Westworld‘s Teddy is one cute, sharp-cheekboned cowboy. But, if things continue apace, he’s going to have to rely on more than his looks, manners and tragic backstory to keep the love of his country cutie.

See, Dolores is becoming a sentient being before our very eyes — a development that Sunday’s episode, “The Stray,” makes rather clear. And her fledgling personhood means she’s no longer swayed by her beau’s scripted promises of how they’ll be happy “someday.”

Dolores needs someone with whom she can discuss the jarring flashes of memory that stop her in her predestined tracks. Someone, aside from Bernard, who marvels at how her programming is making her more than she is supposed to be. Someone, perhaps, who can offer comfort on the inevitable day when young Miss Abernathy realizes that her sole reason for existing is to cater to humanity’s basest desires.

In other words: Teddy? Time to human up, or you just might lose your almost self-aware girl. Read on for the hour’s highlights.

THROUGH THE LOOKING GLASS | Bernard and Dolores meet, and he gives her a book: Alice in Wonderland. “I used to read this story to my son at night,” he says, looking quite sad. Apparently, they’ve read other books together, too, and most of them have been about change. She asks where Bernard’s son is now. His answer: “Nowhere that you would understand, Dolores.” (Side note: Someday, I will get over Evan Rachel Wood’s amazing ability to shift into and out of analysis mode. Today is not that day.)

The next morning, Dolores wakes up like usual, but she finds the gun she unearthed in the backyard last episode wrapped in a cloth in her dresser. “Do you remember?” a voice in her head says, and she has a flash of The Man in Black dragging her into the barn the night (nights? Ugh. I never before considered that he might’ve played out the same rape fantasy over and over, and now I hate him a little more) he showed up at the farm.

Meanwhile, Teddy and a female bounty hunter (who’s a park guest) kill a rather tall bad guy and then head into Maeve’s saloon for a drink. The madam is back to work as usual after her naked, terrified interlude at the end of the previous episode, but when Teddy hands her a coin, she has a vision of his decomissioned body propped up against the corner of the hose-down room at Westworld central.

THE BALLAD OF T & D | Maeve shakes off the disturbing image, and Teddy goes out into Sweetwater’s town square just in time to pick up that pesky can that keeps dropping out of Delores’ saddle. Things follow the usual script until they’re out on the prairie, and he says that “someday” he’ll take her away from everything they know. And that’s when she calls him out on the vague promise. “Let’s not go someday, Teddy. Let’s go now.”

But thanks to Dr. Ford, Teddy now has a specific tragic past instead of the vague tragic past originally in his programming. (Ford casually refers to it as “just a formless guilt you will never atone for,” which makes me laugh.) He alludes to some “reckoning” he needs to do before they can pursue a future, but before we hear anymore, that robbery is going down at the Abernathy homestead again.

This time, Teddy saves Dolores from the bad guys, then takes her out into the field to show her how to shoot. But when she tries to pull the trigger, even though she wants to, she is physically unable to do so. Pretty soon, the female bounty hunter and the sheriff are riding up and asking Teddy to join them on a hunt for a man who might be Wyatt — aka Teddy’s new nemesis, thanks to Ford’s backstory machinations.

“Promise me you’ll come back,” says Dolores, who seems so damn sad. Self-awareness is no picnic! “I’m gonna come back for you someday soon,” he vows, and if you ever need a visual for “disappointment,” just take a gander at Dolores’ face when Teddy utters the “s” word. 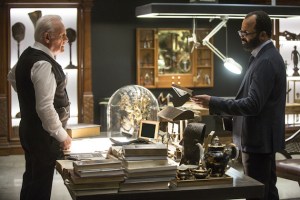 BACK IN THE DAY | Let’s take a break for a whole lotta exposition, courtesy of Ford. When Bernard notes that the hosts who’ve gone berserk have all mentioned someone named “Arnold” in their ravings, the park’s founder says that they’re likely referring to his partner in the early days of the park. In a flashback that features such a good CGI de-aging of Anthony Hopkins that I half expect it to start spouting off about census takers and chianti, we learn that Ford’s partner “wanted to create consciousness” in the androids via a gradual process that started with them hearing their programming as an internal monologue.

Problem? “In this place, the last thing you want is for the hosts to have consciousness,” Ford points out, noting that some of the hosts thought they heard the voice of God and went nuts. Arnold died in the park. “His search for consciousness consumed him totally,” Ford notes before reminding Bernard not to “make Arnold’s mistake” and think there’s a burgeoning humanity behind those machine-crafted eyes.

Then Bernard goes upstairs to have the saddest videophone conversation ever about his dead kid. Not even the fact that his (ex?) wife is played by Firefly‘s Gina Torres can help me get past this scene without tearing up and wanting to hug my kid. Later, Bernard wonders aloud to Dolores whether him helping her along the path to consciousness is a good idea. But after she talks about how she’ll be “free” when she discovers who she is, he stays the path.

NO THANKS FOR THE MEMORIES | Back to the hunt for Wyatt! The good guys get ambushed after coming across some rotting bodies strung up along the trail. It’s pretty scary — especially when Teddy shoots them and they appear not to die. Are they newcomers?

When Teddy doesn’t return to town, Dolores goes home by herself, interrupts the robbery and sees her dead father on the ground… but has a quick vision of the old host who played her father lying in the same position. The head outlaw drags her into the barn, where she lands on the hay next to a gun — and this time, she’s able to fire it at him, hitting him in the throat. As she makes her getaway, she has other confusing memories of taking a bullet to the abdomen herself, then she hops on her horse and flees.

Much later that night, William and Logan are camping out on an expedition. Logan’s tiresome complaining about how much synthetic tail he’s missing out on is cut short when Dolores, who doesn’t look so great, wanders into their campsite and falls into Williams’ arms.

BETWEEN A ROCK AND A DEAD PLACE | When a “stray” host can’t be recovered and heads out into the wilderness, Bernard sends Elsie and Stubbs to grab him. They find him in a crevasse and deactivate him; when Stubbs rappels down to cut off the big guy’s head (ew, but practical), the rogue host wakes up and starts to fight back. He makes his way back up onto the ledge, grabs a small boulder and makes it seem like he’s going to pound Elsie into a smooth paste… then he repeatedly brings the heavy rock down on his own head. Wha? Maybe it has something to do with the constellations he’d been carving in his tent?

Ready for the next episode? Read the Westworld Season 1, Episode 4 recap here!