Carl’s earnest entreaty be damned, The Walking Dead’s Negan went into the Season 8 finale more determined than ever to fill a mass grave with members of the AHK alliance. So, even if Rick decided to heed his son’s advice, would he get the opportunity to give peace a chance? And which, if any, other characters would draw their last breath as the war at long, long last reached the conclusion that showrunner Scott Gimple was so anxious about? Would we finally learn the significance of that semi-suicidal shot of Rick back in “Honor”? Read on and find out.

‘THANK YOU’ | As “Wrath” opened, Rick flashed momentarily back to his walks with little Carl. In present-day, Rick and Siddiq both just happened to be checking on Grace at the same time. The former, having so recently read his son’s dying missive, bit the bullet and asked how he’d gotten bitten. Siddiq explained that he’d told Carl his mother believed souls were trapped inside walkers, and to earn his trust, the boy had disregarded the danger to help him free some of those souls. In other words, Carl “died paying respects to a woman he never knew.” But then, Siddiq added, once they’re gone, “all that’s left of the people we lose… are their ideas.” (Cue Rick thinking, “A truce with Negan? Hmm.”) In the courtyard, Henry promised Carol that he wouldn’t run away again if she came back to the Kingdom after beating the Saviors that day. Nearby, Morgan lost it worse than we’d ever seen, flipping over Alden and some other Savior captives’ return from clearing walkers by accidentally knocking Henry on his ass. While Maggie made it clear to Alden that he and his pals weren’t part of their group, and would be staying behind when the AHK alliance marched into battle, Rick gently suggested to Morgan that he, um, not come with them, either. In response, Morgan said that he had to go, too, adding, “We are worse than we are, me and you.” He understood that Rick had had to give his word that he wouldn’t slaughter all those Savors that they’d slaughtered back at the bar. It had been necessary but wrong. They’d both crossed into that, Morgan suggested, because they’d lost everything — everything good, anyway. “What does it matter if we spend whatever’s left keeping people alive?” Rick countered that they hadn’t lost everything, but Morgan wasn’t hearing it. “We can’t go back,” he insisted, “so let’s just finish it.” 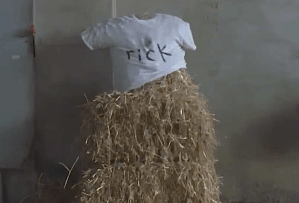 ‘THE DEED IS DONE’ | At the Sanctuary, Eugene, in full-on office-manager mode, happily reported to Negan that his order had been filled. Not only that, but he had a loaded gun at the ready for the boss to try out on a makeshift Rick target and an idea about how the Saviors could minimize chaos with a firing-line style formation. Did Eugene really to want to tag along to watch his old pals get gunned down? Negan asked. “More of a need-to thing,” replied the lily-livered mullethead. En route to the battlefield, Negan, like most supervillains, couldn’t resist explaining in detail his master plan — in his case, to Eugene and Gabriel. The baddie had set up a roadblock crew of his own men as sacrifices. (So much for “People are resources,” eh?) Once the AHK alliance had offed those guys, they’d believe that their intel had been correct, use the map left at the scene and come after Negan. “That is the trap,” he said. “And that is how we will get them.” When Laura swerved the car to avoid a walker, Gabriel seized his opportunity to make a break for it and threw himself out of the moving vehicle. Meanwhile, at the roadblock, Morgan continued to be taunted, this week by a vision of Jared, who jeered that he couldn’t kill his way out of his torment. And, as Negan predicted, Rick & Co. found the map that he’d left behind. 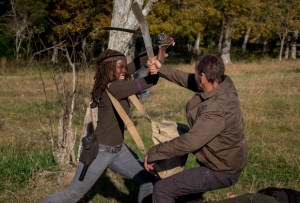 ‘I AMBUSH YOUR AMBUSH WITH AN EVEN BIGGER A-BUSH’ | Gabriel hadn’t gone 20 steps into the woods when he ran smack into a walker and was apprehended by Laura and Eugene, who threatened to shoot him on the spot. “Where does your faith go when you truly need it?” Eugene spat at the preacher. But he wasn’t going to get to kill his old friend. Negan called dibs and warned that Gabriel’s prayer not to die a fruitless death wasn’t going to be answered. At the same time, trudging toward D-Day, Jesus proposed to Morgan that he use the pointy end of his stick for the dead and the blunt end for the living. “I’m starting to like the guy,” said Carol. (Eye roll.) While Saviors descended on the unprotected Hilltop, Rick and most of our main characters were surrounded by that once-chilling Negan whistling that I’m pretty sure at this point we’re all just about over. But this time, it should really have been scary — Negan had them surrounded. Before killing them, he wanted to play master of ceremonies, thanking Eugene for his efforts, revealing Dwight’s big mistake and announcing that Gabriel was on the chopping block, too. “Three… two… ” Negan counted down. And on “one,” he discovered that all of the Saviors’ ammo had been rigged to backfire on them. (OK, I take back every awful thing I ever thought about Eugene.) As the Hilltoppers took flight, Grace crying loud enough to be heard in New Jersey, Tara doubled back to try to slow down the Saviors; to her surprise, Alden was going back, too, as were his fellow prisoners. Just then, Aaron returned with the Cyndie and the Oceansiders, allowing Rachel to do what she loves best (kill! kill! kill!). On the battlefield, the Saviors surrendered, leaving Rick alone to chase Negan to the site of that mysterious shot under the tree. 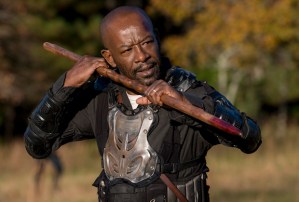 ‘EENY MEENY MINY MOE… THAT WAS BULLS—’ | After Negan beat the crap out of Rick, he revealed that his introductory game of eeny meeny miney moe had been for show; he’d made a choice not to kill Carl’s dad in front of him. Though he couldn’t have seemed any less sincere, being as weak as he was, Rick chose that moment to plead for a new beginning, just like Carl had wanted. Negan stopped to consider it, and in that instant, Rick slit his throat. Afterwards, Rick saw Maggie and pretty much everybody in the AHK alliance watching. “Save him,” Rick told Siddiq. This did not sit well with Maggie, who absolutely broke down. “It’s not over till he’s dead,” she cried. In response, Rick quoted Carl, saying that there has to be something after. “We’re all gonna go home now,” he said. “Negan’s alive, but his way of doing things is over.” (Who knew you could recover from a slit throat?) “What happened to their guns?” Rosita asked Eugene. “Was that you?” Yup. He’d created “a modicum of phooey.” Rather than thank him, she slugged him — but only for puking on her. Before setting off, Morgan gave his armor to Carol to give Henry, along with an assurance that he’d be all right. Next, we got a familiar glimpse of a red-eyed Rick mumbling, “My mercy prevails over my wrath” and weeping beneath the tree. (So he hadn’t tried to kill himself; that blood all over him was Negan’s and from the battle.) 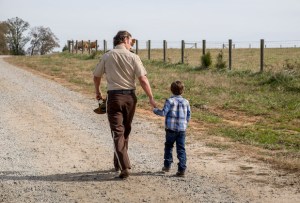 ‘THERE’S NO GOING BACK TO HOW THINGS WERE’ | As the hour drew to a close, Alden told Maggie that his pals were going back to the Sanctuary to try to make something better of it. But “I was never meant to be there,” he said. And, having read A Key to the Future, he offered to help build stuff at the Hilltop. “That’s what I want to do with my life. You gave me that life.” OK, she said. Speaking of the Sanctuary, Tara, Rosita and others showed up to help put it back together. At the same time, Daryl drove Dwight into the woods. “I know why I’m here,” Dwight said. “I know what I did to Denise… to you… to other people.” He wasn’t going to make excuses, he was ready to face what he’d done and pay the piper. “I got to see Negan taken down,” he added. “That’s enough.” When Daryl didn’t kill him in all this time, Dwight started crying and apologizing. Instead of put an arrow in Dwight’s head, Daryl gave him the keys to the truck and told him to start driving and keep driving. “Find her,” he added, a nice reference to Sherry (who seemed to have left him a note at the house at which he’d once looked for her). At the Heaps, Jadis was surprised by a knock at the door: Morgan, with an invitation from Rick to be a part of the community if she wanted to. She asked his name, then told him, “You can call me Ann.” She was going to join Rick’s group, it appeared, but Morgan… he was staying behind. At the Hilltop, Maggie admitted to Jesus that Rick was right about not killing all the Saviors — but not Negan. What did that mean? “We have a lot to do,” she said as ominous music played. The Hilltoppers needed to be able to defend themselves better. With regard to Glenn’s killer, “Rick was wrong to do what he did… Michonne, too,” she continued. So she was going to bide her time and then show him. “Yeah,” said Daryl, emerging from the shadows. “We will.” As Negan recovered, Rick and Michonne threatened to reopen his stitches if he mouthed off while they described the pretty new world they hoped to create, just the way Carl wanted. “You’ll be an example of what this will be,” said Michonne. “You’re gonna rot in a cell,” Rick said. “Evidence that we’re making a civilization.” Over at his wreck of a church, Gabriel thanked God and said he could see — metaphorically, presumably (though the sunlight was awfully bright). As Season 8 drew to a close, Rick voiceover’d a letter to Carl in which he said that his walks with his son had been leading him to a new world.

So, what did you think of the Season 8 finale? Were you disappointed Negan lived? Surprised Maggie and Daryl would plot against Rick? Grade the episode in the poll below, then hit the comments.