The Season 8 finale of The Walking Dead is less than a month away, and so is the end of the AHK alliance’s battle with Negan and the Saviors. “We will see a resolution of the war,” promises executive producer Scott Gimple. “It might not be what people are expecting. It might not be what some of the characters even want. But it is a conclusion, and they have to deal with its aftermath.” 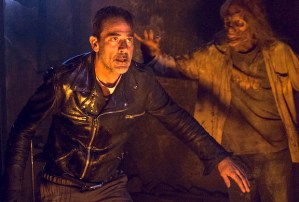 Gimple, who is stepping down as showrunner for Season 9, knows that it will be tough for any resolution to the conflict to satisfy viewers eager to see Glenn and Abraham avenged. “I pray to God that they are satisfied,” he says. “I really hope they are. It is a war. There are casualties along the way, and it is incredibly tough business. But it only shows just how deeply connected these characters are and how their fates are tied together, even if some of them don’t want them to be.”

Though fans might hope that, having so recently lost Carl, they could breathe easy for awhile, Gimple hints that the worst may be yet to come. “I would never tell the audience that it was safe to exhale,” he says. “It is a devastating world that these characters live in, but there is still beauty and hope.”

So, how would you end the war? Which characters would you hate to see added to the list of casualties? Which wouldn’t you mind seeing buried? Hit the comments.