Warning: The following contains potential spoilers for The Walking Dead.

Like many a fan of The Walking Dead, I approached Negan’s Season 6 debut with equal parts excitement and dread — the former because c’mon, it was Negan, the biggest of the comic-book series’ Big Bads; the latter because, if the AMC drama stuck to Robert Kirkman’s source material, the villain’s entrance meant Glenn’s exit. Now, almost two seasons later, I hate to say that I’m way past over the Saviors’ leader. 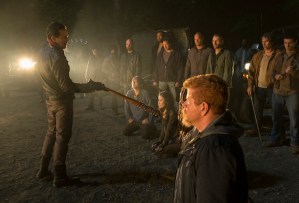 To be clear, that’s not a dis of Jeffrey Dean Morgan, a tremendous actor who’s been everything that we could possibly have wanted from the antagonist. Neither is it a swipe at the writing, which has, where this character is concerned, remained pretty true to Kirkman’s blueprint. It’s merely acknowledging the elephant in the room: that the same pun-loving, bat-wielding scumbag who slays in comic-book form doesn’t necessarily (and in this case doesn’t) work on a weekly TV show.

Moreover, although Carl’s idealistic vision of the future recast Negan as a latter-day Hershel tending to the garden while exchanging pleasantries with Judith, viewers don’t just want retribution, we need it. Negan isn’t a Tara, who’d been along for the ride when the Governor orphaned Maggie and Beth. He isn’t even a Dwight, who fell in with the Saviors in order to keep his wife breathing. No, before our eyes, Negan Lucille’d to death both Glenn and Abraham — and freaking laughed about it. So we aren’t hoping he’ll eventually be redeemed, we’re hoping he’ll be pulverized.

Unfortunately, given Negan’s long lifespan in the comics — and showrunner Scott Gimple’s anxiousness about fan reaction to the Season 8 finale — it seems like we, along with Glenn’s widow, are going to have to get (very) used to having him around. And who knows? Maybe we will come to feel something more than antipathy for him. (I for one never thought I’d empathize at all with Dwight.) But I wouldn’t bet my life on it, much less any of my favorite survivors’ lives.

What do you think? Should TWD cuts its losses and whack Negan? Or would you prefer to see him get a second chance?