There were almost as many revelations as there were zombies in Sunday’s episode of The Walking Dead. Not only did we learn the fates of two key survivors (one of which wouldn’t come as any surprise to most of you), but we found out how Jadis intended to exact her revenge against Negan, saw a total scumbag at last get his just desserts, and “witnessed” the comeback of a character a lot of us probably forgot was even gone. Who was it, and why is “witnessed” in quotes? Read on… 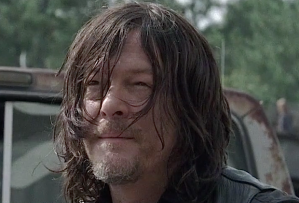 ‘WHAT THE S—?’ | As “Still Gotta Mean Something” began, we flashed back to “The Lost and the Plunderers” for a peek at how Jadis had survived the Scavengers massacre by playing dead. (We also got a glimpse of her immaculate, if spartan, living quarters.) From there, we returned to a present in which she had Negan tied to a mechanic’s creeper — a decent start to any revenge plot. Over at the Hilltop, when Carol declined to go after the escapees in hopes of finding Henry, Ezekiel rightly guessed the real reason — “You think he’s already dead” — and accused her of being too cowardly to hope. Nearby, Tara, still alive and well a day after she was believed to have been infected, insisted to Daryl that Dwight had saved her by shooting her with a clean arrow. Daryl, in turn, insisted… whatever, basically. His murderous intentions toward Dwight were as unchangeable as the channel on a TV with a broken remote. “Do what you gotta do,” Tara said finally, “but know it’s just for you. I’m out.” (And really, forgiving Dwight was probably what Denise would have wanted, anyway.)

Inside Barrington House, Rick found Michonne in tears reading Carl’s letter. When she asked if he wanted to see what was in it, he all but physically recoiled. He was beyond unready to do that, much less to read his own letter from his son. He wanted to go out scavenging. Hearing that, Michonne explained that after she’d lost her child, she’d done the same thing — she’d kept moving to move away from it… until Andrea stopped her. “And now,” she said, “I’m stopping you.” Not for long, mind you. Rick got as far as removing Carl’s letter from the drawer in which he kept it before he snuck out to go after the escapees. Did Alden have any idea where they might have stopped en route back to the Sanctuary? There was an old dive bar, the former Savior suggested before asking a favor: “If you happen to find ’em, don’t kill any more of ’em than you have to.” Instead, show them that they’d made the wrong choice by bringing them back to the Hilltop. Shortly thereafter, when Morgan took off after the escapees, too, Carol decided that she’d tag along. 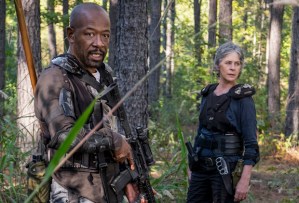 ‘YOU CAN’T SAVE THE DEAD’ | After a telltale turnip led Morgan and Carol to believe that they were following the right trail, the former spotted Henry in the distance. When Morgan caught up to the boy, he’d been bitten — and had picked up where Gavin had left off saying, “You know what it is. You were supposed to.” (At this point, that broken record is making me nostalgic for the episode in which we heard “Easy Street” on repeat.) Also, like Gavin hadn’t been, Henry wasn’t really there. Poor Morgan really was not doing well. Shortly, he and Carol came across a walker, still animate, with Henry’s stick protruding from its abdomen. As bad an omen as that was, Carol nonetheless tried to raise Morgan’s spirits by suggesting that they could still find the kid. Nah, Morgan replied. “You save people. I watch ’em die.” He wouldn’t even let her give him credit for saving her when she left Alexandria. “That wasn’t me,” he insisted. “I’m not strong like you.” Ultimately, Debbie Downer left Carol to chase after Henry while he set off to eliminate the escapees.

Meanwhile, at the Heaps (which I only just learned is what the junkyard is called), Negan offered Jadis as good an apology as I think we could conceivably expect from him. The killing of her people, that wasn’t him, he added. “That was the work of someone not following the program.” (Simon, I fear your magnificent eyebrows’ days are numbered!) When Negan realized that Jadis intended to reduce Lucille to ashes and barbed wire, he freaked. But, since Jadis’ plan had more holes in it than Swiss cheese, he also easily got hold of a gun and a flare… which he used to threaten her snapshots (of her late friends, I presume). At a stalemate, she cried, “You took away everything — you took away me.” In response, Negan opened up about his wife Lucille getting him through life — and the bat he’d named for her getting him through the grisly imitation of life that had come after. That bat, he said, was his equivalent of her photos. When the chopper last seen in Episode 5 appeared overhead, Jadis wrestled away the flare from him but was too late to get the pilot’s attention. (It seemed as if she’d been expecting it, right?) This left her all the more eager to hurt Negan. Only, when push came to shove, she folded like a lawn chair. So much for that revenge plan. 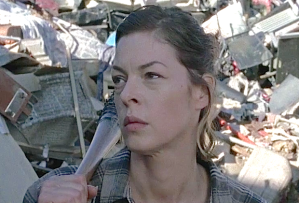 ‘YOU POOCH IT, NOBODY CARRIES YOU’ | In the woods, Rick bumped into Morgan, who was so wild-eyed and out of it that he hardly needed to tell his friend, “I’m not right.” Still, they decided to team up and finish off the escapees, an endeavor that led them to discover… hmm… a severed hand and foot. Before they could figure out what had cost that arm and a leg, they were knocked out and tied up in the bar by Jared and the escapees, some of whom had had appendages lopped off to prevent walker infection. Though the Hilltop’s former hostages were well aware that they were persona non grata at the Sanctuary, Jared felt that they could make themselves MVPs by delivering to Negan “Rick the Prick.” Ooor, said Rick, they could take his truck and get the injured to the doctor at the Hilltop, and be welcomed back to the community. “We’ll give you a fresh start,” he promised. Jared didn’t just call bulls— on that offer, he called “steaming pile of bulls—.” Yet, when the herd that had been approaching arrived, some of the escapees sided against Jared, freeing Rick and Morgan to help dispatch the walkers. Once that immediate threat had passed, Rick and Morgan turned on the escapees, murdering them in cold blood. At least Jared deserved what he got: Morgan held him against a folding security gate and watched as walkers tore the flesh off his no-longer-quite-as-smug face.

In the aftermath, Rick reached out to Morgan, reminding his friend that he’d saved him way back when. Why had he done so, even with his son there? “Because my son was there,” replied Morgan, that answer hitting Rick like a ton of bricks. As the episode neared its conclusion, Negan, by then freed, invited Jadis to leave with him. She declined, but “I’ll swing by again sometime,” he said. That night, Carol returned to the Hilltop — with Henry in one piece. After the boy was reunited with father figure Ezekiel, Carol related to the king the difficulty she’d had finding herself again after Sophia’s death, and her fear that history might repeat. “But that doesn’t mean it will,” she forced herself to acknowledge, “and it doesn’t mean that I couldn’t find myself again if it does.” Just then, a blood-spattered Rick and Morgan returned. As Alden eyed Rick, clearly guessing what had transpired, Morgan told Henry — after ascertaining that the boy wasn’t a figment of his imagination — “I killed the man who killed your brother.” Henry’s response: “I’m sorry.” 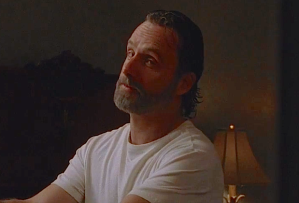 ‘DADDY’S HOME’ | Finally, en route back to the Sanctuary, Negan picked up someone at the side of the road. We didn’t see who it was, but apparently, it wasn’t a pretty picture. “If s— could s—,” Negan cracked, “it still wouldn’t look as s—ty as you.” I’m thinking it must be Laura, since she’s the only person who knows about Dwight’s treachery. I’m also thinking Laura because Negan kept his traveling companion hidden when he rolled back into the Sanctuary. He didn’t want anyone to know he was alive, either. He had all sorts of surprises in store for his peeps! At the same time, Daryl and Rosita were scoping out Eugene’s bullet factory. They’d take out the Saviors there, Rosita said, but not the machines. Those would come in super handy. Back in Alexandria, Rick apologized to Michonne for not staying stopped when she stopped him and at last sat down to read Carl’s letter. Something tells me the one-two punch of Carl’s “play nice” message and Rick’s having just slaughtered a bunch of people who were trying to team up with him is going to lead us straight to the semi-suicidal-looking shot with which “Honor” ended.

What do you think? Will Rick try to take his own life? Having lost herself, is Jadis more poised than ever to become Alpha? Was that Laura that Negan picked up? Hit the comments.