Who knew? Sunday’s episode of The Walking Dead revealed that, for all of the Saviors’ bloodlust and tough-as-leather posturing, Negan’s organization is run pretty much like The Office’s Dunder Mifflin. (All they were missing was a water cooler and a perky receptionist.) “The Big Scary U” also filled us in on what happened to Gabriel after he made the mistake of choosing Negan’s trailer as a Season-8-premiere hiding place, brought to a head the mounting tension between Rick and Daryl, and really kinda made you want to see Michonne. Why? Read on…

‘I LIKE KILLIN’ PEOPLE’ | As the hour began, Simon set out to prove that he isn’t half as smart as he is mean by sincerely backing the patently-unreliable Gregory in the Saviors’ staff meeting that directly preceded the allied forces’ assault in “Mercy.” Even though Negan rightly guessed that the Hilltop’s “leader” was but a “thin-d–ked politician” playing both sides of the conflict, his right-hand man still stood by Gregory, suggesting that they could solve the Maggie problem by heading to the Hilltop with a show of force and slaughtering whoever didn’t fall in line. Suddenly, Negan became scarier than arguably we’d ever seen him, slamming Lucille against the table to make the (exclamation) point that they couldn’t go around slaughtering their resources. “Are you confused about who is in charge?” he then asked Simon, whose sack you could damn near hear shriveling up. “Are we backsliding?” Finally, just as the rebel alliance was about to make its presence known outside, Negan announced that Plan A — the only acceptable plan — was to capture Rick, the widow and the king alive and then make them “dead in a very, very public and instructive way.”

‘WHAT I FEAR IS A FRUITLESS DEATH’ | From there, we cut to Negan’s RV, right after he gave Gabriel his “s—tin’ pants” speech in the Season 8 premiere. Moving quicker than he talks, the villain got the jump on the preacher and, upon disarming him, expressed surprise to see that he had not only a gun but a full clip. Since the adversaries couldn’t go anywhere and we’d just been fed a Negan speech about how people were money in the bank (therefore, he couldn’t “Lucille” Gabriel), the duo started the arduous process of getting to know one another. Sample banter (and actual dialogue): “Your friend Rick is an asshole.” “You’re an asshole.” While somewhere, Oscar Wilde wept, Gabriel suggested that perhaps his ultimate purpose in life was to hear Negan’s confession. Before we got to that — and you just knew we would — we had to get through Negan’s whistling, Negan’s prediction (“If my people think I’m dead, a lotta folks are gonna die in [the Sanctuary]”), Negan’s theory (everyone is a mixture of strength and weakness), Negan’s backstory (he used to work with kids?) and Negan’s plan for the future (lucky Gabriel was to be his next project).

‘THAT IS WHAT I WILL CONFESS’ | After Negan argued that he’d never “killed anyone who didn’t need it,” Gabriel distracted him by asking if he’d had a real wife before his harem, and went for his gun. The ploy didn’t put any new holes in Negan, but it did allow Gabriel to dash into another compartment. Since time was running short — by then, walkers were reaching into the RV as zealously as we grab Cheetos out of a vending machine — Negan enticed Gabriel to join him on his flight into the Sanctuary by making at least a mini-confession: Yes, before the apocalypse, he’d had a wife, an ailing one on whom he’d screwed around. And when she died and turned post-apocalypse, he hadn’t been able to put her down. “That,” he concluded, “is how I was weak.” In response, Gabriel offered him forgiveness, the two of them covered themselves in walker guts, and out they lurched into a sea of the undead. Meanwhile, inside the Sanctuary, Regina suggested during a staff meeting attended by Simon, Dwight, Gavin and Eugene that they use workers to clear a path through the horde for a small team to reach the outposts and return with “the fat lady.” Bad plan, argued Dwight — the workers had the numbers and had to be kept on management’s side. 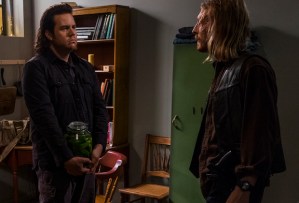 ‘GOOD MEETING, PEOPLE’ | For his part, Gavin was mostly concerned with figuring out who’d shared intel with the rebel alliance, in so doing, setting in motion this whole mess. After all, he noted, “the right kinda rat can kill” as many people as a gun. Clearly, Eugene, who not that long ago was an Alexandria resident, was the prime suspect. But, rather than throw him further under the bus, Dwight went on the offensive and barked that, if Simon couldn’t lead the Saviors out of the Sanctuary, he’d do it himself. Delighted by Dwight’s bravado, Simon adjourned the meeting with what sounded like a saying from one of Sue Heck’s inspirational posters: “Now let’s make today the best today it can be!” (And people say Jadis is weird!) Post-meeting, Eugene went to Dwight’s quarters to thank him for having his back and inadvertently got paint on his fingers from a toy soldier the scarred Savior had been decorating. Which seemed too pointless to even mention in a recap — until later. Which actually came pretty soon. When the workers broke the rules and left the factory floor to confront their overlords upstairs, all hell appeared to be about to break loose (as Negan had predicted). But then, in strolled the boss man, covered in walker guts and accompanied by Gabriel. 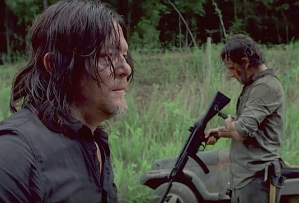 ‘THANK GOD FOR YOU!’ | Once the workers were done genuflecting and thanking Negan for continuing to exist, and Gabriel had been gently escorted to a cell, the Saviors held yet another meeting. During this one, they deduced that none of the rank and file could possibly have gotten out of the armory as many guns as the allied forces now had. So whodunit? While Negan seemed to smell a rat-like scent coming off of Simon, Eugene spotted on Gabriel’s bag a paint stain that pointed a finger at Dwight. However, rather than tattle, Dr. Smarty-Pants merely glared at the Savior whose johnson he’d once bitten. Following the powwow, Eugene delivered to Gabriel’s cell some welcome-wagon items, only to discover the priest deathly ill. On the plus side, Gabriel seemed sure that he’d figured out his purpose: It was to get Carson 2.0 out of the Sanctuary to treat Maggie. In the episode’s other plot, Rick and Daryl found dynamite among the weapons they’d intercepted from the Saviors in “Some Guy.” Great, thought Daryl. They could blow up the Sanctuary, let walkers flood in and “end this by sundown.” Uh-uh, replied Rick — there were workers in there, families. He wanted to stick to the plan, so much so that he physically fought Daryl for the TNT and hurled it at the burning Jeep before setting off on foot to make his “last play” (apparently, a confab with Jadis). En route to the junkyard a chopper flew over his head — “the fat lady,” maybe?

What did you think of “The Big Scary U”? Anybody else feel like we’ve gone too long without seeing Michonne? (Hell, I almost miss Rosita at this point!) Hit the comments.