Warning: The following contains spoilers for the Season 8 premiere of The Walking Dead. If you’ve yet to watch, pretend Negan’s about to take a swing and look away.

The Season 8 premiere (and 100th episode) of The Walking Dead was filled with inspiring fighting words about how the world belonged to Rick and our heroes, the allied forces were going to live in peace and harmony, they’d all be together forever, yadda, yadda, yadda. But the all-cried-out look in Rick’s red-rimmed eyes, seen in (I think) flash-forwards, served as a stark reminder that turning all that talk into action wasn’t going to be painless. Who did it appear that Alexandria’s embattled leader would be mourning next? Read on…

‘THIS IS THE END OF IT’ | As “Mercy” began, we were shown not only a teary-eyed Rick but also the grizzled-old-man Rick of the Season 8 trailer — aside from the cane, he seemed fine, by the way, unkempt but happily cohabiting with Michonne, Carl and Judith — and, last but not least, motivational-speaker Rick, the one who promised Alexandria’s allies as they prepared to strike back at the Saviors that only a single person had to die in the skirmish. And “I will kill him myself,” he swore. He was so eager to get to it, in fact, that when Carl, out siphoning gas, happened upon a scared-silly stranger (given his mention of the Koran, presumably Abbud), Rick ticked off his son by firing warning shots to get rid of him and get on with it. If only the teenager could have stayed as focused as Maggie, who was determined to be a part of at least this first siege. “They say you can wage war through the second trimester,” she joked before thanking Rick for showing her “how to be someone worth following.” Talking with Gabriel, Rick marveled at all of the bloodshed that had been brought about by one man. Then again, the preacher replied, the righteous revolt against that one man had been brought about by a single individual, too. Only Rick had not made it all about himself but about all of them. 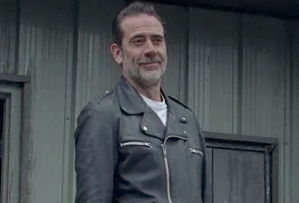 So what, exactly, was the plan of attack? Leaving a recuperating Michonne to safeguard Alexandria with Carl, Rick would help Daryl and Morgan dispatch the Saviors’ lookouts, then lead right up Negan’s driveway a battalion on wheels — now equipped with shields that the B-52’s might have called “tin roofs, rusted.” Meanwhile, Carol and Tara, it seemed, were to rig explosives along a path to the Sanctuary for Daryl to blow up at go time, using the blasts to direct a horde of walkers to the Saviors’ compound. What could possibly go wrong, right? Though the walkers were a smidgen late — they’ve never been known for their punctuality, have they? — the plan started off fine. The first explosion drew away from the Sanctuary Negan’s attack dogs (one of whom radioed that she was hungry for some “bang-bang, scream-scream”). Then our heroes rang the doorbell post-apocalypse style — with a kind of 201-gun salute. And at last, out came Negan, flanked by Eugene, Dwight (who’d been trading messages with Daryl via arrows), Simon, Gavin and Regina.

‘YOU DO WHAT YOU NEED TO DO’ | If I were Negan and I was standing in front of that many armed people who wanted me dead, I’d for sure have been using Eugene as a human shield. But I’m not Negan, who didn’t seem remotely concerned about being shot. Rather, he sounded almost like a rational politician when he suggested to Rick that he wasn’t about to march his people into the line of fire just to play a game of “My d–k is bigger than yours.” (His was bigger, he added. “We both know it.”) Rick countered that the Saviors could all walk away with a pulse if and only if they surrendered right then and there. Again unfazed, Negan trotted out Gregory to demonstrate that Rick didn’t have the numbers to win this fight. (“Of course that’s where he went,” Jesus said to Maggie, his tone the equivalent of an eye roll.) Though the weasel warned the Hilltoppers that if they didn’t go home now, they wouldn’t have a home to go back to, nobody budged. “The Hilltop stands with Maggie!” cried Jesus, prompting an annoyed Simon to (do what we all wanted to and) shove Gregory off their perch. 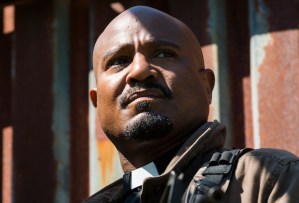 ‘YOU’RE GONNA MAKE ME COUNT?’ | Eventually, Rick began counting down from 10 to get a decision out of Negan and his cronies. But, tiring fast of that nonsense — Negan wasn’t a toddler like Judith! — Rick gave it up at 7 and opened fire. And though it seemed not a single member of the firing squad could hit the villain, they did manage to shatter every window we could see. Once Rick had set off a big explosion close to the Sanctuary, he spotted Negan, seemingly injured and cornered, and was going to keep shooting until the bastard was deader than a doornail. Or at least that was what he intended to do until Gabriel pulled him away, reminding his friend that this wasn’t about him. Before Rick left Negan to be done in by the walkers, he took a quick Polaroid. (Because, apparently, he’d expected to have time during the siege to take a snapshot?) At that point, our heroes began pulling out and heading home. Gabriel was just about to do that, too, when he spotted a pitiful Gregory begging for help. Rather than leave him to give the walkers indigestion, the priest moved to rescue him, only to have the snake in the grass turn around and steal  his car!

With no way out, Gabriel had to find a place to hide fast, and sought refuge in probably the unsafest place imaginable: Negan’s trailer. “I hope you got your s—tin’ pants on,” said the villain, who’d apparently made his way to safety, “’cause you are about to s— your pants.” From there, we again cut to both old Rick with his family and red-eyed Rick, recalling what I took to be a Gabrielism: “My mercy prevails over my wrath.” Hopefully, the good deed with which Carl ended the premiere won’t turn out as badly for him as Gabriel’s did: The teen returned to the gas station, leaving food and a “sorry” note for the stranger he’d almost met earlier (and since the guy was watching, Carl seemed sure to meet later). Finally, as the gang moved on to Phase 2 of their plan, Ezekiel, Carol and some Kingdommers fired at someone at a Saviors’ sentry post, that someone in turn tossing a grenade and (presumably) escaping in its cloud of smoke. (Just me, or did it seem like the someone hadn’t thrown the grenade very close to his pursuers? Maybe a good guy?)

So, what did you think of the Season 8 premiere? Do you think there’s a snowball’s chance in hell Gabriel survives? Grade the episode in the poll below, then hit the comments.