Question: I’m having Walking Dead withdrawal already. Help! —Nick
Ausiello: Help is on the way, Nick — literally. Ahead of Season 8’s Saviors/Scavengers-vs.-Alexandria/Hilltop/Kingdom war, AMC’s monster smash is casting two new recurring good guys: Dillon, a sexy, blue-collar twentysomething whose survival skills include sarcasm, and Abbud, an innately likable Muslim American whose nerves are, let’s say, jangled, because he’s flown solo for too long in zombieland. Of the pair, the former is likelier to survive the looming conflict — not only does Dillon sound like a less jerky Spencer, but the casting notice for the roles hints that the actor chosen might get picked up for subsequent seasons.

Question: Will we see Rumple and Belle in Once Upon a Time‘s musical episode? —Phyllis
Ausiello: Series co-creator Adam Horowitz told Matt Mitovich that for reasons that are extremely spoilery, Gideon’s mom and pop will be “laying low” during the musical wedding episode, airing Sunday, May 7. “They’re not out in the open,” he said, “but we will definitely see Rumple in the episode.”

Question: Will the Once Upon a Time finale have “some” closure to it in case things don’t work out in the negotiations? Not only do the characters need happy endings, but this girl wants some too. —Alicia
Ausiello: Asked and answered.

Question: Anything about John Barrowman’s return to Arrow? —Rory
Ausiello: Only that A) he still slips oh-so-easily into the lair, and 2) he stands to be either friend or frenemy to Team Arrow as the Prometheus arc hits its climax. “The last time Oliver and Malcolm saw each other, Malcolm helped them at the end of Season 4 — but he also went after Oliver’s son in the middle of Season 4,” showrunner Wendy Mericle reminds. “So always with Malcolm, you never know where you stand. You’re always a little bit off balance even if you think he’s on your side.”

Question: Should we be worried about The Flash‘s Joe surviving the season? —Chris
Ausiello: More pressing, you might worry about him surviving a sticky situation with girlfriend Cecile in the next episode, amid all the Killer Frost drama. “We have a little situation where she said the magic words” — I love you, for the uninitiated out there — “and Joe wasn’t able to say the magic words back,” Jesse L. Martin shares. Based on this brand-new photo, Joe may want to get clear on his feelings and quick! 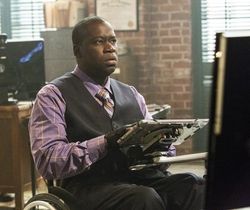 Question: Any scoop on the NCIS: New Orleans season finale? —Semaj
Ausiello: A little birdie with very loose lips tells me that we will meet Investigative Computer Specialist Patton’s ex-wife in the closer.

Question: I was a huge Drake and Josh fan, so I freaked out over John Stamos’ photo of Drake Bell on the Fuller House set. Is he going to be in Season 3? –Allison
Ausiello: Sorry to burst your bubble, Allison, but I’m hearing that Bell was merely visiting the set, rather than filming a guest spot (or even a cameo). Alas, you’ll just have to re-watch his episode of Grandfathered for your Bell-Stamos fix.

Question: Does the fact that Diane and Kurt got back together in the Good Fight finale mean that we’ll be seeing more of Gary Cole in Season 2? —Robert
Ausiello: “That is such a good question for the showrunners of Veep,” exec producer Michelle King hedged with a chuckle when I posed your question to her. The good news? As fellow EP Robert King notes, “He was doing Veep while we shot Season 1 and we were able to skirt around that and use him when we could. So we’re intent on making that work again.”

Question: Any chance Silicon Valley will finally pull the trigger on a full-blown Richard/Monica romance? I know it’s not that kind of show, but I still find myself pining for them. —Carrie
Ausiello: “Sadly, there’s no Richard/Monica this season,” Thomas Middleditch reveals. But — and this is a big, potentially hairy butt — the actor teases that “there is a little bit of sauciness” in his alter ego’s future, before outright confirming, “Richard has full blown sexual adult intercourse with a new” love interest. How much will we, um, see? I think it’s safe to say that we don’t go full HBO,” Middleditch assures me, “with t–s and d—s everywhere.” BONUS SCOOP: Dinesh is getting a new sweetheart, too!

Question: Josh has every right to be mad at Liza on Younger, but I have to know if there’s any hope for my favorite couple on TV. –Julie
Ausiello: There’s always hope, Julie, especially since we’ve got (at least) two more seasons to spend with the Younger gang. That said, Season 4 will introduce us to Clare, a sexy, age-appropriate Brooklyn bartender who falls pretty hard for Josh. In other words, if Liza wants to win him back, she’s got her work cut out for her.

Question: Scoop on the final episodes of Season 4 of The Blacklist, please! Will all members of the task force survive this season? — Aly
Ausiello: Though series creator Jon Bokenkamp is staying mum about who survives May sweeps (or doesn’t), he says the final Season 4 installments are “massive in scope” and will put just about everyone in danger. Agent Ressler, in particular, will find himself vulnerable when he teams up with a former colleague (played by Without a Trace alum Enrique Murciano) and proceeds to head to the heart of an investigation he probably should have avoided. 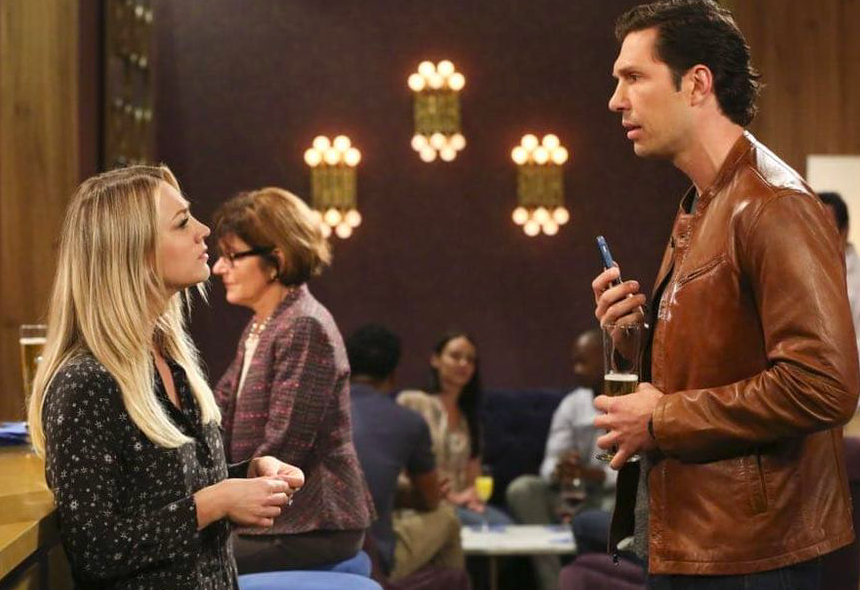 Ausiello: As you know, Penny’s ex Zack (Brian Thomas Smith) returns in this Thursday’s ep and makes her a job offer she might not be able to refuse, which, naturally, turns Leonard into a nervous pile of jealousy. “Penny doesn’t like certain aspects of being a pharmaceutical sales rep, like flirting with doctors and fudging the truth about side effects,” explains showrunner Steve Molaro. “Zack offers her a chance to head up the sales division of his menu company. She has sales experience, she worked in a restaurant. It’s kind of an ideal job, except for the part where she used to sleep with her would-be boss.”

Question: I’m dying to know about Chicago Fire! Got anything good as we near the end of the season? —Julia
Ausiello: Well, here’s one thing we can rule out for “Dawsey” this season: a baby. Asked if the couple will have another discussion about expanding their family, exec producer Derek Haas replied, “That’s going to continue into next season. But for now that storyline has kind of been… dropped isn’t the right word, because it’s always there. But we’re not going to go there as far as, like, [making it a] cliffhanger.”

Question: Got anything on Supernatural? —Sudha
Ausiello: If you’re thinking Mr. Ketch has developed feelings for Mary and might spare her life and the lives of her boys, think again. “With Mr. Ketch, there’s a really strong dividing line between personal and professional,” executive producer Andrew Dabb says. Although the Brit “does kind of respect and admire and like” Dean and Sam’s mom, “he’s been conditioned his entire life to follow orders. So for him to take a stand against following an order like that, it would be really a drastic change to his character. I’m not saying it might not happen, but he is not the one with a very obvious soft underbelly. When the chips are down, he’s going to revert to what he’s very comfortable with, and that’s doing as he’s told and killing a lot of people.” 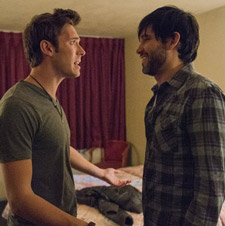 Question: I’m dying, waiting for Nashville to come back! Got any scoop? —Linda
Ausiello: The CMT show is looking for child actors to play Gunnar and his brother Jason (R.I.P!), which makes me think the troubadour might flash back to his own childhood as he considers his status as Scarlett’s (possible) baby daddy. Also, Nashville is casting a women’s self-defense instructor for an upcoming episode: Might one of Music City’s lovely ladies be using Rayna’s (also R.I.P!) experience with her stalker as a cautionary tale?

Question: You’ll probably skip past this question because you never really talk about this show, but got an Elementary scoop? —Doug
Ausiello: Skip past? Pshaw. More like run toward. This Sunday’s episode promises to be a big one for Jon Michael Hill’s Detective Marcus Bell, whose girlfriend has been physically assaulted and remains unconscious. “Of course, all eyes are on her ex-husband Roy,” previews executive producer Rob Doherty. “And Marcus is understandably upset and angry and wants to be part of the investigation.” However, “an emotional cop tends to make mistakes,” the EP notes, so “while the police are conducting the official investigation, Sherlock enlists Marcus into a separate and perhaps more compelling investigation into Roy.”

Question: Is The Leftovers going to bring back its opening theme song before the end? Or is it gone for good? —Christopher
Ausiello: Sadly, Iris DeMent’s haunting Season 2 theme “Let the Mystery Be” has been retired. The pattern set by the first two Season 3 episodes — wherein a completely different piece of music (including the Perfect Strangers theme) played over the opening — will continue through Episode 8. That’s right, we’re getting eight different opening title sequences in one season. As exec producer Damon Lindelof explains, “Because we changed the title sequence between Seasons 1 and Seasons 2, we wanted to do something different [in Season 3]. So we said, ‘What if we treated the opening title sequence like an overture?’ There’s a way to thematically introduce the episode to come just by changing the title music every week.” Lindelof hopes the unique approach will discourage viewers from doing something he admits he does himself. “I love the title sequence for The Americans, but when I watch the show I fast-forward over it because it’s been the same for five years now. So we were like, ‘How do we stop people from fast-forwarding over our opening titles?'” 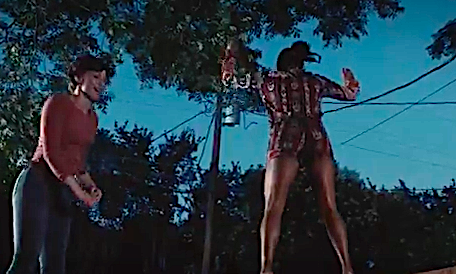 ♦ Carrie Coon and Regina King’s spirit-lifting turn on the trampoline in Sunday’s Leftovers was a lot less fun than it looked. “Regina hurt herself,” Coon tells me. “I popcorned her and she came down hard and twisted her ankle.” Ironically, going into the sequence it was Coon everyone was worried about. “I had ACL replacement surgery in January so everyone was being very careful with me,” she shares. “Everyone was so vigilant about my knee and then she ended up getting hurt.”
♦ One of the big streamers is circling a very limited revival of a beloved ’90s series.
♦ At Monday’s Emmy season-themed Bates Motel finale screening and and Q&A, I asked Freddie Highmore what he would’ve had engraved into [MAJOR SPOILER ALERT] Norman’s blank tombstone. The actor paused, smiled and responded, “Norman Bates: He was a nice guy.”

♦ If you, like me, are obsessing over Empire‘s unlikely pairing of Becky (Gabourey Sidibe) and Thirsty (Andre Royo), then you will be quite pleased to hear that showrunner Ilene Chaiken also “loves them more than life itself.” And you will see proof of her devotion to the duo in the Fox drama’s two-part season finale.
♦ Good news on the Bubble Series front: Per multiple sources, at least half of the shows featured here are very likely to return next season.