The Flash‘s Killer Frost is ready to go full villain, doffing the wispy lounge wear in which she escaped S.T.A.R. Labs to slip on fishnets, thigh-high boots and one very cool cape.

In her previous, Earth-Two incarnation, Killer Frost was clad in leather pants and a jacket, “so this is pretty different with the skirts and stuff,” Danielle Panabaker shared during our visit to the CW hit’s set, where the warm actress was almost (almost) jarring to lay eyes on, wearing her full costume (including a tiny extra flourish not spied in either of these exclusive photos).

Describing the ice queen’s “latest and greatest” look and how it came to be, Panabaker said, “This is our post-Flashpoint Caitlin Snow with powers, who’s become evil and turned into Killer Frost.” The actress, having “benefited from two-and-a-half years of watching other people have super suits,” helped shape the fierce new silhouette by considering practical and theatrical needs, as well as honoring the baddie’s comic book origins. 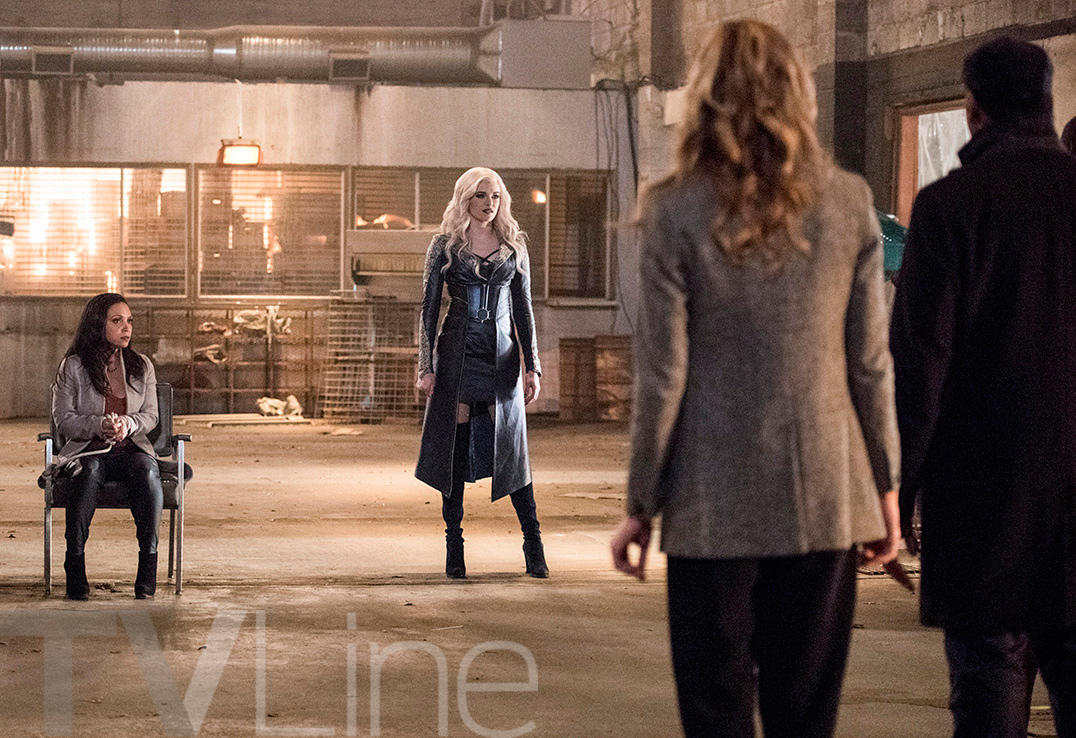 “In the research that I did about Killer Frost, she always wore boots, which was something that I was really pulling for,” she explained.

“And I know some of our producers really loved this long cape version [of the character], which is great and feels very villainous,” she added. “I love the sleeves on it because a lot of Killer Frost’s action is with her hands, and hopefully the light will really catch all the different details on that.”

Throw in a frosty wig and contact lenses that provide a stone-cold stare, and Panabaker is ready to pursue Killer Frost’s agenda, battling anyone who might stand in her way — Caitlin’s Team Flash pals included, as seen in the episode, “I Know Who You Are,” airing Tuesday, May 2. “It’s a real test of Killer Frost’s abilities, and her devotion — how badly she wants to be a part of the dark side as they all sort of duke it out,” previews her portrayer.

“Obviously, I was hired to play the very sweet scientist, but I’ve been super-excited about playing Killer Frost ever since I signed onto the show. It’s something that I really wanted,” Panabaker effuses. “It’s a great way for people to see that this cast is capable of pulling off multiple characters.”