Warning: The following contains spoilers for Sunday’s episode of The Walking Dead. (And trust us, this one’s so good, you’ll want to watch first, read later.)

In what may have been Season 8’s first truly great episode of The Walking Dead, Sunday’s “Some Guy” started with Ezekiel being shaken to his theatrical core by the massacre with which “Monsters” ended, and concluded with the king being shaken to whatever is even deeper than one’s core by the next tragedy to strike. What could possibly have been worse than the bulk of his battalion being gunned down? Grab a tissue and keep reading.

‘YOU TRUST THE KING — WE WILL WIN!’ | As the hour began, we flashed back to before the Kingdommers set off on last week’s fateful mission. With every shot — whether of families separating extra poignantly or Ezekiel taking a break from his speechifying to reassure young master Henry — it became more obvious that what had gone down hadn’t merely been bad, it had been horrific. And indeed, when we cut to the present, it appeared that every last one of the Kingdommers had been killed. Only, of course, they hadn’t all been killed. Soon enough, Ezekiel emerged from beneath a pile of his fallen subjects with just a leg injury — and pretty much immediately wished that he hadn’t emerged at all. (In fact, his reaction to discovering that cute ginger soldier Daniel was among the casualties was the same as mine: Nooo!) As the Kindgommers began to turn and lurch toward His Majesty, it looked for an instant as if his reign was over. Then, as will happen when a main character is in danger, to the rescue rode a lesser character — in this case, a Kingdommer named, I believe, Alvaro. Not that we’d really have to know his name for long…

‘YOU GOT ‘EM ALL KILLED, THEY’RE STILL FOLLOWING YOU’ | As quickly as Ezekiel was able to ask Alvaro if he’d seen Shiva — he hadn’t, not since the bullets had started flying — his lowercase-S savior was shot from behind. (R.I.P., fellow whose name was probably Alvaro.) And the shooter? Jeffrey freakin’ Dahmer! OK, it wasn’t really. But tell me that fellow wasn’t a dead ringer for the infamous cannibal (or at least an amazing approximation of what it would look like if Jim Carrey played him). Anyway, Dahmer — which is what I’m gonna call him since we never learned his name — intended to deliver Ezekiel to Negan to be chained to the Sanctuary’s fence next to Rick and “the widow,” Maggie. The king, as you’d hope, had other plans. He was perfectly willing to stay down when he fell and let the walkers make of him a fancy feast. “Better the dead be my end,” he spat, “than a despot’s meaningless foot soldier.” Alas, Dahmer forced him back up and — hello, foreshadowing as subtle as the scent of a rotting cadaver — taunted him by suggesting that, without Shiva, he had no story to sell to his subjects to inspire their undying (in some cases, undead) loyalty. 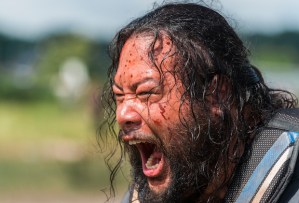 ‘THANK YOU, YOUR MAJESTY… FOR BEING SUCH A COOL DUDE’ | By and by, Dahmer got Ezekiel to the gate of the outpost. Discovering it chained — what were the odds, right? — the villain was forced to give up on his plan to deliver to Negan the whole king; instead, he’d just bring the head for prominent display on a pike. But again, as will happen when a main character is in danger, to the rescue rode a lesser character — in this case, our beloved Jerry, who cut Dahmer in half like he was a ripe melon. As the duo fought off the approaching walkers, Ezekiel, feeling the weight of his metaphorical crown, told Jerry that c’mon, he didn’t have to call him Your Majesty anymore. Jerry’s heart-tugging reply: “Dude, yes, I do.” (Seriously, I could scarcely heart Jerry more.) While all of this was going on, inside the outpost — which turned out to be Gavin’s, you know, the one with the stash of weapons — the Saviors who’d slaughtered the Kingdommers were packing up to hit the road. (Why they didn’t bother to take out anyone who was able to stand back up after their gun show, I have no idea. That’s bad-guy logic for ya.) Little did they suspect that Carol, both impervious to bullets and as stealthy as a shadow, had snuck in…

‘I AM READY TO BECOME WHAT I MUST’ | Making it look as easy as taking machine guns from a baby, Carol dispatched the first bunch of Saviors but soon found herself in the parking lot, trapped behind a pickup truck while their buddies played out their own version of the “Daddy would’ve gotten us Uzis” scene from Night of the Comet. Upon spotting a button to open the gate, beyond which waited a crowd of walkers who’d heard the gunshots as a dinner bell, Carol “surrendered” — but just long enough to grab a hostage and let in the zombies. Soon, it was Carol vs. a mere two Saviors — pretty sweet odds, considering her track record. But then she glimpsed Ezekiel and Jerry under attack just outside the gate and flashed us back to a discussion she’d had with the king pre-mission. During it, he’d recalled not only his decision to risk his neck way back when to help Shiva at the zoo — foreshadowing, you again? — but also Benjamin’s advice of what now seems like a lifetime ago: “If you’re asked to be the hero, be the hero.” Anyway, knowing that Ezekiel’s battle skills were primarily limited to stage combat, present-tense Carol had to do what should have been the job of a lesser character and ride to the rescue, in so doing allowing the Saviors to get away with the weapons. 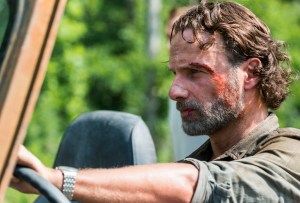 ‘LOOK AT WHAT’S IN FRONT OF US — THAT’S WHAT’S REAL!’ | Except that the Saviors didn’t really get away at all. As a matter of fact, they’d scarcely gotten out of the parking lot, it seemed, when Daryl and Rick were on them. Since the post-apocalyptic Butch and Sundance were as bullet-resistant as Carol, they soon managed to kill the Savior who was shooting at them from the back of a jeep. And the driver? He was nice enough to display the reflexes of a sloth so that Rick could pull up alongside him, position himself to leap into the jeep, make that leap and stab him. (You have to admit, that was pretty nice of him.) Meanwhile, Ezekiel pointlessly encouraged Carol and Jerry to leave him behind on the road, as he was only slowing down their safe return to the Kingdom. (I say “pointlessly” because, of course, they weren’t about to do that.) When the trio came under attack while traversing a ditch that was as gross as the Trainspotting toilet, Ezekiel tried to volunteer himself to stay and fight so that Carol and Jerry could escape. Again, Jerry was like, “No way — you’re my king!” At that, Ezekiel snapped. “I ain’t no king,” he said, feelings of fraudulence carved into his expression. “I’m just some guy.”

SPEECHLESS | Just then, Shiva leapt into the fray, sacrificing herself to protect her onetime rescuer. Now, I know a lot of you have hated the CGI tiger, but if that s— didn’t tear you up as badly as the walkers did Shiva, you might want to check your heart for a beat. Hell, I couldn’t even write this without getting all teary about it (and that’s more than I can say for the deaths of Eric, Richard, Benjamin, Jessie… ). At least Ezekiel didn’t let the tiger die in vain. He did eventually make his way back to the Kingdom with Carol and Jerry. But clearly, the loss of not only his four-legged friend but his battalion had left His Majesty changed. As a crowd of his subjects gathered around, hoping to hear from their leader the rousing sort of “… and yet I smile” speech to which they’d become accustomed, he remained silent, gently brushing past even Henry without a word. Brutal. So, what did you think of “Some Guy”? Wasn’t this a fine return to emotional form for the show? Hit the comments.