Though Sunday’s episode of The Walking Dead was the third in a row to feature almost non-stop smackdowns and shoot-’em-ups, battle fatigue and fatalities were beginning to be less of a concern than crises of conscience. In fact, the speed at which sides were forming (with Daryl, Morgan and Tara on Team Kill ’Em All, and Jesus, suddenly Rick and maybe Maggie on Team Live and Let Live) strongly suggested that, before the Saviors were vanquished, the allied forces would be fighting one another. Which characters wouldn’t still be around to see the conflict resolved? Read on…

‘I AM BINDING A HOPE TO MY HEART, PERHAPS UNWISELY’ | Picking up where “The Damned” left off, with the Saviors making tracks toward the Kingdommers, Ezekiel continued to wear a brave face. A brave, smiling face, to be exact. And at this point, he’d even gotten Carol to drink the Kool-Aid. Not only was she flashing an upside-down frown, she was telling the troops that, sure, the Saviors had the numbers, but the Kingdommers had something even better — strategy. Which sounded a lot like telling a puny football team dwarfed by their opponents that they could still win because they had spirit. Only, miraculously, the Kingdommers did emerge victorious — repeatedly — making true Ezekiel’s prediction that “we will lose not one of our ranks.” Not until the last minute of the episode, anyway. (More on that later.)

Meanwhile, at the Saviors’ compound, Rick and Morales were playing catch-up, as one will in a post-apocalyptic situation, at gunpoint. First, Morales had lost his family; then, his mind. But the Saviors had still picked him up, he explained. They’d dusted him off and turned him into the kind of villain who could say with a straight face stuff like “We’re gonna settle your s—, peaches.” And Rick could just drop the superior vibe. “We’re two a–holes who’ll do whatever we have to just to keep going,” Morales observed. “The only difference is… I’m the one holding the gun. That doesn’t make me any worse than you, Rick. It just makes me luckier.” For a hot second, at least. We weren’t even halfway into the hour when Daryl horrified Rick by putting an arrow in Morales’ head, adding that it “don’t matter, not one little bit” who he was. 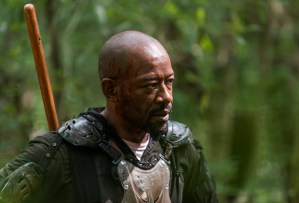 ‘I CAN BLEED HERE FINE ON MY OWN’ | Outside, Aaron was eager to get Eric to the Kingdom’s Urgent Care. Eric, however, insisted that his boyfriend was needed back at the courtyard kerfuffle. “You know I love you,” Eric said. And “you know I’m right.” So they shared a kiss goodbye that was way more poignant than we could have expected it to be, given how infrequently their relationship was a focal point, and off Aaron went… just in time to help bail out Rick and Daryl from an interminable hallway shootout. While all this was going on, Jesus was walking back to the Hilltop all of the Saviors who’d surrendered and reiterating to Morgan for what I’m sure will be but the 20th of a hundred times, “No matter what they’ve done, they’re people.” Jared, seemingly determined to prove Jesus wrong, seized every opportunity to bait Morgan, even going so far as to taunt him about wearing Benjamin’s armor.

Along the way, the group happened upon a rarely-discussed hazard of post-apocalyptic life: the zombie slide. Out of nowhere, down a hill tumbled a bunch of walkers, who, upon recovering their footing, took one look at the buffet spread out before them — the prisoners tied together for an even more luxurious dining experience! — and began to chow down. While Dillon encouraged his group to stay put and let the Hilltoppers dispatch the threat, Jared, as you’d expect, attempted to make a getaway with the Saviors to whom he was bound. When Morgan caught up with them, he was ready to execute the lot of ’em on the spot — and would have, had Jesus not intervened. Before you could say Morgan vs. Carol, Part 2, the men were walloping one another, with Jesus in the role that Morgan had played back in Season 6 and Morgan playing Carol’s part. Once the brawl was over and it was established that Jesus’ hair was still just-stepped-out-of-the-salon perfect, Morgan seemed to emerge, as if from a trance. “I’m not right. I know that,” he said. “I’m not right. But that doesn’t make me wrong.” Though Tara assured him that was right, Morgan’s mind was made up — he couldn’t “be a part of this.” 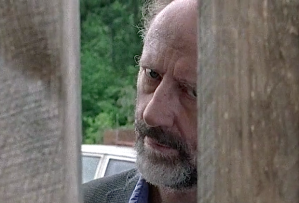 ‘I’VE BEEN THROUGH HELL!’ | Proving that he has nerve, if not guts, Gregory rolled up to the gates of the Hilltop — in Gabriel’s car, no less! — and tried to paint his cowardice as “heroic” to Maggie, whose inner eye roll had to have been so intense that even the baby felt it. Kal had told her what the weasel was planning to do in order to save his own worthless skin, Maggie said. No, no, that’s fake news, insisted Gregory, adding that Kal was delusional. (Kal, right on cue, up at his guard post: “What the hell?!?”) Still, Maggie allowed the Hilltop’s dethroned leader to come inside. “He’s not worth killing,” she told Enid. “Not yet, anyway.” Just then, Jesus showed up with the Saviors who’d surrendered. No way, no how are they coming in here, howled Gregory, as if he still had any say in the matter. “No offense, Jesus,” chimed in Tara, “but I kinda agree with that prick.” Once more, Jesus pled his case. “We can’t let them go, and we can’t kill them,” he told Glenn’s widow. “We can’t.” Did I mention that he was saying this to Glenn’s widow? ’Cause he was.

As the hour drew to a close, Aaron returned to the tree under which he’d propped Eric and discovered his gun and his blood but no actual Eric, dead or alive. Understandably, Aaron was horrified by the prospect of his lover wandering the woods as a walker. But he soon managed to distract himself by volunteering to escort baby Gracie to the Hilltop. After it seemed that everyone else had cleared out, Rick was about to, as Daryl put it, go “talk to them assholes” — Jadis & Co., perhaps? — when shots rang out. It was just the nerdy bit-player Savior to whom Mara had been so nasty in “The Damned.” Since Rick and Daryl hadn’t found the guns for which they’d been searching, Rick offered the guy a deal — and his word: If he told them where the weapons were, he could leave with a vehicle and a pulse. Immediately, the guy sang like a canary: The guns had been moved to Gavin’s outpost just a day ago. That intel procured, Daryl shot the guy in the head, and to hell with Rick’s word. Finally, Ezekiel was patting himself on the back for having gone through the entire episode without losing any Kingdommers when he was taught the hard way how easy it is to jinx oneself: A gunman started firing from a tower at the Saviors’ compound.

So, what did you think of “Monsters”? Putting yourself in the shoes of the characters — and having borne witness to the Saviors’ mercilessness — do you imagine you’d be more Team Kill ’Em All or more Team Live and Let Live?