Sunday’s episode of The Walking Dead was almost wall-to-wall action, with various groups of Rick’s allied forces continuing their assault on the Saviors. Yet the most exciting part of the hour didn’t come until the very end, when we were reintroduced to a character that few if any of us ever expected to see again — that is, if we remembered him in the first place. Who was it? Read on…

‘I’M FINE’ | Early on in “The Damned,” a Savior named Mara realized when no one would reply to her walkie-talkie call that she hadn’t suddenly become super unpopular, the enemy had arrived. “Lock the stairwell,” she ordered. “Every floor.” But it was too late. Quicker than Negan can make a pun, a group that included Aaron, Eric and Tobin — so, definitely B team — had the villains pinned in. Again too late, Mara realized that the attackers weren’t chicken to advance on the Saviors, they merely knew that they didn’t have to, because as soon as a few of the baddies who’d been shot died, they’d turn and take care of whoever was left. (Cue Mara getting bitten in 3, 2… ) Along the way, Tobin was winged and, later, possibly fatally shot. (Hard to say for sure, as it happened fast. At least if he died, he wouldn’t have to find out that Carol had moved on to flirting with King Ezekiel. More on that later… ) Eric also took a bullet to the gut, and although he still had a pulse at the end of the hour, betting money was on Aaron taking notice of Jesus’ silky locks by May Sweeps.

‘I DON’T DIE’ | Speaking of the post-apocalyptic TRESemmé model, he was on a team that included Morgan, Tara and Dianne. Once Morgan, who seemed to have decided he was indestructible, had risked his neck to quietly gain them access to the Saviors’ compound, they split into two groups. Morgan’s was made up primarily of extremely nervous Hilltoppers, who, once inside, lasted about as long as a birthday candle does on a cake. So he was left to move methodically through the stronghold, taking out any Savior who crossed his path. Meanwhile, Tara and Jesus happened upon a Savior who insisted he wasn’t, you know, “one of them.” Regardless, Tara wanted to drop him on the spot. But since he had wet his pants, purportedly from fear, Jesus bought his story… and wound up being held at gunpoint by the guy, who then admitted that it’s damn hard to wet one’s pants on purpose. “It’s like your d–k knows you’re wearing pants!” When the Best Actor nominee began to suspect that Tara was going to fire on him regardless of the risk to Jesus, he tried to distract her with another tall tale so that he could instead shoot her but was overpowered by his hostage. Still, Jesus wouldn’t put down the Savior! Rather, he knocked him out and tied him up, irritating the hell out of Tara, me and, I suspect, a whole lot of viewers. (Dude had threatened Maggie and the baby, for Pete’s sake!)

Upon receiving word that the Saviors were evacuating, Jesus & Co. moved outside to block them. When Jesus instructed the team not to fire unless they were fired on first, Dianne pointed out that if they were fired on first, hello? One of them would be dead. No matter, that was Jesus’ plan, and he was sticking to it, whether Diane, Tara or any of us liked it. Luckily for the lot of ’em, the Saviors that emerged surrendered. Given a choice between living and dying, the first of them, a twentysomething who I’m betting is the Dillon (Callan McAuliffe) that TVLine reported on back in April, said that “living sounds good to me.” He even encouraged his fellow Saviors to lower their weapons and not “be as dumb as they think we are.” Jesus had won this one, but Denise’s vengeful girlfriend wasn’t about to forget what the Saviors had done. So, even if Jesus was able to sway Maggie not to execute those who surrendered, Tara warned that she would sway Rick to do just the opposite. Just then, Morgan exited the compound, Rick’s words ringing in his ears (“We can’t leave them alive”), and was confused to see Jesus standing before those who had surrendered. Spotting Benjamin’s killer, Morgan moved to shoot him and was stopped by, basically, the new Morgan, Jesus. “It’s not what we do,” he said. “Then,” Morgan replied, “what do we do?” 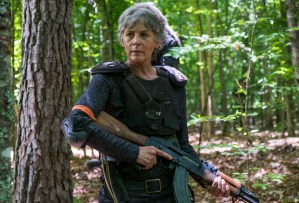 ‘THERE WILL BE NO FANTASIES OF FAILURE THIS DAY’ | Meanwhile, a third group — Carol, Ezekiel, Jerry and the Kingdommers — took off in pursuit of the Savior who’d tossed a grenade at them in the Season 8 premiere. If the guy made it to the outpost before they got there, their plans for a stealth attack would be thwarted. That won’t happen, insisted Ezekiel, adding with a flourish, “Trust the king.” Over the course of the hunt, he continued to confound Carol with his confidence in their “certain victory.” Finally, he posed a rhetorical question that sounded like it could have been Dr. Seuss meets Camelot: “Do I feel the supreme confidence, or is my lot, my job, to simply project such certainty? No and yes, yes and no, and then, finally, yes to both.” In other words, “Fake it till you make it, baby.” (Thankfully, he actually said that last part, reminding Carol and us that there is an actual person beneath all that regal posturing.) Eventually, the group not only located the guy, he was turned into Tender Vittles by Shiva, who showed up with reinforcements. Before the group could move on to the next step of their mission, they received word that the Saviors had been tipped off to their imminent arrival. No matter, said Ezekiel. They wouldn’t be retreating. (A whole lot of “Sense be damned, we’re doing what we’re doing” in this episode, eh?)

‘HI, RICK’ | The last group in “The Damned” was actually just a duo — Rick and Daryl, who, off Dwight’s intel (which, Rick noted, had proven thus far to be 100 percent accurate), were searching for the Saviors’ stash of weapons. At one point, they separated, allowing Daryl to happen upon what looked like the solitary-confinement room in which he’d been served dog-food sandwiches. (Somehow, he did not hear echoes of “Easy Street” in that moment, and I’m not sure whether I’m relieved or disappointed.) Nearby, Rick was attacked by a Savior who seemed so protective of a locked room that our hero was sure it was the one in which he’d find the guns. Only after he’d killed the guy did he learn that that wasn’t the case. Nor had the baddie’s “Grace Be God” tattoo been ironic. Behind the closed door was a nursery, in it a sleeping infant named Grace. (The infant didn’t announce that, of course; her name was painted helpfully on the wall.) While Rick was busy beating himself up for having killed the baby’s father, yet another Savior got the drop on him: Morales, who way back in Season 1 had been a part of Glenn and Andrea’s gang in Atlanta. A lot had changed since then, obviously. Morales radioed for backup, cocked the trigger of his pistol, and… we cut to black.

So, what did you think of “The Damned”? Are you psyched to see a character from the old days… or, since it’s just Morales, not so much? Also, is Jesus really going to replay Morgan’s thou-shalt-not-kill story?