No, I haven’t experienced missing time or slid sideways into a parallel universe: I’m aware that X-Files star Gillian Anderson has announced her plans to leave the sci-fi series at the end of the current season.

I’m also aware that series creator Chris Carter has floated the idea of continuing the iconic Fox drama without Anderson’s Scully, like how the series handled David Duchovny’s absence in Seasons 8 and 9 of the original run.

“I always thought of David the way I thought about the child William, as an absent center. Even when he wasn’t there, he was the center of everyone’s concern, and the stories revolved around him,” Carter recently said, envisioning a Season 12 where “Scully would be a similar absent center.”

Want a refresher on what happened the last time Scully was an “absent center?” Mulder shtupped a vampire wannabe and cried a lot. Conversely, when Mulder wasn’t around on the regular, Scully broke in new partners, gritted her teeth while an alien slug was cut out of her spinal column, carried a baby to term, delivered that baby with only whale sounds to kill the pain, witnessed the deaths of three of her closest friends and sacrificed her own happiness and fulfillment in order to secure the safety of her son. 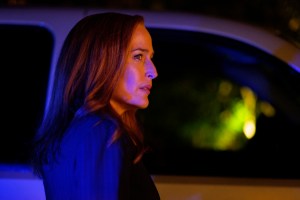 No X-Phile wants Mulder without Scully, or vice-versa, nor do we want to see the series go out with a little green whimper. But no one wants an alien pandemic to decimate the population and tie up traffic on the 14th Street Bridge, either — yet that’s on its way, too. And if I have to choose only one of the FBI’s Most Unwanted to carry the spooky banner forward, and if [cough up more money] Anderson’s mind can be changed [cough up more money] re: retiring the redhead, how about giving Scully a shot at leading the show?

I know, I know: Even suggesting such a thing risks turning one TVLine editor’s musings into a fan tirade. But this could be the perfect time to center The X-Files on Scully for a potential Season 12 (a renewal, remember, that is far from a given). What better time than now for a strong female with a history of relentlessness to come into her own?

I’m envisioning a super-short episode run — four to six tight episodes? — that allows Anderson the time she’s talked about wanting to pursue other projects. From William’s very conception, Scully has had more of a connection to her son than Mulder ever has: Why not have a reunited mom and kiddo — with an occasional assist from Skinner — work together to investigate the supernatural while also clearing up Scully-centric mysteries? (All of the “huh?” surrounding Maggie Scully’s death would be a good place to start.)

“The last time this happened, everything was terrible!” you shout, and you’re not wrong. But Scully’s entire storyline during Duchovny’s absence was about finding and/or grieving for Mulder. Wouldn’t it be nice to see her — and the habitually undervalued Anderson, who has since led a series — in the spotlight, on her own merit, for a change?

Plus: Scully’s immortal, remember? Storyline for seasons to come!

Agree? Disagree? Horrified? Enthusiastic? Hit the comments and weigh in!