Warning: This post contains spoilers for Episode 3 of The X-Files‘ revival.

If longtime X-Files fans felt all green and scaly warm and fuzzy after watching this week’s revival episode, they have executive producer Darin Morgan to thank.

Morgan wrote and directed the revival’s third episode, titled “Mulder & Scully Meet the Were-Monster,” and packed it with loving nods to episodes from the sci-fi drama’s original run.

The story seems simple at the outset: The FBI agents are called to Oregon to investigate some mysterious deaths, which happen to coincide with sightings of a man-sized, lizard-esque creature. But when Mulder gets to the bottom of the phenomenon, it turns out there is a big reptile running around… but he’s the victim of a human (played by Silicon Valley actor/huge X-‘Phile Kumail Nanjiani) whose bite turns the stymied “were-monster” into a human each day. 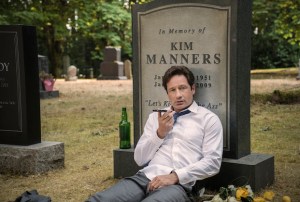 Rhys Darby (Flight of the Conchords) plays the baffled creature, who calls himself “Guy Mann” in a halfhearted attempt to pass as human. The hour tackles deep topics with a light, funny touch — a hallmark of Morgan’s scripts from the original series (such as “Humbug” and “Jose Chung’s From Outer Space“). And it rewards longtime fans’ loyalty with Easter Eggs both visual (the grave for deceased X-Files producer Kim Manners!) and verbal (the discussion of Scully’s immortality!).

Read on to hear Morgan and Darby give us some behind-the-scenes details on the episode… including how the production cajoled David Duchovny back into that red Speedo.

TVLINE | You’ve said the shoot for this episode was challenging. What was the toughest part?
MORGAN | Physically doing The X-Files requires a lot of nighttime shooting and a lot of location shooting, so you’re shooting in the middle of a forest at 3 or 4 in the morning consecutive nights, and it really exhausts you. Usually shooting in Vancouver, the problem is rain. We didn’t have any rain. They were having a heat wave, so the problem was mosquitos. [Laughs] So it was crazy. It was hot and mosquito-y, and then it’s middle of the night and you’re tired. So it’s just a physical challenge surviving the show. 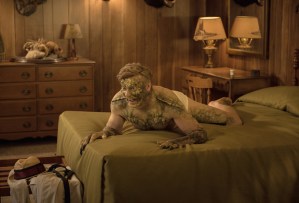 DARBY | I’m somewhat allergic to mosquitos. I’m one of these guys that they go for. I was naked for a lot of the time in the forest. As you can imagine, I took to dancing quite a bit just to keep my body moving. For some reason I thought my legs would be lesser targets to the mosquito squadron if I kept them dancing. 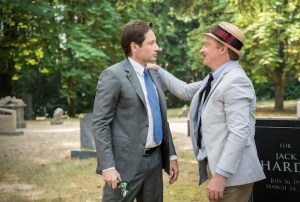 TVLINE | Darin, did you have Rhys in mind for the Guy Mann part from the beginning?
MORGAN | I didn’t have him in mind at all, but then after it’s good to go, I’ve got to cast someone. Who can play this part? And you realize no one can. So you start wracking your brain about who could pull off this kind of comedy. I’m a huge Flight of the Conchords fan, and… I always liked Rhys a lot, too. He gave the kind of humor where he’s a very smart character, but yet at the same time kind of oblivious or kind of in a befuddled state of what’s going on around him, which most people would play off as just being dumb.

TVLINE | Rhys, was it always you in the makeup? Or did you have a body double?
DARBY | I had a body double. There was another guy that was fully in the costume/ makeup… You see him a lot running around in the distance and things like that…. It was four hours to do me up, and that was just the top half of my body. So much detail, it’s amazing. Prosthetics. I’d never gone through that before. It was very creepy to see myself slowly dissolve into some creature while looking at the mirror.

TVLINE | The episode has so many Easter Eggs and little inside jokes for fans. Were there any that you wanted to include but couldn’t make happen?
MORGAN | One that didn’t get in was in the scene at the motel when Mulder is giving his big, long speech to her, and he’s sitting on the bed. [Scully] was supposed to be wearing an old New York Knicks T-shirt but we didn’t get legal clearance to do that.

The others ones that came in just came in organically. If they fit the story and there was a reference I could use, I did. It’s weird, because I’ve always written stand-alone episodes…. People now call them Monster of the Weeks. But you kind of have to address in some way the idea that you’re coming back after all this time, so I guess the way I decided was to have as many of these kind of references to the old show as I could, so people would feel like there was some continuity there or something. Just because it’s fun to do, I guess.

TVLINE | How did David Duchovny react to finding out he had to wear the red Speedo again?
MORGAN | Well, he did it. [Laughs] He didn’t voice his displeasure, but you could tell he wasn’t crazy about it. But I think instinctively he knew that it would get a very good reaction, that there was a very good reason to do it. He’ll do something if he knows it’s the right thing to do, I guess is what I’m saying.

TVLINE | Darin, you were in two X-Files episodes as an actor (Season 2’s “The Host” and Season 4’s “Small Potatoes”). Was there ever any though that you might pop up in this one, even if just in the background somewhere?
MORGAN | Oh, believe me, I tried to get the Flukeman popping up somewhere in this episode, and it just didn’t fit at all. You’d want to have the monster in this episode have a little fight scene with the Flukeman. That would have been great, but I didn’t have the time and we probably didn’t have the budget for that, either. If you have more than one monster in your episode, you break your budget. [Laughs] 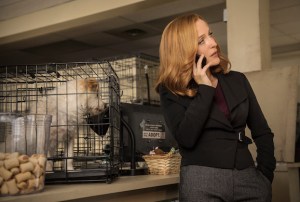 TVLINE | The Scully-is-immortal thing comes up again in this episode; series creator Chris Carter has said it’s true. But seeing as how the idea started in an episode that you wrote [“Clyde Bruckman’s Final Repose”], Darin, I think you’re probably the best person to address it. Was that ever your intention, or is that something that fans just absolutely went crazy with?
MORGAN |[Laughs] That was not my intention. That was something fans went crazy with — and they’re free to go as crazy as they want.

TVLINE | Rhys, Guy has his own moment with Scully via the retelling of their interaction in the cell-phone store. What was it like, shooting that scene with Gillian Anderson?
DARBY | All I could think about was how many fans would be salivating if they thought of the power that I had: I got to be a monster, I got to fight Mulder, and I got to rub up against Scully. [Laughs] All I could think was, “Wow, how many geeky boys would love to be in my shoes right now?”

What did you think of the episode? Hit the comments to let us know!