The X-Files‘ Dana Scully may not be immortal, but wouldn’t it have been nice if her mother were?

As many X-‘Philes guessed — and TVLine feared — Margaret Scully dies in the revival’s fourth hour, her death a painful tearing-away of Dana’s one constant: No matter what insanity Mulder was up to from week to week during the original run, Mama Scully always had a gripping hug and some nonsense-free advice for her only remaining daughter. She was the voice of reason when a delusional Dana pulled her gun in “Wetwired.” She was a bedside regular throughout her daughter’s cancer arc. And she tried mightily (and bodily) to protect her grandson, William, from those who wished him harm in “Provenance.”

Well, Maggie, if you had to die, at least you did it in a hell of an episode.

As much as I adored the high-energy fun of last week’s “Mulder & Scully Meet the Were-Monster,” “Home Again” more closely achieves what I really wanted from the revival: It cracks open these beloved characters, a little the rougher for wear since last we saw them, to show us new shades of Scully and Mulder. Better yet, it depicts us how their partnership — romantic, yes, but at the same time so much more than that — has evolved since the enigmatic doc took her first timid steps into the basement office all those years ago.

And the flashbacks/references to “One Breath”? BabyMulder? SupportiveMulder? A satisfyingly gross Monster of the Week? I die (but not, y’know, in the Scully-weeping-over-my-corpse way).

Let’s take a look at what happens in “Home Again.”

TRASHED | The week’s creature feature belongs to a putrid, smelly, lumbering figure who shows up in a garbage truck and literally rips annoying people apart with his bare hands, then disappears. Mulder and Scully are at the first crime scene — a Philadelphia Housing and Urban Development employee torn asunder in his own office — when she gets a call on her cell that she, at first, thinks is from William. But it’s really her brother Bill (remember him? I kinda wish he’d been there in person to sneer at Mulder for old times’ sake), and he’s got some terrible news: Their mom has had a heart attack. Bill is in Germany and their brother, Charlie, is estranged from the family, so Scully barely needs to hear Mulder’s “Go, go” before she’s on her way to the ICU in Washington, D.C. (Side note: Rewind and watch him watch her as she leaves. Trust me, you won’t be disappointed.)

After she goes, Mulder realizes that a giant, Banksy-style mural appeared on a wall outside the dead man’s workplace sometime after the killing. What he doesn’t know (but we do) is that the mural is of the creature that committed the murders.

YOUR WORK IS GARBAGE | Let’s wrap up the case quickly so we can get to all the angst, cool? There are more gory murders — mostly of nasty people involved in a HUD plan to move homeless people off the street so a luxury high-rise can be built — and Mulder and Scully eventually track the street artist down. He calls himself Trashman, and he’s pretty sure his indignation about how people treat the homeless like garbage caused one of his sculptures to come to life and go on a killing spree. When the being has finished off the mean homeless-haters, the murders stop.

And… that’s kinda it for that storyline, though what Scully takes from the experience will have ramifications for a while. (More on that in a moment.) 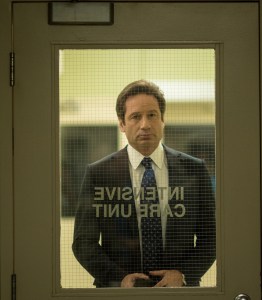 THE BEGINNING… | At the hospital, a nurse tells Scully that Margaret woke for a moment and asked for Charlie, but then lapsed back into unconsciousness. Scully’s confused: Her brother hasn’t spoken to anyone in the family for years. But she shakes it off and sits by Maggie’s bed, trying valiantly to pull her mom’s little rowboat back to the shore. “I’ve been where you are,” she says softly, listing the names of Maggie’s children and grandchildren as a reason to live. When she gets to “William,” Scully cries a little. “Don’t go home yet,” she begs. “I need you.”

Mulder shocks me by choosing not to travel to Peru or somewhere equally far flung in search of some storied sculpture-whisperer guru person or whatever but by doing the right thing by showing up at the hospital, shutting up and giving Scully someone to lean on. She’s having a really tough time: Maggie’s doctor informs Scully that her mom recently changed her living will and she wants no life-prolonging measures… including the breathing tube that’s likely currently keeping her going. When the medical staff extubates Maggie, Scully crumbles, Mulder physically holds her up, and I just love them both so much.

… OF THE END | But Maggie keeps breathing, so the pair pull chairs up to her bedside and wait for something amazing or heartbreaking to happen. When Scully remarks that she’s trying to will her mom back to life, Mulder simply says, “I invented it,” and that thunk you just felt was a Superstars of the Super Bowl VHS tape hitting you right in the heart. “You’re a dark wizard, Mulder,” she replies, amused. “What else is new?” he shoots back, and I love how Duchovny can’t say the line without laughing.

A call from Charlie rouses Maggie momentarily. She opens her eyes, takes Mulder’s hand, says, “My son is named William, too,”… then dies. Scully of course, is a mess, and once more I’m proud of Mulder for just holding her and letting her cry without spouting off about starlight or some other ridiculousness.

“Her last words were about our child, her grandchild that we gave away,” a bereft Scully says tearfully. “Why did she say that? Why did she have to say that?” But before she can use Mulder’s shirt as a hanky, she pulls herself together and demands that they throw themselves back into the case so she doesn’t have to think about what’s just happened. Aw, poor Scully. Bright side? At least you’re not insisting you’re “fine,” which I’ll view as progress.

BABY BLUES | Scully’s distraction plan backfires, though, when Trashman’s reflection on modern consumerism and waste reminds her of William. When the artist says that the creature is doing its own thing, she refuses to let him off the hook that easily. “You put it out of sight so it wouldn’t be your problem, but you’re just as bad as the people that you hate,” she says. Wait, guys, I THINK SHE’S TALKING ABOUT HERSELF. 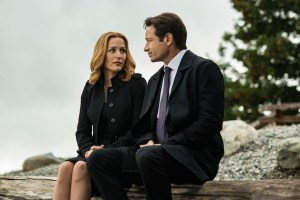 Later, Scully and Mulder sit with an urn of Maggie’s ashes and Scully reminds him that just like Maggie and Charlie, they’re responsible for their son William, even if they can never speak to him again. She’s still stymied by the quarter her mom was wearing on a necklace at the time of her heart attack, and she realizes that she’s probably never going to get all the answers she seeks. (Though that bit about being by Mulder’s side when he gets his answers? And when she calls him “Fox”? For the love of moose and squirrel, GIVE ME A MOMENT.)

Now it’s your turn. What did you think of the episode? Was the “dark wizard” line second only to Scully’s quip about running up stairs in 3-inch heels “back in the day” — and Mulder’s insistence that “back in the day is now?” Will you never hear “Downtown” the same way again? Sound off in the comments!