THE SHOW | The Assassination of Gianni Versace: American Crime Story

THE PERFORMANCE | Ryan Murphy’s TV shows offer actors a golden opportunity to spread their wings and show a side of themselves we haven’t yet seen. And in its second episode, Versace did just that for Criss, who shed his squeaky-clean Glee past to paint a vivid portrait of a murderer who’s just as charming as he is chilling.

As serial killer Andrew Cunanan, it’s disturbing how easily the lies spilled from Criss’ mouth, as Cunanan bragged about his connections to Versace and his upbringing in France, cold-bloodedly rehearsing his half of the conversation in a mirror beforehand in an attempt to sound “normal.” Criss concealed his Glee-trained pipes as Cunanan fled from authorities while singing (off-key) along with Laura Branigan’s “Gloria” on the car radio — a rare moment of pure elation for the troubled loner. This week’s centerpiece, though, was Cunanan’s riveting rendezvous with an elderly man who paid him for sex, wrapping the man’s entire head in duct tape and dancing to Phil Collins’ “Easy Lover” in his underwear while the man gasped for air. Criss’ intensely blank stare was positively unsettling as Cunanan reveled in the pain he was inflicting, like a shark smelling blood in the water.

Later, in a Miami gay club, Cunanan unspooled another set of lies to a fellow dancer who asked what he did for a living, manically rattling off a list of fake occupations before ending with, “I’m the person least likely to be forgotten.” Thanks to this week’s impressively versatile, chameleon-like performance, Criss’ revelatory work on Versace isn’t likely to be forgotten, either. 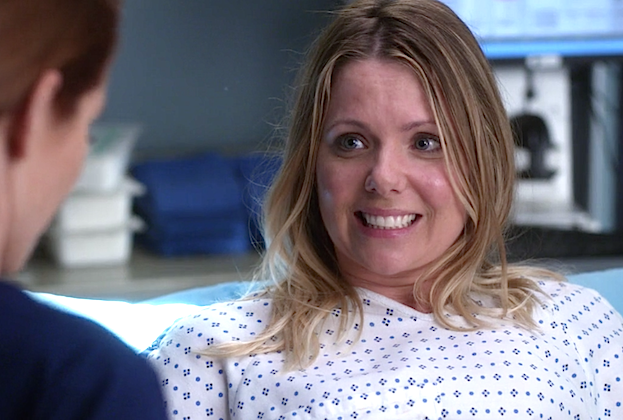 HONORABLE MENTION | No matter what, the death of Matthew’s wife shortly after she gave birth on Grey’s Anatomy was going to be sad. But what made it beyond sad was that Collette Wolfe more than let us know Karen, she made us love her. From the moment Karen was wheeled in to Grey Sloan, trying to joke through contractions, we wanted to spend more time with her. And she wasn’t merely funny, either; she was real. When she told Matthew’s ex April, “I don’t need to hear your side of the story,” she wasn’t being mean, she was just drawing a line. So big props to Wolfe for crafting a fully formed character from a handful of scenes. 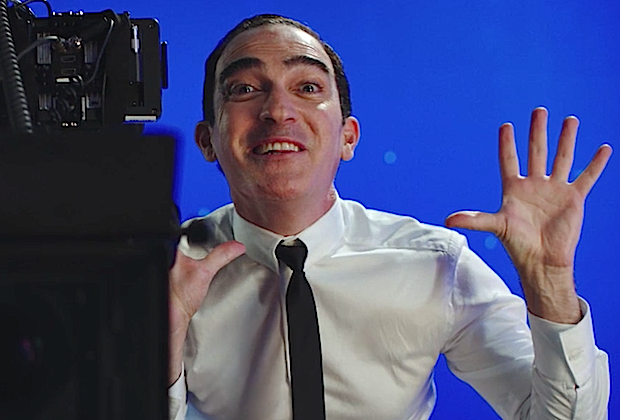 HONORABLE MENTION |  So bizarre, disturbing and uncomfortably funny was Happy!‘s Nick/Smoothie rematch that it might have permanently warped our brains. In spite of that — or is it because of that? — Patrick Fischler must be singled out for his performance, a tour de force just twisted enough to earn him a straitjacket as well as an Honorable Mention. By playing the sadist’s reunion with his archenemy with the barely-contained giddiness of someone setting out on a dream date they had spent eons anticipating, the actor made all the creepier the scenes’ one-two punch (the revelation of how Smoothie got his nickname and his subsequent, accessory-enabled rape of Nick). Thanks to Fischler, we now know for sure which way madness lies. 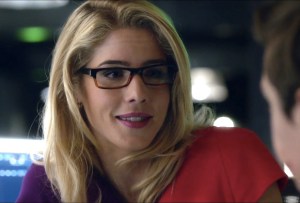 HONORABLE MENTION | Since her and Oliver’s impromptu wedding, Arrow hadn’t really given us Felicity as supportive wife/new stepmom, but Emily Bett Rickards made the wait very well worth it this week, as a crestfallen William needed parental guidance. As Felicity counseled Oliver, by pointing out that all she ever wanted from her (evil hacktivist) father was “the truth,” Rickards — with warm looks and her physicality — communicated the deepest connection ever between the newlyweds. And then there was her wonderful (and convincing) monologue, as Felicity and William eavesdropped on a Team Arrow op. “This is what [Oliver] does best — and nobody does it better,” Felicity explained. “So you can worry about your dad, but you have to believe that he’s going to be OK. Because that’s the only way this works.” And Felicity would know.