Although a lot went down in Happy!’s penultimate Season 1 episode, we’re here to discuss one scene in particular. You know the one, too — the one that Smoothie suggested the universe had conspired to make happen, the one that he felt was “destiny,” the one in which he got a long-awaited second chance to torture Nick (who’d escaped from the madman’s clutches in the Syfy series’ premiere).

“Clearly,” Smoothie told his captive audience, “you are a man who must be broken.” But, since pain and suffering are but “trifles to a man who would cheerfully die in agony,” in this instance, the psycho’s usual methods seemed “so… well, impotent.” 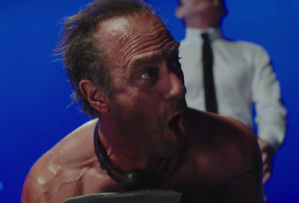 “We got here just in the… ” the imaginary unicorn started to say when McCarthy picked up the strap sans appendage. Wait, what? As Happy put it, “Oh, jellybeans!” — the thing had broken off inside Nick!

What did you think of Nick and Smoothie’s rematch? Did the show go too far? Did it ruin Spandau Ballet for you? Hit the comments.