As if to say “Season’s beatings!” Wednesday, Syfy drew back the blood-soaked curtain on Happy!, its pitch-black-yet-rainbow-colored comic-book adaptation starring Christopher Meloni as a jaded hitman thrust into an odd-couple partnership with the cheerful titular unicorn (voiced by Patton Oswalt) to track down a Santa who’s so scary, he makes the boogeyman look like the little drummer boy. But was the series’ premiere really as wild a ride as you may have heard? Could it possibly have been?!? Read on and find out… 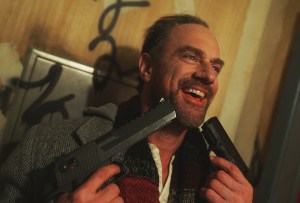 ‘HEY THERE, PRETTY’ | As “Saint Nick” began, we learned two things very quickly about Meloni’s Nick Sax. First, he could probably drink Patsy Stone under the table. And second, he has a death wish (manifested by a suicide fantasy so trippy, it’ll make you think you’ve overdosed on Jingle Jangle). Still, he was kickass at his job. Tasked with executing the brothers Scaramucci, underworld underlings of their despicable Uncle Blue (Ritchie Coster), he took out a hit on himself, thus luring them all to the same place at the same time. And, though it at first appeared that the goons had filled our antihero with lead while he was being serviced by a hooker he’d just saved from a murderous shrimp (don’t ask), he had, in fact, just lined them up to be taken down. The one variable that he hadn’t factored in was there being in attendance a fourth brother — Disco Mikey, who shot Nick (in the bulletproof vest) once before running out of ammo. If the hitman spared him, the JV mobster promised, he’d share with his would-be assassin what he’d just been given by the don on his deathbed — the password to a priceless encrypted file full of names. Nah, said Nick. If he had something that valuable, he’d just be tortured for it. Besides, he added, “I’m more of a cash-and-carry guy.” So he shot Disco Mikey, sending him flying backwards out a window.

When the hooker gasped that her rescuer had been shot, Nick replied, yeah, “but it’s the heart attack I just had that’s really got my attention.” While admitting that he oughta join a spin class and add some kale to his diet, he spotted Disco Mikey on the street below the window — dang it, he was still moving. When Nick went down to finish the job, the delirious, dying hoodlum made a last confession to his “mama,” whispering (we didn’t hear but can safely assume) the password in his killer’s ear. Then, while taking a swig from his flask, Nick collapsed right next to his victim. When the cops arrived, Detective Meredith McCarthy (Lili Mirojnick) was particularly interested to hear from the hooker that Disco Mikey had mentioned a password. (The hooker, on the other hand, was particularly interested in getting cleaned up. “Lady,” she pointed out, “I got every kind of thing that can come out of a guy all over me.”) Later, Meredith placed a call to Uncle Blue and revealed that Nick has the password the gangster wants. She smelled a rat — first the don, then four nephews croak… suspicious! — but Blue’s lips were zipped. He gave her the brushoff, then phoned the psychopath who’s apparently his favorite henchman, Smoothie (Patrick Fischler). 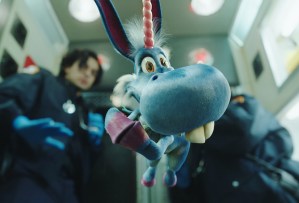 ‘WE GET WHAT WE GET AND WE DON’T GET UPSET’ | Meanwhile, young Hailey Hansen — in the estimation of her imaginary friend Happy, “the sweetest, most adorable little girl in the world” — slipped away from mom Amanda (Medina Senghore) at a Wishees show and got herself kidnapped by the creepiest Santa since Ian McShane visited American Horror Story. While St. Ick put her in a crate — extra creepily, but one of many in his lair — the unicorn took off, flying through the exceptionally mean streets in search of someone we’d soon learn was Nick. At that moment, the hitman was in an ambulance, making a couple of EMTs rethink their career choices by demanding morphine and nitroglycerine at gunpoint. When at last Happy found him, he — as you’d rather expect — didn’t make it easy for the lil’ guy. “I don’t talk to pink elephants,” barked Nick, who then passed out before hearing a word about Hailey and her dire predicament. Sorry, did I say dire? I meant exceedingly dire. At the police station, instead of getting a captain to speak to, her mom was handed a card for a grief counselor!

Later, when Nick awakened in a hospital room, he downplayed his condition to Meredith, saying, “I’ve had hangovers worse than this.” She couldn’t believe the pathetic excuse for a man she was looking at had once been a great detective — her hero, in fact. After suggesting that his wife had been smart to get out when she did, Meredith told Nick what he must have already known, that he was in deep s— since Disco Mikey had given him that all-important password. She figured it had been Blue who’d contracted Nick to kill the three stooges; the villain just hadn’t expected Disco Mikey to wander into the wrong hit at the wrong time. So the way she saw it, Nick’s only shot at emerging from the looming underworld civil war with a pulse was to give the password to her. In response, he… wouldn’t even cop to knowing the password, much less give it up. Upon her exit, Happy was finally able to tell Nick that Hailey needed help. Unfortunately, at that moment, so did Nick, as the unicorn warned him that Smoothie and “some real creepazoids” were on their way to his room. Nick armed himself with a fire extinguisher but passed out before the baddies had even crossed the threshold. In other words — Happy’s — uh-oh. 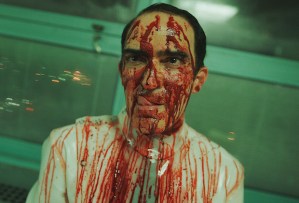 ‘MY LIFE IS AN EVER-SWIRLING TOILET THAT JUST WON’T FLUSH’ | When Nick woke up strapped to a table in Smoothie’s nightmarish O.R., the sadist gleefully informed him that he should stop talking to his imaginary sidekick. “Drug-induced dementia,” he said, “is a luxury that you will no longer get to enjoy.” Nick being Nick, he wasn’t shaking in his boots. Rather, he taunted Smoothie by revealing that he was preceded by his reputation — for partaking in golden showers. Then, he agreed to give his abductor the password. Which was? “Tinkle tinkle,” he cracked. In response, Smoothie declared that “I am going to remove your penis, in thin slices, like salami, just for starters.” Still unfazed, Nick joked, “That’s gonna take you a long time, if you know what I mean.” Thankfully, instead of actually allowing his johnson to be turned into mansticks, Nick broke free of his restraints and, in the most violent battle this side of AMC’s Preacher, knocked out the mad doctor’s henchmen. “Can we go back to saving Hailey?” asked Happy. Not quite yet. Nick had one last henchman’s head to bash in. Spotting Smoothie watching, Nick even made a show of it, mock-peeing on the hooligan with a fire extinguisher (clearly, his weapon of choice).

“I can explain,” Nick deadpanned when the cops burst in. But, since they remarked that Blue wanted him alive, he couldn’t allow himself to be taken into custody. As he and Happy tried to find their way out of the hospital, the unicorn observed, “We’re in a family-size jar of pickles, Nick.” When at last the unlikely duo did make it to the exit — and borrowed Meredith’s car for their getaway — Nick informed his traveling companion that they were getting the hell outta Dodge. But they couldn’t, Happy said. He would’ve told Nick sooner, but he was afraid since he’d left once before, he might get scared away again. What was the unicorn talking about? “Hailey is your daughter!” (Dunno why I didn’t see that coming!) As if that news hadn’t hit Nick like a ton of bricks, their vehicle was then struck by an oncoming truck! So, what did you think of Happy!? Grade the premiere in the poll below, then hit the comments.