If your idea of Christmas cheer is a drunk hit man coughing up blood in a dive-bar bathroom to the sounds of “Jingle Bells”… well, Syfy has a holiday treat for you. 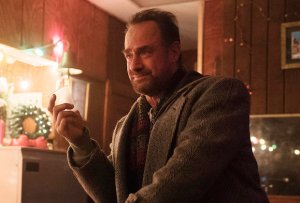 To be clear, the network’s wild new graphic-novel adaptation Happy! — debuting this Wednesday at 10/9c — is most definitely not for everyone. It’s an adrenaline-charged roller coaster of sex, drugs and graphic violence, with a wickedly cynical sense of humor to boot. It’s relentlessly in-your-face, and the faint of heart (or of stomach) need not apply. But it’s also one hell of a ride, with gleefully over-the-top action sequences… and the end result might just be Syfy’s most exciting original series since Battlestar Galactica.

Christopher Meloni, of Law & Order: SVU fame, stars as the aforementioned blood-cougher-upper: Nick Sax, a drug-addled former cop-turned-killer for hire with a nagging death wish. (He daydreams of blowing his brains out, then merrily disco-dancing while blood spurts out of his skull like an erupting volcano.) Nick lives in a colorfully macabre urban hellscape populated by corrupt cops who smoke in hospitals, prostitutes drenched in blood and a cheerfully sadistic torturer named Smoothie (Lost alum Patrick Fischler). And our antihero is perfectly happy murdering people for money and drinking himself to death… until a tiny blue horse with wings named Happy enters his life. 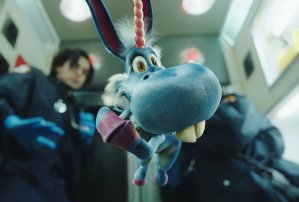 Yes, Happy! gets even stranger when a little girl gets kidnapped by a demented, crack-smoking Santa Claus, and her imaginary friend Happy (voiced by Patton Oswalt) finds Nick and begs him to help rescue her. Nick, of course, thinks Happy is just another alcohol-induced hallucination, but the persistent bugger just won’t go away, and eventually finds a soft spot in the old Grinch’s withered heart. Along the way, Nick has to kick some serious ass, and Happy!‘s gonzo fight scenes are a definite highlight — a twisted, ultra-violent mash-up of old kung-fu movies and Looney Tunes cartoons.

It’s a great role for Meloni, who exudes a Bruce Willis-esque cocky cool as Nick. His grizzled misanthropy leads to some fantastic one-liners — “My life is an ever-swirling toilet that just won’t flush” — and Meloni handles the demanding fight scenes with convincing vigor. (Although Nick’s superhuman fighting skills and healing powers are never adequately explained. Is he a mutant, or what?) Fischler makes a great creep as the coldblooded Smoothie, who threatens to cut off Nick’s manhood “in thin slices, like salami.” It’s all heightened to a surreal, silly extreme, with quick cuts and tilted camera angles that feel like they’re lifted straight from the panels of a comic book — which, in a way, they are.

Happy! has all the makings of a beloved cult hit… but like all cult hits, its appeal does have limits. The action in the pilot is so breathlessly high-octane, it’s borderline exhausting. The pitch-black humor and dystopian funk veer dangerously close to ugliness at times. And outside of Smoothie, Nick’s antagonists are too thinly drawn to make an impression. (Meredith — a compromised cop who has a past with Nick, played by Lili Mirojnick — is particularly flat.)

But despite those flaws, I can see those who love Happy! going absolutely nuts for it. It’s undeniably different — and after years of forgettable offerings, it’s nice to see Syfy serve up something that stands out, for better or worse. If the sight of blood makes you go pale? Happy! will not make you happy. But if you like your TV dramas gory, action-packed and ruthlessly funny? Meet your new favorite show.

THE TVLINE BOTTOM LINE: Syfy swings for the fences with the ultra-violent, pitch-black Happy!, and Christopher Meloni’s roguish charms help sell it.