Wednesday’s American Crime Story returned us to the summer of 1997 — La Bouche was topping the charts, body glitter was all the rage and a wide-eyed Andrew Cunanan was arriving in Miami Beach ready to make a name for himself.

And by “make a name,” I mean the bespectacled serial killer conjured yet another alias to secure a room at Miami’s Normandy Plaza, where he came upon a tragic soul named Ronnie (played by New Girl‘s Max Greenfield). I would say he befriended Ronnie, but that would imply Andrew was capable of forming a genuine connection with another human being — and I’d sooner believe that Will Chase grew out his own mustache for this show. (Side note: Anyone with behind-the-scenes intel on Chase’s ‘stache should feel free to drop a comment on the matter below.) 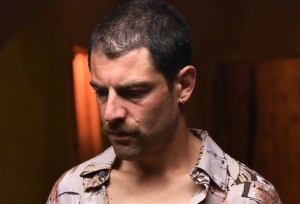 Money wasn’t an issue for the duo, as Andrew’s side business — which mostly involved seducing married men, wrapping their heads in duct tape, then eating room-service lobster — was simply flourishing. You know, if you look past all the lies and drugs and face-stabbing, these two actually had a nice little arrangement. And Ronnie really cared about Andrew; he even had aspirations of opening a flower kiosk together. It was very “Somewhere That’s Green.”

Sadly, Ronnie’s dream was not meant to be. After wrapping his own head in duct tape (there was a lot of that this week) and taking a long shower, Andrew walked out of Ronnie’s apartment — and his life — for good. Even worse, when Ronnie questioned if Andrew considered him a friend, Andrew chillingly replied, “When someone asks if we’re friends, you’ll say no.”

That line, of course, was a reference to the final scene of the pilot when the police knocked down Ronnie’s door looking for Andrew at his last known address. And speaking of the authorities, this episode really showed how little interest the police — and even the FBI — had in pursuing a string of gay-related crimes, even one as twisted as Andrew’s killing spree.

Wednesday’s episode also took us back to 1994, the year Versace was allegedly diagnosed with HIV. (Though Versace’s family denies his illness, Maureen Orth’s biography — upon which this season of American Crime Story is based — claims the fashion icon was HIV-positive at the time of his murder.)

And the fallout from the diagnosis brought out Donatella’s true feelings about Antonio, whom she blamed for her brother’s infection. “He wasn’t enough for you,” she said. “You wanted more. More fun, more men.” She also chastised him for not finding a way to give her brother a family, which she claimed Antonio knew he always wanted. “If you had given him anything, I would have given you respect,” she said. “But you gave him nothing.”

Versace later clashed with his sister, who expressed concerns about newer designers stealing attention — and business — away from the company. (He also argued that the Versace models were too skinny, but that’s a whole other fight.) Determined to prove her wrong, and to prove that he wasn’t going to let his recent diagnosis slow him down, he pulled off a crowd-pleasing runway surprise, temporarily zipping Donatella’s lips. (No small feat, as you can imagine.)

Your thoughts on Versace‘s second chapter? Drop ’em in a comment below.