Warning: This post contains a massive spoiler for this week’s This Is Us.

Not all kitchen appliances are created — or maintained — equal, This Is Us creator Dan Fogelman would like to remind everyone in the wake of Tuesday’s devastating episode.

Taking a moment to remind everyone that it was a 20 year old fictional crockpot with an already funky switch? Let's not just lump all those lovely hardworking crockpots together. #ThisIsUs

He’s referring to the episode’s big revelation: The fire that destroyed the Pearson family home (and likely killed Jack) was started by a faulty slow cooker secondhand-gifted to Jack and Rebecca by a neighbor years before. And because the downstairs smoke detector battery hadn’t been replaced, the family didn’t become aware of the blaze until flames had already spread through much of the home. (We’ll find out precisely what happened to the Pearson patriarch in the post-Super Bowl episode slated for Sunday, Feb. 4.)

The company cheekily addressed the episode on Facebook — even though the kitchen gadget portrayed in the hour is technically labeled “Slow Cooker” and not actually the brand name “Crock-Pot” —  Wednesday afternoon. In a few posts, the brand sympathized with “heartbroken” Jack afficionados and pointed to the idea that the cookers are safe, in part because they have been “generationally tested by your family and friends” 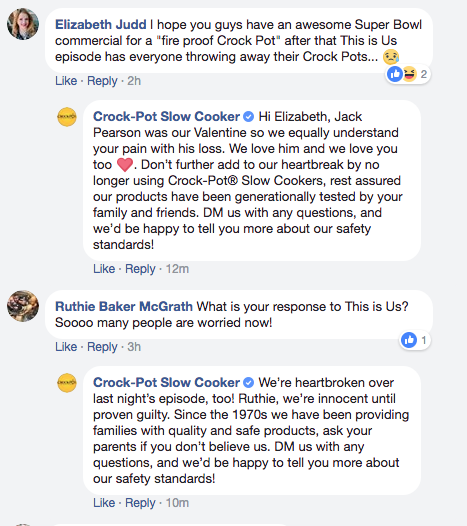 UPDATE: Late Wednesday, a Crock-Pot spokesperson got back to TVLine with the following statement:

Crock-Pot understands the concerns brought up by last night’s episode of This Is Us, and we too are heartbroken by the latest development in Jack’s storyline. However, it is important that our consumers understand and have confidence that all Crock-Pot slow cookers exceed all internal testing protocols and all applicable industry safety standards and regulations as verified by independent third-party testing labs. For nearly 50 years, with over 100 million Crock-Pots sold, we have never received any consumer complaints similar to the fictional events portrayed in last night’s episode. In fact, the safety and design of our product renders this type of event nearly impossible.

In addition, and most relevant to the concerns consumers are having after watching the recent This Is Us episode, our Crock-Pot slow cookers are low current, low wattage (typically no more than 200 or 300 watts) appliances with self-regulating, heating elements. The product is designed to cook foods over a longer period of time at low temperatures and the switches connect to only 1 side of the power line voltage, so there is never a high voltage applied directly across our switches. The switches within our slow cookers are subjected to additional internal testing, which includes a Rotary Knob Endurance test, Rotary Knob Force Test and Flame Burning Test and constructed of self-extinguishing, flame resistant material.

Our hope is that the team at NBC’s This Is Us will help us spread factual information regarding our product’s safety. While we know their primary mission is to entertain – something they have continued to excel in – we also feel they have a responsibility to inform. Just like many fans, we will be watching next week’s episode to see how Jack’s story progresses and, regardless of the outcome, we want consumers first and foremost to know they are safe when using their Crock-Pot.

Anyway, thanks for nothin’, George. 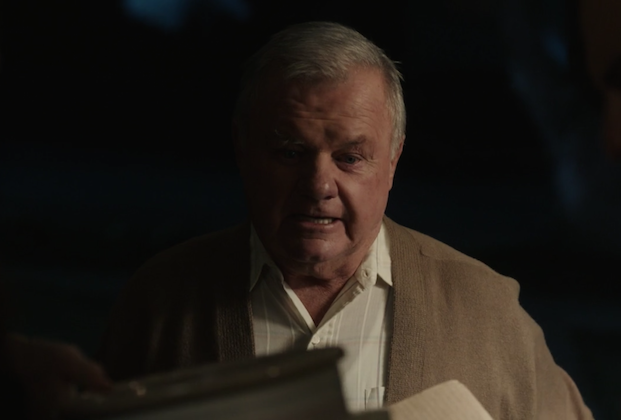