The Saddest Sack in Music City award this week goes to Nashville‘s Will Lexington, who manages to have an embarrassing goodbye with his ex, a failed hook-up with a gymbro and an uncomfortable revelation to Gunnar all in the space of an hour. Oh, and did I mention he’s shooting steroids into that perfect swivel machine he calls his hips?

Yep, even though he pastes on a toothpaste-commercial-caliber grin and maintains he’s only injecting a little human growth hormone, it’s clear that Will is hurting something awful in the wake of his break-up with Zach. Yes, it seems like it happened 10 years ago. Yes, Zach was never all that impressive to begin with. But pain is pain, people. And now that Gunnar has gotten a glimpse of his roommate’s true anguish, what’s he going to do about it?

Read on for the highlights of “Jump Then Fall.”

GOIN’ BACK TO CALI | Zach informs Deacon that he’s going to leave Nashville, but he’ll still be a major partner in Highway 65. “I’ve decided to pursue a Senate bid in California,” the tech whiz says, and Deke wishes him well. Will tries to do the same a few days later, stopping by the label as Zach is packing his office, but Perfect Mark is there, and things get awkward fast. Zach tries to go the “Welp, I wish you well!” route, but the pleading note in Will’s lovelorn voice make that just about impossible. “Why couldn’t we make it work?” Will asks, all but begging. When Zach admits that he couldn’t get past Will’s refusal to back him up during the Highway 65 tense time, there’s not much else to say.

So Will hits the gym, hard, and gets some admiring glances from an onlooker. Or maybe the guy is just concerned, because Will is making dying elk sounds as he bench-presses a massive amount of weight. No, it’s definitely admiration: All it takes is a brief hello, and pretty soon Will has taken the guy home and is kissing him with abandon in the foyer. That’s where Gunnar finds them — that moment made me laugh out loud — and there’s a round of stilted introductions (in which Will gets the guy’s name wrong) before Gunnar leaves and Will and gymbro wind up in bed. Will is athletically going at his appointed task when the guy asks him what’s wrong; turns out, Will’s Little Lexington doesn’t seem to want to stand up and cheer.

At the doctor, Will can’t even bring himself to whisper the word “erection,” but his physician is all business as she tells him his problem is likely psychological and connected to the breakup. Still, she runs some bloodwork and is concerned to see a lot of junk in Will’s blood that shouldn’t be there. He admits that he’s been using some human growth hormone and steroids in order to get an edge in the gym, and she urges him to follow a protocol that will help his biochemistry even out. And that night, he’s about to take her advice and toss the vials he’s keeping in the bathroom… but then he thinks twice and prepares to inject himself, instead. That’s when Gunnar walks in, and though Will admits he’s using HGH and then plays the moment off as no big deal, it’s clear that Gunnar (correctly) thinks something is really wrong. 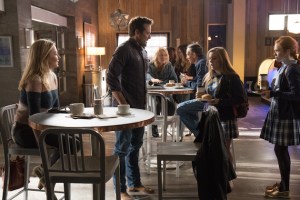 ONE STEP FORWARD, TWO STEPS BACK | After their date and kiss in the previous episode, Deacon and Jessie are gingerly stepping up to the idea of being a couple. But they agree they should probably keep it from their kids for a while… until Daphne sees them at a café and everyone knows everything. So Deke gets weird, and then he apologizes but Jessie gets weird, and they finally agree that they want to be together after he goes to her house and tells her than her hanging up the phone on him made him feel “like the floor fell out from under me.” They smooch, unaware that at home, Daphne is having a sobbing breakdown in her sister’s arms. While both girls acknowledge that they want Deacon to be happy, “I hate this, and I hate her,” Daphne says. “Now I just really feel like mom’s gone.” (Side note: Great work here — and in the ballad she performs after — by Maisy Stella.) 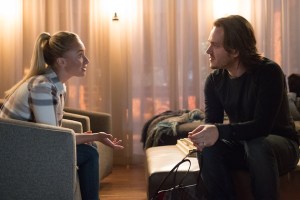 WATER RISING | Juliette genuinely seems to be doing better, and if only she weren’t quoting Darius’ hackneyed platitudes every five minutes, Avery might be able to relax and be happy about his wife’s progress. (Sample dialogue, which gets a well-deserved eyeroll from Avery: “I want us to connect more as a family, not just see each other. That’s why there’s so many problems in this world: We interact, but we never really communicate on a deeper level.”) But he’s worried about her rapid assimilation into the Movement for Coherent Philosophy, and he admits as much to her. So she proposes a visit, in order for Avery to meet the man in charge and see everything she’s been so excited about for the past few weeks. A wary Avery agrees.

At the center, Avery asks Darius to explain coherent philosophy, and while a lot of words stream from the guru’s mouth, none of them really mean much. “I don’t know what it is. That’s the problem,” Avery tells Ju in the car on the way home. “He’s one guy who created a philosophy and now it’s like he’s controlling everything you think.” She’s not happy with how the day went, saying that the people in the movement “accept me exactly where I am and when I’m with them, I feel like maybe I can accept myself, too.”

And after Juliette comes home late from another evening with Darius & Co., Avery brings up the weird vibes he’s getting from Ju’s new bestie. “You’re putting all of your trust into this guy. You’re spending all of your time there. You’re living your whole life by his words,” he says. Juliette counters that maybe he’s jealous of Darius, or sad because Juliette’s not leaning on him the way she used to. And the next morning, she’s not angry as she heads out for another workday with the group, but she’s also not really listening to what Avery’s saying. 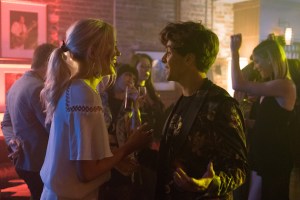 BIEBER? I BARELY KNOW ‘ER! | Jonah’s wooing of Maddie continues. He invites her to a club, where he asks her to sing on a track he’s recording the next day. That goes well, and they are quite canoodly as they hang out with his friends that evening… until a paparazzi photo of them fleeing the studio appears on a TMZ-like site, and Jonah gets angry. He explains that he just wants to get to know her without the interference that goes along with him being a huge pop star, and she is very level-headed as she tells him she doesn’t think she’s his girlfriend or anything that serious. And when people online start talking smack about her not being good enough for him, Mads decides to end things before they begin. She won’t let Jonah kiss her, saying that she knows the Internet is a harsh mistress, and she wants to avoid that kind of exposure if at all possible. But Jonah won’t let up, so he finds a place where they can get to know each other without flashbulbs going off: an old folks’ bingo game, where they appear to have a great time.