After the events of Tuesday’s This Is Us, there won’t be a stocking for Deja on the Pearson family mantle this Christmas. We always knew this could happen — the very nature of the foster system wants it to happen, reuniting kids with their parents — but the teen’s departure certainly is a sad turn of events for Randall, Beth and the girls. However, as we see toward the end of the fall finale, it might also be a ray of hope for a child we’re on the cusp of meeting.

But before we get to a rundown of “Number Three,” let’s talk for a second about how the last three episodes before the winter break shook out, shall we? Of the trio, “Number Three” (which focused on Randall) and “Number Two” (Kate’s hour) have in common a renewed sense of hope in the wake of a big loss. You leave these installments feeling like things are going to be OK, like Rebecca and Jack’s kids are using the lessons their parents taught them to forge ahead on the unpredictable, often heartbreaking path of being an adult and a parent.

And then there’s Kevin.

The eldest Pearson sibling is no better off — in fact, he’s considerably worse — at the end of the fall finale than he was at the start of “Number One.” He’s drunk. He’s in despair. And now he’s detained for a DUI issued while one of nieces is in the backseat. I really thought Kevin might pull out of his tailspin by the end of the three-episode arc, and now I’m going to spend the entire hiatus worrying that his day of reckoning might still be several painful incidents away.

And on that cheery note, let’s review the hour. 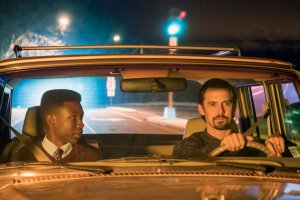 AMONG FRIENDS | Let’s tackle the flashback first: Because we’re focused on Randall, we tag along as he and Jack visit Howard University in Washington, D.C. The minute they get to the historically black college’s campus, Randall is so happy. He opts for a private tour with his hometown friend, Keith, who’s a current Howard student, which leaves an out-of-place Jack to do his own thing during the day. Keith introduces Randall to some of his friends, and they discuss how it’s weird but kinda awesome to go from their high schools, where almost everyone is white, to Howard, where almost no one is. Teen Randall is relaxed in a way we haven’t seen often, and it’s sweet.

“I really like it there, Dad,” he tells Jack on the drive home. Jack is happy to hear it, but he brings up how at the start of the day, Randall hesitated before introducing him as his father. Randall explains that it’s not because he’s embarrassed, but then he points out that what Jack’s feeling is familiar territory for the teen. “I feel like that all the time, not from you guys but with everybody else. Been like that since I was little,” he says, explaining it as “just off-balance. Like everything’s going to be a little bit more complicated for me.”

Jack is moved, and he brings his son to the Vietnam Veterans Memorial Wall in D.C. After Jack touches the wall, eyes wet, he and Randall sit nearby while Jack recalls how he got drafted at 25 and felt similarly off-balance when he returned home from the war. “Even your mom, she doesn’t know what I really did, what I really saw. It’s just too hard for all of us that were over there,” he says. “You’re going to find your balance, Randall, and then you’re going to lose it, and then you’re going to find it again. That’s the ride.”

Unfortunately, Jack’s loving reassurances that Randall is going to make spectacular choices “because you are spectacular, son,” (aww) are interrupted by the page from Kate about Kevin’s football injury.

SHAUNA’S SURPRISE | In the present, Randall is in his element: preparing for Thanksgiving and dad-joking all over the house. “Why did the iPad go to the dentist?” he asks Tess and Annie, who start rolling their eyes even before he drops the punchline: “It had Bluetooth.” Upstairs, Deja is practicing her presentation on photosynthesis, the culmination of a project she’s been working on with Randall. When she says that the kids in her class will mock her for putting in so much effort, he reminds her that “working hard is what gets you the big house and the fancy car.” She teases him for being corny, but she’s glowing under the light of his help and attention. (Side note: Think about the difference between Deja’s first episode and now. Lyric Ross has proven herself quite the actress in this arc, no?)

But the warm moment between the teen and her foster dad is interrupted by a commotion outside: Deja’s mother, Shauna, is on the front steps, arguing with Beth. The charges against Shauna have been dropped, and she’s come to take her daughter home. When Beth and Randall object, Shauna gets louder and angrier, to the point that the neighbors notice. But the only thing that calms her is when Deja comes downstairs. “You know it doesn’t work like this,” the girl says, calmly. “We’ve got to do it through the social worker.” Eventually, Shauna leaves. 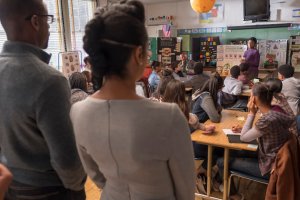 FIGHTING WORDS | When Linda comes the next day, Randall and Beth are shocked to hear that the social worker is going to recommend that Shauna get full custody of her daughter. “I need to remind you both that this is exactly what you signed up for,” Linda says, wearily, as the Pearsons rail against what they perceive as injustice. And when they say that they’re going to meet with their lawyer to see about pressing charges (trespassing, threatening) against Shauna, Linda maintains that they’re making a mistake.

After dropping the kids at school — and promising Deja that he’ll be there to see her presentation that afternoon — Randall drives by Shauna’s place. She just happens to be standing out front, showing a friend some clothes she’s purchased for her daughter, and that takes a little heat out of Randall’s ire. Then he flashes back to a chat he had with William just after the Thanksgiving blow-up/cabin ‘shroom trip last year, when William reveals that he actually followed Rebecca back to the Pearsons’ home after she abruptly ended their second meeting. And he almost walked up to the door and introduced himself, envisioning a lifetime in which he could be a welcome guest at Randall’s big events — birthdays, holidays, graduations and the like. But then he saw The Big Three’s bikes, which bore novelty license plates reading “Number 1,” “Number 2” and “Number 3,” lying on the front yard. “A nickname I dind’t know from a life I had nothing to do with,” William sadly recalls. “Just like that, I realized it was over. Who was I to insert myself into your life against your mother’s wishes? Who was I?”

FAREWELL, DEJA | And with that sentiment reverberating through his mind, Randall meets Beth at Deja’s school and says, “I don’t think we can keep Deja from her mother.” After a few minutes, and some Randall rambling about how Pac-Man is like Sisyphus, Beth sadly concurs. “I’m going to miss her,” she says. “Me, too,” he replies. 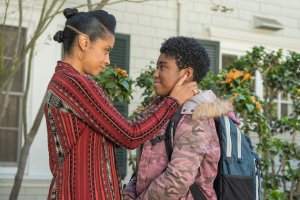 Randall even gets a shout-out during Deja’s presentation, which makes the parting all the tougher when Shauna returns to the house later that day. As Randall and Deja say their goodbyes, he tries to keep it light — HIM: “Who’s gonna call me out when I’m being corny?” HER: “Beth will.” “HIM: That’s true.” — but she makes sure she knows exactly how she feels. “Just because I want to go home doesn’t mean I don’t like living with you,” she says softly. And while I applaud Randall’s ability to pretty much keep it together even though he’s 100 percent on the verge of a sob, when Deja tells him he can hug her, he loses the fight. They embrace, and he’s openly crying as she gets in the car and leaves.

UNCLE KEVIN DOES A BAD THING | After that, things happen quickly. Kevin calls and says he’s on his way over. Rebecca calls and tells Randall about Kate’s miscarriage. Then Kev shows up, as red-eyed as ever, and wastes no time pouring himself a screwdriver. Kev begs off calling Kate, saying he’ll do so when he’s more together, then ghosts after saying a quick hello to Tess and Annie.

But what Kevin doesn’t realize as he’s drunk-driving down the road is that Tess has stowed away in the back of her uncle’s car in a bid to spend more time with him. And when he’s pulled over for reckless driving, he’s arrested. The cops call Beth and Randall, who are beyond mad, and it’s not looking great for Uncle Kev at ALL.

But let’s end on a happier note: Earlier, as Beth changes the linens in Deja’s old room, she and Randall decide that they’re definitely going to keep fostering kids, “even if it means losing them all over again.” Randall goes on to muse that “there’s another kid out there who needs us… maybe a boy this time.” And in an office somewhere, we see a woman reassure a little boy that “we are working very hard to find you a home.” Is this the Pearson’s next family addition?

Now I turn it over to you: What did you think of “Number Three?” Hit the comments!