Of all the Pearson kids, Randall is the absolute last person you’d expect to ingest some hallucinogenic fungus and spend the hour talking to his dead dad.

And yet, here we are.

This week’s episode of the NBC drama finds Randall and his siblings taking a last visit to their mom’s rustic cabin before it goes on the market. Nothing has changed since the World’s Most Awkward Thanksgiving Dinner, when Randall confronted his adoptive mother and biological father about keeping their acquaintanceship from him: Randall is so angry, he’s preparing a presentation about his fury just so he doesn’t miss any salient bits when he eventually does speak to Rebecca.

When someone is nearly PowerPointing their resentment toward you? Yeah, you’re in trouble.

In other news, Olivia is terrible again. Or is she? Signs point to maybe not, but I only have enough emotional bandwith to handle one Pearson family member’s crisis per week. (Sorry, Kev.)

Read on for the highlights of “The Trip.”

CABIN GRIEVER | Beth and William find Randall pacing and making a detailed list of reasons he’s angry with his mom. “Did my father know about you?” he demands of his biodad, and William replies that he “never got that impression.”

In fact, as we see via flashback, Jack had no idea that William was alive and/or interested in his son’s life. After Randall’s interest in random black people he encounters becomes evident, Jack makes a case for hiring a private investigator to find their son’s birth parents. But Rebecca definitively shuts him down at every turn, and Jack goes along with it. After all, “He knows everything we do,” he tells his wife, whose tamped-down guilt is palpable.

Downstairs at Randall’s house, Kevin breaks the news that Rebecca is planning to sell the cabin where the trio spent a lot of time during their youth. Still inspired by her plane drama — which Kev downplays as “turbulence” — Kate suddenly demands that she and her brothers “seize the day!” and take an impromptu trip out to the old house. “The cabin is our childhood,” she argues, and the guys eventually get on board.

I SPY, WITH MY MAGIC EYE | The cabin is like a time capsule to the 1980s and ’90s, with its dogeared board games and framed Magic Eye print (which Kevin, naturally, can’t see). But when Kate and Kev try to reminisce by flipping through a family photo book, all Randall can see is deceit. “Look at this. Right there? That’s mom lying to me about not being able to find my birth father,” Randall says, and I promise, it comes out funnier than it seems here.

Not long after the Pearsons’ arrival, Olivia shows up with Sloane, playwright of Kevin and Olivia’s upcoming production, and some man-bun named Asher. Turns out, Kev invited his maybe-kinda girlfriend, and she brought them. Kate is not a fan. “This guy is wearing suspenders over a thermal. What is that?” she says, and Kevin makes the whole thing worse by referring to the dude as “authentic.”

Don’t worry, things get worse. Olivia dated Man Bun and is still snuggly with him. Guys, let’s not judge the actress too harshly. Maybe there’s a reason… Wait, what? Olivia’s throwing some shade at the epic game of strategy and courage known as Girl Talk? SOMEBODY HOLD MY EARRINGS.

Kate totally feels me on this, but before she can really say anything, Man Bun wanders into the room and wonders who drank half of his smoothie… which contained psychedelic mushrooms. Um, where’s Randall?

HAVE A NICE TRIP! | As it turns out, he’s outside, tripping and having a conversation with 1980s-era Jack, who he hallucinates is cleaning out the house’s broken gutter. And once the others ascertain that Randall is a) breathing and b) not in possession of his car keys, they leave him alone. Because that’s a totally responsible thing to do: Give your emotionally vulnerable and pharmaceutically impaired brother some me-time in the woods. After all, nothing (bears) bad (snakes) can (forest fires) happen (ravines) in (murderous lunatics) the (more bears) woods!

Randall spouts his ire to ShroomJack, who is understanding… to a point. “We gave you everything we could,” he tells his son. “And all I was supposed to feel was grateful,” Randall shoots back. “I was a replacement for your dead baby. That’s all I’ve ever been.” But ShroomJack knows how to go for the heartstrings just like his real-life counterpart did. “The moment I saw you, I knew you were my boy,” he says, placing one hand on the back of Randall’s neck and pulling him close. “You weren’t a choice, Randall. You are a fact.”

On the whole, having Randall accidentally trip is a too-easy way to get some Jack/Adult Randall scenes. And we’ve essentially seen that exchange — in which Jack assures Randall that he is, in every way, his son — in Episode 6. So why am I crying, again?

OLIVIA O-LEAVES | Inside the cabin, Kate confronts Olivia about being a jerk. But Olivia turns it into a confrontation about how Kate and the rest of the family is holding Kevin back. And then she deploys an accurate, yet devastating, truth bomb: “You’re scared that you’ll lose all the weight” and nothing will change, Olivia tells a shocked Kate. Then the actress walks away, saying that Kate doesn’t know anyone like her. (How are we interpreting that, This Is Users? Was Olivia large earlier in her life? Her discussion of the fear behind Kate’s decision to lose weight seemed a little first-person-ish, no? Or was that just a reference to Olivia’s scary feelings about Kevin? Log your theories in the comments.)

Kate calls Toby to vent her frustration, but he has one question: “Are we stil broken up?” When she replies in the affirmative, he says he’s gotta go. “I can’t be this person for you anymore, Kate. I’m sorry. Goodbye.”

Kevin finally has his fill of Olivia’s antics when she’s all canoodly with Man Bun on the couch while Kev’s sitting directly across from them. He then accuses her of being afraid of having a real relationship with him. He also calls her “an empty, human shell,” which causes her and Man Bun to get up and leave… stranding Sloane, the playwright, who rented the car in the first place. (Don’t worry, Sloane. Kevin will show you the full Manny later, which has gotta take the edge off.) 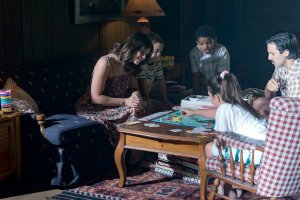 YULE BE SORRY | In more flashbacks, we see Rebecca visit a five-years-sober William and tell him about Randall. William wants to meet his kid, but he gets a little too excited about it and Rebecca bolts. (Side note: Randall’s totally going to unearth that Poems for My Son manuscript after William’s death, isn’t he?) She later sends him the letter and photo Randall found at William’s apartment on Thanksgiving.

But ShroomJack points out that everything Rebecca ever did was in service of her family’s safety. And we watch Rebecca confide in Jack that she’s worried that Randall’s birth family might try to take him away; after all, they never legally relinquished their rights to their son, they just left him at a fire station.

The hour’s most affecting scene, in my opinion, happens in flashback when Jack and Rebecca attend Randall’s first karate lesson at a dojo run by a black man. They found the place based on a recommendation from Yvette, the mom from the pool who has become a family friend; she thinks Randall needs some black, male role models in his life. The sensei holds a ceremony to welcome young Pearson into the class. It involves Jack doing a ton of push-ups with Randall on his back while the sensei talks about how Jack would do anything for his kid, but that we all need help making our way in the world. So when Jack eventually tires, Randall gets on the back of every other father in the room — all of whom are black — and they do the push-ups Jack is too exhausted to do. Sounds corny, but plays so beautifully.

Later, when the drugs wear off, Randall’s anger has calmed a tad — enough for him to visit Rebecca and say, “You kept that secret for 36 years. That must’ve been incredibly lonely.” She instantly begins to sob. Thinking this is the start of a reconciliation, she reaches for him, but he pulls back. “No, not yet,” he says flatly. “I’ll see you at Christmas.” Then he walks away. Oof.