“What if?” is a harsh mistress, but that doesn’t stop several This Is Us characters from sleeping with her this week, anyway.

Randall wonders if he was meant to be a musician, but that pesky getting-adopted thing just got in the way. Kate ponders the possibility that her new boss only hired her as an elaborate scheme to communicate with her overweight teenager. Kevin, the king of doubt, rings his “Maybe I’m Just Not Good Enough” bell so hard, it takes a funeral (a stranger’s) and a breakdown (Kevin’s) to dampen the clanging. And in the past, Jack envisions a life in which his anachronistically sculpted dad bod is out there building homes for his own company instead of stuck under fluorescent lights in a cubicle all day.

How do all these what if?s affect the Pearson family’s general happiness, in both the past and present? Read on for the highlights of “Career Days.”

THE SAME, BUT DIFFERENT | In the past, Jack comes home from the desk job he took to make a little more money for the family, and the kids all yip for his attention. But it’s Rebecca who actually nabs it when she shows him Randall’s totally average report card and note from his school, which wants a meeting ASAP.

Turns out, Randall’s test scores are through the roof, and the discrepancy with his grades is likely because he’s bored. A school administrator suggests a private school where he’ll be more challenged, but Jack immediately balks on the grounds that the school is even whiter than the public one he’s in now — and at the new place, he won’t have Kevin and Kate there to look out for him.

JACK WISES UP | But Yvette, the mom from the pool a few episode ago, who is now a friend of the family, points out that Jack is treating Randall differently because he’s black; after all, he wouldn’t think twice about sending a white kid to the very white private school if that kid were exceptionally bright. So when Jack spends a little alone time with Randall at the office and witnesses his son’s mathematical genius firsthand, he questions why the boy doesn’t want to own up to his smarts. “I don’t want to be different from them,” Randall says in tears… and he’s referring to his brother and sister.

Jack then gives a very touching monologue about how, even though he and Rebecca have tried to treat all the kids equally, they’re not the same — and that’s a good thing. “I love you as much as the human heart can, kiddo. You are an exceptional young man,” he says, and they hug. No, YOU’RE moved by a mustachioed dad’s tender words to his child!

So Randall starts attending the new school, and Jack puts aside his dreams of opening his own homebuilding company (Big Three Homes, awww) and instead takes a promotion Miguel offers. 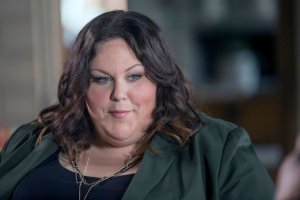 KATE DON’T PLAY THAT | Kate gets a job as an event planner/personal assistant for a woman named Marin (oh hi, Jami Gertz!), but soon realizes that the woman partly hired her because she thinks Kate can somehow get through to her overweight daughter, Gemma. It doesn’t really work. And after Kate kicks the insolent girl out of her car while chauffeuring her to a friend’s house, it looks like maybe that’s the end of this gig (at which, by the way, Kate excels).

But Marin apologizes, and Kate stays — though she dumps the personal assistant duties. On her way out of the house, Kate lets Gemma know that she, too, has a gorgeous and thin mom with whom she’s compared herself her entire life “and now we barely talk and it sucks.” Using herself as a cautionary tale, Kate advises the brat to cut her mom a break.

LETTING IT ALL OUT | In rehearsals in New York, Kevin is having a really hard time mustering up the appropriate amount of sadness for the play’s emotional climax. So Olivia tricks him into attending a stranger’s memorial service with her.

Kevin is irked by the ruse (as well he should be; when Olivia lies to the widow about how they knew her husband, I hate her a little), but eventually he finds himself sharing a moment with the dead man’s wife in her kitchen. They go from talking about the deceased’s love of pickles (some of which Kevin eats) to The Manny sobbing on her shoulder after he tells her that he destroyed all the models he made with his dad and how the necklace he wears is “all I have now. I can’t take it off now.” (Side note: I love Kevin’s vague “It was a long time ago” when the grieving Grace asks when Jack died. Nice try, lady! Go back to theorizing on Twitter like the rest of us!)

When Olivia finds him later in a bedroom, he’s angry that she crashed the sad occasion. In turn, she’s happy that he’s finally getting in touch with some long walled-off feelings. “Why do you push that all away?” she asks, and apparently she likes his answer, given the way she takes swift advantage of his lips like they’re a Bed, Bath & Beyond 20 percent off coupon on the last day of eligibility. “Sorry I have picklemouth,” he mumbles as they roll onto the coat-covered bed. Ha!

But slow your emotional roll, Kev: At the next rehearsal, Olivia tells him that they’re done, and he should use those emotions to fuel his dramatic work. And, scene!

SING IT PROUD | Oh Randall. I want to be on board with your choice to sing a song at your daughter’s Career Day, but honey… you don’t play the piano. Or have any discernible musical talent. And your sense seems to be in short supply this week, as well. But here are the things I do love about Randall’s storyline this week: his description of what a “weather trader” does (“It’s like licking a piece of pizza so that nobody will eat it later!”); Beth’s advice to “look away” when he drops his boring Career Day speech in favor of a cringe-worthy ballad, sung entirely in his head voice; the way he jumps at both William’s approval and offer to teach him piano; his decision to instead take piano lessons from someone else, because his fledgling relationship with his biodad doesn’t need the complication of a student/teacher dynamic; and the way he and Beth tease and taunt each other in the most loving of ways (though I love that every week).

The best moment is when proud math geek Randall announces to his family at breakfast, “My dad put on a tie every day because he had to. I put one on every day because I want to.” Randall, c’mere. I wanna give you and your little midlife crisis a big hug!