The good news: This Is Us‘ Jack spends part of the modern-day storyline in this week’s episode watching the Steelers game with his daughter.

The bad news: He does so as a pile of ashes in a nondescript urn. Yep, it’s as we feared — Milo Ventimiglia’s character is, indeed, dead. (Though it doesn’t stop him from wearing his team’s colors, which is dedication in the extreme.)

While everyone undoubtedly will focus on getting an answer to the query the series posed at its outset — where’s Grandpa Jack? —  a shift with equally far-reaching consequences happens quietly at the end of the hour. As Randall sobs and packs up boxes in William’s bedroom, we realize that he’s doing so because his biological father is no longer among the living, either. That means This Is Us has executed an unforeseen, “We have to go back!,” Lost-style flashforward, brief though it may be.

While I’m sure this opens up the drama’s storytelling capabilities (if it’s used more than once — I haven’t seen any episodes past this week’s), it also allows Dan Fogelman & Co. to make us sad about stuff that hasn’t even happened yet. And because getting upset about events that may never come to pass is my specialty, this brings me perverse joy. It’s like my anxiety just got a straight-to-series order!

Read on for the highlights of “The Game Plan.”

STEELER YOURSELF | After a way-back flashback to Rebecca’s childhood, we learn that Rebecca has a fear of becoming her mother: i.e. a football widow who doesn’t understand the sport and can’t connect with her husband about it. So while she’s on a date with Jack (at least, I assume it’s during their courtship), she asks him to teach her all about the sport.

Next thing you know, Rebecca is a grid-iron enthusiast hurling insults at the television and speaking with authority about defensive plays and the like. And on the Sunday of Super Bowl XIV — aka in January of 1980 — she’s pumped because she gets to sing a bit at a local bar called Froggy’s before the game gets going. Miguel and his wife are supposed to meet them for the festivities, but are delayed because of some unpleasantness involving their kids and a stomach bug. “Why do people have kids?” Rebecca wonders, that morning. “No idea,” Jack replies, and they do a shot in bed, shaking their heads. 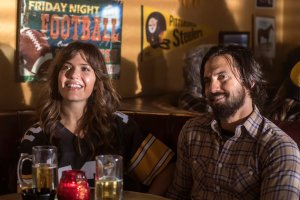 AN ORIGIN STORY | The thing is, though, Jack really wants kids. And as the day goes on, he confronts his wife about it at the bar. Shouting happens. A punch is thrown (when an overhearing lame-o gets into it with Jack). And Rebecca storms away to sit outside in the cold while the team she loves achieves glory in the season’s crowning game.

That’s where Jack finds her later as happy game-viewers amble out of the bar. “If it’s between you and having kids, you win. Every time. No question,” he tells her, waxing affectionate about how he wants to watch football games with his kids like he did with his father (albeit a lot more lovingly). And she responds with a really understandable, “I love our life. I love it right now. And I’m so scared of changing it.” He gets it. They kiss. And then, having made up, they go have sex in the Froggy’s bathroom, which is a) when Kate, Kevin and their unfortunate sibling are conceived and b) not the story I would’ve shared with my kids, but to each their own.

MEET THE PARENT | Toby doesn’t understand why Kate wants to watch the Steelers game by herself, and she doesn’t do a great job of explaining. So he keeps at her until she agrees to watch at his place… only he invites his friend, and they insist on talking over and (gasp!) pausing the game, which makes her so irate that she takes off. When he comes to her place later, she apologizes, saying that she used to watch the games with Jack all the time until she moved out to Los Angeles. And when Toby says he’d like to meet her pop, that’s when we learn that Jack has been sitting on Kate and Kevin’s mantel this whole time.

So Kate and Toby end up watching the game with Jack, whom they place on the coffee table and on whom they plant a Steelers knit cap. I guess grief manifests itself in myriad ways, right?

FALSE ALARM | When Kevin complains about the loneliness of his posh New York City hotel suite, Randall and Beth happily pipe up and say they’ll spend the night there. So while Kev and William babysit, the couple zip into the city for a romantic overnight and some “loud, adult, no-kids-in-the-next-room sex,” which Randall excitedly previews as he explores the rented rooms. But Beth has some troubling news: “I’m late.” As in, she feels terrible and almost threw up while looking at pizza. As in, she’s maybe pregnant but too freaked out to take a test to see.

So the pair go to the drugstore, where they’re both clearly spinning at the idea of adding another child to their family. He had been thinking about early retirement in Charleston. She had been preparing to go back to work full-time. But by the time they’re sitting on the bathroom floor, waiting for the test to give them some news, they’ve come around to the idea of sibling for Annie and Tess. “A son wouldn’t totally suck,” he says. “We do make cute kids,” she adds. But then the stick says “Not pregnant,” and the relief on their faces is realistic perfection. 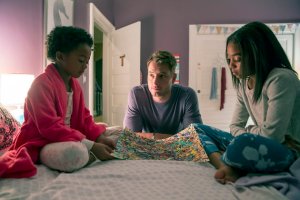 ‘THERE’S JUST US’ | Meanwhile, back at the house, Kevin is more concerned with getting off-book for the play than with being the “celebrity judge” at the girls’ doll pageant. So he ropes them and William — whom Kev says has the voice of “the owl in a Pixar movie, no offense” (heh) — into running lines with him. But this endeavor quickly devolves into the girls asking if William is going to die… and Kev trying to make it better by pointing out that everyone, including Randall and Beth, will die someday… and then the girls are heading off to bed scared out of their minds that everyone they care about will be gone and there’s nothing they can do to stop it. (Same, kids. Same.)

When he and William are alone, Kevin laments his doofishness. “You do that a lot… doubt yourself,” William points out, adding that “you were very good, Kevin, on that show.” Bolstered by the gentle support/real talk, Kevin goes up to show the girls a painting. Apparently, whenever he takes on a new gig, he paints the way it makes him feel. (Side note: Curious — so was The Manny painting just one big dollar sign, or lots of little ones?) He shows them the art he made for the play, explaining that all the disparate parts and colors turn into one big thing, and how that thing represents all of us, interacting and loving and living and dying. “What if we’re in the painting before we’re born? What if we’re in it after we die?” he muses, as flashbacks to his childhood — as well as the aforementioned, heartbreaking flashforward — unspools on screen.

“There’s no you or me or them. There’s just us,” Kevin goes on, and man, is Justin Hartley killing it here. Also: Who knew Kevin was a closet Buddhist?