When the family air conditioner breaks this week during This Is Us‘ flashback storyline, Jack innocently suggests that the family head to the public pool for a little relief from the heat.

Meanwhile, I suggest that Rebecca check the cooler to make sure Jack is sticking to his promise not to drink. Because I have to believe that no one in his or her right, sober mind would think that a day-long trip to a community swimming hole with three kids is a good — much less relaxing — idea.

And it’s not like the kids have an easy time at the suburban oasis, either. Kate runs into weight haters. Randall finds himself torn between his family and his desire to connect with other black kids. And Kevin… well, we maybe start to get an indication of why he grew up and went into acting, perhaps the most “look at me!” profession there is.

Read on for the highlights of “The Pool.”

CARE BEAR DESPAIR | The troubles start when Kate, who’s so proud of the Care Bear bikini she’s rocking, sees some friends and makes a big show of waving to them. They act like she’s one of the really gross Garbage Pail Kids; later, they pass her a note that reads, “We don’t want to play with you anymore. You embarrass us.” And there’s a drawing of a pig face on it, too, just in case Kate’s spirit hadn’t completely died from the words.

Kate eventually shows the note to her folks. Jack is ready to run across the pool deck and show the mean girls the full power of Mad Dad ‘Stache, but Rebecca stops him, saying it’s their fault “because we didn’t make her wear a tee shirt.” (Side note: Rebecca’s well-intentioned yet damaging comments about/around her kids may be the end of me.)

So Jack contents himself with lending Kate his ridiculous green frog T-shirt, telling her it has magical powers (he was wearing it the night he met Rebecca) and that she’s a princess in his eyes no matter what.

AWKWARD | Meanwhile, when Randall disappears, Rebecca panics until she finds him playing with some black kids. “Oh, we know who you are,” one of the moms says with a big smile when Rebecca introduces herself. “When a white family has a black child and they don’t introduce themselves to any of us, we tend to take notice.” Ouch.

Rebecca drags Randall back to the family’s spot, but later heads back over to try again, asking if Randall and her son can play sometime soon. The woman softens a bit, gives Rebecca a tip on how to keep her son’s skin from turning ashy after he gets out of the pool, and a tiny spark of friendship is lit. (We know, thanks to a framed photo at Randall’s house later in the episode, that the woman becomes a good friend of the family’s.)

Meanwhile, Kevin nearly drowns in the pool while his parents’ backs are turned. And he throws a fit over it later, calling out how he doesn’t get as much attention as his sister and brother because he doesn’t have overt issues. I mean, the kid’s not wrong…

EX MACHINA | In the present, Kate and Toby are having lunch when Toby runs into his ex-wife, Josie. She’s thin and pretty, and Kate does a quick scan of the woman’s white skinny jeans and 4-inch heels and is instantly obsessed. “I told you I was married before,” he says. “Not to that,” she shoots back.

So Kate cyber-stalks Josie, even going as far as walking into her shop. When Josie assumes Kate is there for a job, Kate doesn’t disavow her of the idea, and pretty soon…

“So the good news is, I got a job,” Kate says as she arrives at Toby’s place later. He’s ripped that she can’t focus on anything other than the fact that Josie is not fat; even worse, Kate seems to value Josie’s opinion of her more than she does Toby’s. “She was terrible to me, Kate,” he confesses, adding that Josie cheated on him, lied to him and took half his life savings. The aftermath of their marriage was ugly, and he was suicidal. “I gained 95 lbs in one year after she left me.”

Long story short? “You haven’t cornered the market on problems, Kate,” he says, and though he’s clearly not happy with her, he makes it clear that he’s not going anywhere, either. She apologizes, and they make up. 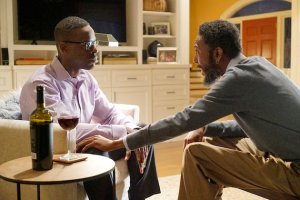 A NEW UNDERSTANDING | William tells his granddaughters a story about his involvement helping fight anti-bussing protests in the late ’80s, then he goes for a walk in the neighborhood… where he’s promptly stopped and hassled by the neighborhood security guy for Walking While Black (and Unfamiliar).

Randall apologizes to the guard — to his rankled father’s surprise — then takes him shopping for new clothes. While they’re at the shop, the men process the event, with Randall summing it up: “Because I grew up in a white house, you think I don’t live in a black man’s world.” He makes a point of telling his dad that he swallows a lot of injustice and microagression “so I’m not pissed off all the time” — and he’s been doing it his whole life.

Later, after watching Tessa play Snow White in her school play, Randall reveals that he’s stuck on the idea that William was clean in the 1980s but didn’t come to look for him. “Three weeks I’ve known you, and I haven’t said the words,” William says, looking so sad. “I’m sorry. I am so deeply sorry. I did everything wrong by you, and you’ve done everything right. You are doing everything right, son.” Really nice work there from both Sterling K. Brown and Ron Cephas Jones, right down to the way they laugh the same after the heavy moment eases a bit.

BABY SAYS WHAAAAAT? | Kevin arrives in New York, ready to take the theater scene by storm. But he acts ignorant at best, offensive at worst during his first audition. (When he calls someone a screenwriter and she corrects him that she’s a playwright, he replies, “Well, you gotta start somewhere.”) He’s so L.A. that the actress who’s reading opposite him can’t contain her disdain; but even without that, he just generally does a terrible job in the audition.

When he bumps into the actress on the street later, they grab a drink and she offers him some “friendly” advice: Go back to Los Angeles and learn how to act, if you want to do something real. “You’re in over your head, Kevin Pearson,” she says, pulling out her phone to check a message… which then causes her to break her glass in anger. “You got the part. They think The Nanny will sell tickets,” she says, huffing away as Kev quietly corrects her about the title of his greatest work thus far.

Later, Kevin shows up at Randall’s and asks to crash there for a while. Randall and Beth say yes; their faces say, “God, why?” And when Kevin and William make eye contact, Randall introduces the older man as his biological father. “Wait, was that The Manny?” William asks, starstruck after Kevin leaves the room. Ha!