This Is Us‘ Randall was almost a Kyle.

While that trivia is nowhere near the biggest revelation of this week’s (thankfully) twist-free episode, the story of how Jack and Rebecca’s second son wound up with his name provides important insight into the family’s past at the same time it illuminates the tragic courtship of Randall’s biological parents and addresses the pilot’s too-easy handling of the grief over losing a baby.

In short: This Is Us feels like it’s settling into itself, and the good news is that it’s still incredibly watchable — even without a “Grandpa Miguel WHA?” moment at the end of the hour.

Read on for the highlights of “Kyle.”

THE ADVENTURE BEGINS | A flashback to the 1970s shows us William, as a young man/poet, noticing a beautiful woman on a city bus. As we watch, they fall in love. He writes poems in a notebook. Everything is great… until drugs begin to have a very clear effect on their romance. They’re both spaced out, with him scribbling nonsense in the same pad he used to fill with verse. And then, suddenly, young William is there without her, holding Randall as an infant, wrapped up in a sweater.

Cut to Jack and Rebecca leaving the hospital with the kids, whom they’ve named Kate, Kevin and Kyle in honor of their saintly obstetrician’s last name. She admits to feeling overwhelmed, and Dr. K. watches her with a kind yet clinical eye: He’s seen postpartum exhaustion and/or loss before, and she’s certainly swimming in both. But Jack is all “Let’s go! Big adventure! Woo!,” and when he bounds off to get the car, Rebecca notices William standing on the other side of the street. She shouts to him, but he leaves.

At home, the babies freak out despite the mellow AM gold that’s bumpin’ on the soundtrack. (Jackson C. Frank’s “Blues Run the Game,” for your Spotifying pleasure.) During a brief moment when none of the babies need their attention, Rebecca laments that Kyle won’t nurse like Kevin and Kate do. “I grew the other two inside me, and he feels like a stranger,” she says, feeling guilty. She tries to mention William’s appearance at the hospital, but Jake is far too involved in his “EVERYTHING IS FINE!” campaign to listen. “I was a complete stranger, look how quickly I took to your breast,” he jokes. (OK, it’s funny, but this poor woman is in pain, dude!) 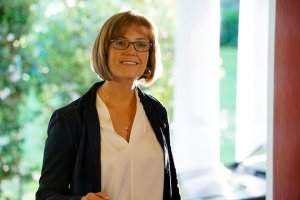 SHAKESPEARE’S SOLUTION | In the present, Miguel explains that he and Rebecca stopped by unexpectedly because “a friend at work gave us his Hamilton tickets.” Hmm, Miguel. I’m already suspicious of you for macking on your (dead?) friend’s wife; this story about anyone “giving” anyone Hamilton tickets only makes me even more wary. Anyway, Randall decides it’s time to tell his mom that William just happens to be in one of the girls’ bedrooms. And when he says, “I know you guys would’ve found him if you could’ve,” the look on Rebecca’s face pretty much sets up what comes next.

Though in front of Randall she and William act like they’ve never met, they certainly have. And when their son is out of the room, Rebecca angrily reminds William “we had a deal.” Via flashbacks, we see Rebecca track down William, whom the bus driver refers to as “Shakespeare” and who asks if he can check in on his kid from time to time. She takes a gander at the heroin paraphernalia around his apartment and adamantly says no, which he seems to understand, and then she admits that she’s not bonding with the child. “Give him his own name,” William suggests. And because Dudley Randall was the poet that William used to read to the boy’s mother… William gives Rebecca a book of the poet’s work, and she leaves.

A NEW START | Back in the present, Rebecca warns William that his son will put saving him ahead of everything else in his life, “so you better damn well be worth that.” The notion scares William so much that he tries to leave; Randall chases him and, with good intentions, bullies him into going to the fancy cancer doctor appointment Randall set up.

That visit brings bad, if unsurprising, news: William’s cancer has metastasized, and he’s got months left. After a few tears and a little prodding from Beth, Randall knocks on his father’s door and starts to use the time they do have by asking to hear about his biological mother.

In the flashback, Rebecca and Jack talk about how they both can’t stop thinking about the baby they lost. Feeling more united, they evidently agree about renaming their adopted son: When Rebecca (successfully) breastfeeds him later, she says, “Hi, Randall.”

IF YOU’RE LOST, YOU CAN LOOK AND YOU WILL FIND ME | The morning after Kevin’s Hollywood party, Toby wakes up on the sofa and marvels at Kate, who is singing to herself in the bathroom. He tells her she’s got a great voice and tells her to sing in public, but she quickly shuts that notion down. While they’re having a lackluster (though calorically on-point) breakfast, Kevin bounds in, all excited about his upcoming move to New York.

“Wait, that was real?” his twin asks. Turns out, Kevin really wants to do theater in the Big Apple — “Maybe you should specify that I don’t want to do anything where I have to show my penis,” he later hedges — and assumes that his sister (whom we later learn is also his assistant) will come along. So he starts packing his stuff. (Side note: Kevin’s slouch-cap mannequins might just be my favorite things in this episode).

But Toby wants to put the spotlight on Kate and how awesome she is, so he shows up at her house and offers a day where she’s the star, complete with red carpet, paparazzi, a chauffeur and a singing gig… at his aunt’s nursing home. No, Toby! Old people have no filter! What are you thinking?! But Kate nails it, singing Cyndi Lauper’s “Time After Time,” aka the Anthem of ’80s Girls Who Wanted to Emote But Did Not Have Anything to Emote About at the Time.

It goes so well that Kate is ready to bang Toby in a janitor’s closet, but a call from Kevin sends her scurrying home to help him handle an out-of-control ex… and Toby is finished with their twin ish. “I can’t play second banana to your brother,” he grumbles. “You have to,” she says, not sorry. “Everyone has to.”

LATER, BRO | But after a heart-to-heart between the double Ks, Kevin fires his sister for her own good. He says it’s time for them to have separate lives for a while. “I don’t really know who I am if I’m not your sister,” she says. “I do,” he answers. “You’re gonna love her.”

So Kate calls Toby over so she can apologize in person, something that doesn’t work until she brandishes a condom. “I accept your apology,” he says quickly. (Heh.) And while the lovebirds are getting it on, Kevin hops on a redeye to New York to start up his new life.