Holy cornucopia, where in the world is Pilgrim Rick when you need him?!

No, the action of this year’s This Is Us‘ Thankgsiving-adjacent episode doesn’t take place near or on the annual holiday. And yes, a creepy dude wearing a goofy buckle hat probably would be out of place in an hour that focuses on with Kate’s miscarriage and the maelstrom of emotions the loss of a child creates. But even though “Number Two” turns out to be a far more hopeful episode of television than the Kevin-centric installment that precedes it, I can’t help but long for the levity that some of those silly Pearson Thanksgiving traditions — Police Academy 3 and all — would’ve brought.

OH NO | In the present, Kate takes prenatal vitamins and happily talks to the baby growing inside her. While the writing is cute, and Chrissy Metz does a good job with it, on-screen monologues delivered to thin air — see also: Kevin’s gridiron soliloquy in the last episode — almost always take me out of the moment and make me remember that we’re watching #acting. A little goes a long way there, is all I’m saying. (Cut to next week, when I’m openly weeping as Randall pontificates in an empty Bed Bath & Beyond aisle or something.)

Later, Toby prepares Kate a smoothie while she makes a list of questions she wants to ask her doctor. “Make sure you ask ‘When will the baby move?’ so I can say, ‘Hopefully, as soon as he turns 18,'” Toby jokes. She chuckles, then heads into the bathroom. But a moment later, she calls out for him in panic. And when we see next see them at the emergency room, we get confirmation about what Randall informed us of last episode: Kate has miscarried. Kate and Toby look understandably bereft.

MOVING ON, WITH HELP FROM MOM | At home, though, Kate tries to go about life like nothing happened. She dresses up for a lunchtime gig, all the time flashing back to sobbing in the bathroom after she was struck with pain. She ignores calls and texts from her mother, puts on some makeup and gives Toby the breeziest of blow-offs when he insists that she stay home and rest with him. “Kate, this is insane,” he says. “We just had a miscarriage.” She stares at him, saying, “Thanks, I know. I was there.”

So while Toby fumes in grief — tossing out the shower curtain Kate accidentally ripped down when she was in pain, driving to a distribution center in an (ultimately successful) attempt to stop the delivery of an infant bathtub from getting to the house, where it’ll be a sad reminder of what’s happened — Kate goes to her gig… and leaves in the middle of a set when she can’t stand to watch a sweet little girl dance in front of the stage. 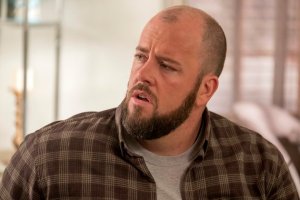 So she walks. She cries. She enters one of those all-you-can-eat buffets and loads up a plate… but winds up deciding not to take a bite. (Side note: For what it’s worth, this was the moment I knew Kate was going to be OK. And I was prouder of her than anyone should be of someone who doesn’t actually exist.) But when she gets home, Toby is really mad: He went to pick her up, as planned, and feared the worst when he couldn’t find her. Their sadness and anger explode into a fight. She accuses him of getting her hopes up about the baby, then takes him to task for saying that “we” had a miscarriage. “Toby, it happened to me,” she says. “It didn’t happen to you.” That makes him perhaps madder at her than we’ve ever seen. “What I will not do, what is not fair of you to do, is to tell me that I wasn’t part of this,” he replies, livid but controlled, his eyes full of tears. “It happened to me, too, and it hurt.”

Kate sleeps on the couch that night, and when she wakes up the next morning, Toby has left a note saying he needed some air. Then Rebecca shows up to hug her daughter, who dissolves into sobs as her mother soothes her. Later, they talk about how Rebecca never held Kyle, and how she thought withholding her grief from Jack would help him. (Spoiler alert: It didn’t.) She shares how she freaked out at another customer in the grocery store when The Big Three were just a few weeks old; as we watch the flashback, it’s clear that Rebecca — who’s yelling “It’s not fair!” about losing out on a sack of yellow onions — is reacting to a whole lot more than produce.

“I love you more than I can bear, Bug,” Rebecca says, pulling her daughter close in the present. MANDY, YOU ARE KILLING ME, YET PLEASE NEVER STOP. 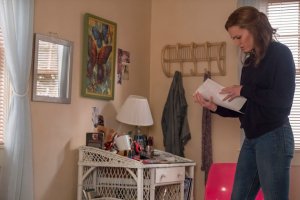 FRIDAY NIGHT BITES | Let’s pause for a second to look at the day from the kids’ teenhood, this time from Kate’s perspective. We’re still on the evening that the Pitt coach visits for dinner with Kevin, only now we’re seeing things from Kate’s perspective, dog pee and all. Rebecca is after Kate to produce a list of five potential colleges she’d like to attend, but Kate is all rolled-eyes and dragged-feet about it. So when Rebecca finds a filled-out Berklee School of Music application and audition tape on her daughter’s desk, she’s simultaneously filled with pride and a little sadness: Why didn’t Kate tell her?

Rebecca broaches the conversation at Kevin’s game that Friday night; she gives Kate a $50 check and encourages her to go for it. In the way that most teen girls are terrible, Kate is instantly incensed that her mother would invade her privacy, but she gets over it and even eventually gives Rebecca a little half-smile when her mom says she’s got a real shot at getting in. But then Kevin gets tackled, and everything is bad again.

As they wait both for Kevin’s MRI to finish and Jack and Randall to arrive, Kate apologizes for not telling Rebecca about Berklee. “If I don’t get in, I think it’ll crush me. I just could not deal with disappointing you on top of that,” the girl says earnestly. Rebecca is taken aback, saying she’d be disappointed for Kate, not in her. “Yeah, sometimes it’s hard to feel the difference,” the teen shoots back.

A UNIFIED FRONT | Back in the present, Toby comes home. Rebecca takes her leave for a while so the couple can make up. Kate and her fiancé cuddle on the couch, and Kate admits that “I feel like I failed you,” a notion he quickly dismisses. Then she whispers that she wants to try again, and he’s happy to hear it: He does, too. Then all that’s left is to fish the not-really-broken shower curtain rod out of the rubbish area and reinstall it. “We will not let this break us,” she says, and he agrees, “No, we will not.”