There are some Friday nights under the lights that even Coach Taylor wouldn’t be able to save.

Kevin has one of ’em in this week’s This Is Us, which chronicles two fraught nights in the Pearson sibling’s life: one where he first busts his knee, thus ending his dreams of collegiate and professional football glory, and one where he returns to his high school, literally high, and makes a chain of very poor choices.

And that’s all before the episode’s worst development comes to light. Steel yourselves as we review the Kevin-centric hour, “Number One.” (And for Justin Hartley’s insight on the episode, make sure to check out our post mortem interview here.)

HOMECOMING | Though the hour begins with a flashback to Jack and Randall taking home movies of The Big Three as about-to-walk toddlers — Kevin, the firstborn, also takes the first steps of the three kids — it quickly cuts to what the former Manny is up to lately: drinking a lot, taking a lot of pills, creating a disgusting mess in his hotel room and avoiding the shower. Kev’s marathon of booze and red-eyed self-loathing is momentarily interrupted by the arrival of the hotel’s cleaning staff, whom he hasn’t allowed in the room for a week. But when he realizes that the housekeeper can also restock his depleted minibar, he happily admits her entrance.

As she gawks in horror at the sheer number of empty bottles and such, Kev gets a call from a high school girl at his alma mater, reminding him that the alumni honor ceremony is the next evening. (He forgot.) “Old high school wants to honor me. Should I go?” he asks Martina, the maid. “Is it outside this room? If it’s outside, you should go,” she deadpans. (Side note: Better Things‘ Rebecca Metz is great in this tiny part.) And since he was planning on going back East for Thanksgiving anyway — well, as much as he’s “planning” anything these days — he drags his pharmacologically compromised self on a plane and heads to Pittsburgh. 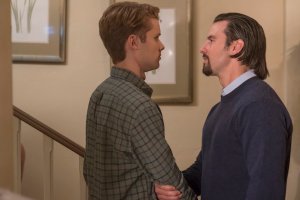 SERENITY NOW | Let’s put a pin in Kevin’s continuing downward spiral to flash back to when he, Randall and Kate were in high school. One evening, Jack and Rebecca bustle around in preparation for an important dinner guest: Coach Walter from Pitt, who’s there to talk to Kev about possibly attending and playing for the school. But the teen swings between insouciant and downright rude, making it clear that he thinks he’s destined to be part a star quarterback at a better school.

Jack and Rebecca are properly mortified, and the moment the coach leaves, Jack is about as mad as we’ve ever seen him. He can’t believe that his son acted like an asshat to someone who offered Kev, “a C+ student at best, a full ride to a good college!” When Jack demands that Kevin write the coach an apology letter, Kev makes a crack about Alcoholics Anonymous, and Jack gets deadly still. “Do you have something you want to say to me?” he says, sounding like he’s using all his restraint not to throw the boy through the living room window. “Nope,” Kev says, continuing his ridiculousness. “It was embarrassing to watch you behave like you just did,” Jack growls before Kevin goes downstairs to write the letter. “I know the feeling well,” the teen says, a parting shot that finds its mark.

Later that night, the warring Pearson men run into each other in the kitchen. Jack apologizes. Kevin doesn’t. But later, after an apparent change of heart, Kev comes back upstairs and overhears his dad on the phone with his AA sponsor. After he hangs up, he gets down on his knees and prays the Serenity Prayer. From down the hall, unseen by his father, Kevin cries as he watches.

KEV’S BIG BREAK | Still, Kevin is chilly to his dad before Jack and Randall leave for a college visit that will keep them away from Kev’s football game. But as we see when the game gets started, this is the one where Kevin experiences the “catastrophic” break that ends his potential football career. In the stands, Rebecca knows it’s bad from the minute her son goes down; she tasks Kate with paging Jack, who (with Randall) meets them at the hospital.

And after the MRI is read, Jack is the one who breaks the news to his devastated son: With time and work, he’ll be able to run again, but he’ll never play football again. Kev cries both in grief over the loss and in shame from how he’s treated his pop. “I’ve been awful to you, and I could do better,” the teen sobs. Jack clasps his kid’s hand and promises him that he’s got other talents he can pursue, then he gives Kev the medallion he’s wearing around his neck. “Someone very special gave it to me, back in Vietnam,” he explains, adding that it’s a Buddhist symbol for “purpose” and that he received it when he was having a really hard time. The day Kevin, Kate and Randall were born, he says, he suddenly knew: “You were my purpose, Kevin. And I swear to you, son, you will find yours.” Then Jack kisses and hugs Kevin, who’s still bereft and lying in a hospital bed, and it’s incredibly bittersweet. 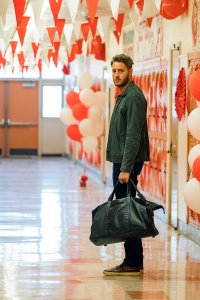 BROKEN MAN ON CAMPUS | Unfortunately, bittersweet is about as sweet as it’s going to get for the rest of the episode, because in the present, adult Kevin is not doing so great. He arrives early for the honors ceremony, killing time by wandering the halls drunk/high and envisioning his varsity-jacketed glory days. His powers of perception aren’t doing so well, either: He mistakes Kelly, the teen who called him earlier in the episode, for Sophie, and he can barely keep it together for small talk with other honorees at a reception before the ceremony.

Once he’s called up on stage, Kev is surprised to see that his old coach Duffy Collins (played by James Read, who will always be North and South‘s George Hazard to me), has come out of retirement to tell the assembly exactly how awesome his former student-athlete is. Coach Collins gives a glowing speech about how Kevin had the most “natural talent, confidence and charisma” he’s ever seen in his career, but how when life dealt him some rough breaks, “that’s when he really showed himself to be a star.”

Though Kevin doesn’t believe a word the coach is saying, his addled and highly emotional state makes him imagine that Jack is giving it. And as the choked-up coach goes to hand Kevin his award, we see adult Kev and adult Jack hug for the first time.

But when the spotlight is on Kevin and it’s his turn to talk, he’s disdainful of the accolades and applause. “What you said was wrong,” he starts, rambling and shucking off the crowd’s love until he finishes with, “The truth is, I’m not worth of this award or any honor, for that matter.” He still gets a standing ovation. Given the number of social media-obsessed adolescents with smartphones in that room, I’d say you got off easy, Kev.

Afterward, Kev shuns the romantic advances of a former classmate-turned-humanitarian-plastic-surgeon to hang out on the football field and give a play-by-play of exactly how his life has gone wrong — and right — since that fateful night his knee was destroyed. A running theme: why he keeps getting rewarded by the universe, despite the fact that he thinks he’s a human garbage heap who treats people badly. “Even when he tries to tell people how pathetic he is, they don’t hear it,” he laments. “They just cheer.” His monologue (which Hartley nails, by the way) is interrupted by a visit from the blonde high schooler he thought was Sophie earlier. “Wanna party?” she asks.

SOMEONE ELSE’S SADNESS | When the next scene is of Kevin, naked in bed with an unseen female, I write, “OH NO NO NO” in my notes. But, phew! He’s bedded the plastic surgeon, not the probably-still-a-legal-minor. Though he’s sweaty and checked-out, the plastic surgeon is flying high: She bagged the hot, popular kid she had a crush on all throughout high school. As she wonders aloud why Kev wanted to have sex at her place, he stumbles to the bathroom and we get our answer: He wanted to raid her medicine cabinet for painkillers. When he doesn’t find any there, he asks her to make them some food, and while she’s downstairs fashioning a feast, he steals a page from her prescription pad and ghosts.

But while in line at the pharmacy, the faked ‘script in his fist, he realizes he left Jack’s medallion at her house. So he runs back without trying to fill the prescriptoin and rattles her door until she yells from a second-floor window that she doesn’t know where his jewelry is — and he’s a “son of a bitch” for how he treated her. As she slams the window shut, Kevin has a full-on breakdown in the front yard, whimpering that the necklace was the only piece of his dad he had left. Pretty soon, he’s just crying, near-incoherently, and it’s hard to watch in a good way. “I just need it to stop,” Kev says, weeping. “I just need somebody to help me.”

And that help may have come from Randall… if something truly awful hadn’t happened in the interim. When Kevin shows up at his brother’s door, he brokenly begins, “Randall, I need to tell you something.” But Randall interrupts, “It’s OK, I already know.” Kevin’s confused, but he also hasn’t been answering calls from Kate and Toby all episode. And yeah, the thing we thought might happen, happens. Randall puts it simply and sadly: “Kate lost the baby.”

Your turn. What did you think of the episode? Hit the comments with your thoughts!