For This Is Us‘ Kevin Pearson, the self-inflicted hits keep on comin’.

This week’s episode started with Justin Hartley‘s character returning to his high school as an alumni-award recipient. Great, right?  But the hour soon devolved into a shame spiral for the emotionally bereft Kevin, whose dependence on drugs and alcohol to numb past and current hurts led him to steal a page from a doctor’s prescription pad (!) and miss being there for his twin, Kate, as she underwent a terrible loss. (For the full story, make sure to read our episode recap here.)

“You don’t look at someone like Kevin and say, ‘Yeah, that guy is going to turn into a helpless, pathetic person,'” Hartley tells TVLine. “But if you look at it, you dissect it and you peel back a lot of layers, you can see it is the perfect storm, and the perfect person that something like that would happen to. Because he just wants to be accepted… and for someone to say, ‘You’re good’ and give him a hug, and he’s not getting it.”

In the wake of this week’s hour — the first of a trio of episodes focusing on The Big Three as individuals (next week is Kate’s) — we chatted with Hartley about that daunting gridiron monologue, the opportunity to finally work opposite his TV dad and the “really not great moments for Kevin” that lie ahead. 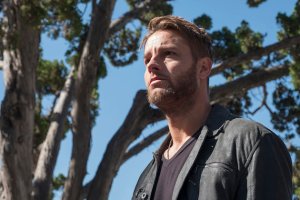 TVLINE | I feel a little guilty, because when we talked before the show premiered, I mocked Kevin’s “problems” a little: Kate had the weight stuff, and Randall was searching for his birth father, but Kevin just seemed like an actor who was lacking purpose. And it turns out that he’s got just as big an issue, if not bigger, as the other two. Talk to me about his trajectory.
That was the whole thing from the beginning: I don’t think it was clear that he was going to go down this particular path, but you started to see that that’s what Jack’s issue was, and that’s when I was like, “OK, that’s where he’s going to go.” He’s a guy who can’t deal with his father’s death. Doesn’t want to talk about it. Deals with it by not talking about it, which is always great, right? Bottle it up inside. That’s healthy. But he doesn’t have the tools to deal with it. He’s shut it out.

It’s a massive part of his life. It’s not like an ex-girlfriend that he dated for a couple of months and he’s like, “I’m going to pretend I never met her.” This was his father. And they didn’t always have the greatest relationship. In him always wanting to make his father proud and be the best at everything, and have his father be, “Oh wow, you’re so amazing,” he wanted to be like his father his whole life until he realized his father was not who he thought he was. And then he became kind of embarrassed by him. Then he felt guilty for being embarrassed by him. And then he gets older and he’s carrying that guilt around, like “Why couldn’t I have been there for my dad?” He lost him, and there’s no closure. The whole thing is troubling, it’s like the perfect storm.

TVLINE | Throughout the episode, I kept waiting for Kevin to hit rock bottom… but he doesn’t hit it in this episode. There’s still a lot of bad stuff that could happen to him, and a lot of bad decisions he could make, before he’s at his lowest. What can you tell me about where he’s headed, emotionally, after this?
Yeah. It’s in Kevin’s DNA to try to either bury things or deal with them on his own, or not talk about then, or make light of situations that are actually very serious. It’s not in his DNA to seek help. Unfortunately, this kind of thing, you can’t do it on your own. It’s impossible. You don’t hear a lot of stories, like, “I had this drug addiction, I just went into a room, and I kicked it.” That’s not gonna work. He’s going to his brother for help, because he knows Randall will help him or listen to him at least. He’ll do whatever he needs to do to help him… But he gets hit with this information [about Kate’s miscarriage], and he realizes this is not the time to talk about [his problem]… Like I said, it’s in his DNA to try to handle things on his own and to bottle things up, and that’s what he tries to do again. Without giving away storyline, I can just tell you: That is not a good way to solve things. Worse things will happen if you do that. So we’re going to see some really not great moments for Kevin.

TVLINE | Given the bond between Kevin and Kate, it seems like her loss could push him farther down his spiral. What can you tell me about that?
He’s just feeling horrible and hating himself and feeling depressed. This is his twin sister. They’ve spent their whole lives together. She goes through this moment, which is the toughest moment of her life, and he is M.I.A. Not answering her calls. It’s the worst thing in the world. The one time he should’ve been there, and he’s not there. There are parallels between that and his father’s death. All that guilt that he carries just pushes him over the edge.

TVLINE | I loved seeing you and Milo Ventimiglia have a scene together.
Me, too!

TVLINE | That was your first, right?
That’s the first time I’ve ever worked with Milo, ever, in my life. It was great. I’ve been talking about it for a while… Because I get to work with Mandy, but I don’t get to work with Milo. And then they figured out a way. I don’t think they did it just so we could work together — I don’t know, maybe they did — but it wasn’t this excuse to work together. It actually made sense in the scene and told a great story. 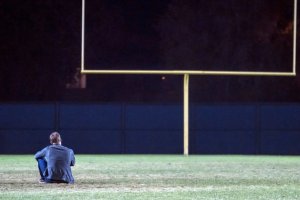 TVLINE | Talk to me a little bit about that scene on the football field. That monologue seems like it could be a tricky thing to pull off. How did you approach it?
The first time I read it, I thought, “This is going to be difficult to pull off.” …Here’s this guy who’s talking about all of his accolades and all of his failures, and then feeling bad about the fact that he keeps getting dealt aces over and over again. When he f—ks up, he doesn’t get punished for it. He gets rewarded for it, over and over and over again… People keep making excuses for it. I’m like, “How am I going to make anyone feel bad for this guy?” That was my very first reaction when I read it. Like, “Aw, crap.” [Laughs] It’s extremely well written, it’s beautiful, but that’s a task right there. That’s a chore. Then I read it eight or none thousand more times, and I don’t know. If that’s his truth, if that’s his life, if that’s what he really believes, then who can tell him he doesn’t believe it? … Yeah, that’s a tricky one. [Laughs] I got some help from great directing, great writing, great cinematography, great location and a great crew. I got a lot of help with that one. I think we pulled it off.

TVLINE | Do you remember how many takes it took you to nail it?
One.

TVLINE | What?!
Yeah, we did one. [Laughs] I’m just kidding! … I’d have to ask [Executive producer] Ken [Olin], I don’t remember, but I don’t think we were out there long at all. It’s one of those things where — and I don’t do this, anyway — but you don’t really come to work and try to find it. You’d better have it. Our show is like that. You should have it at home. Don’t come to work and try to figure it out. I think that would get exposed on our show rather quickly, if you tried to do that.

TVLINE | Ken was directing the episode.
Thank god. He’s great. He’s there a lot. He’s an actor’s director. He’ll let you do your own thing. He’s not afraid to say, “Let’s do it your way.” He’s not afraid to say, “I’ve got an idea. Let’s do this” or “Have you thought about this?” We’re two totally different people and the way we approach things is different, but for whatever reason, it works really well. I really enjoy having him there.

TVLINE | Are you in the next two episodes?
I think so, yeah. Maybe a tick in each one. The storyline, the three-part whatever we’re doing, it takes place at the same time… I’m in at least one of them.