Just before This Is Us‘ Season 2 premiere, we guessed that perhaps the show’s writing staff would somehow work Alexandra Breckenridge’s real-life pregnancy into Sophie and Kevin’s storyline this year.

Turns out, the Pearson family is gaining another bundle of joy this season. But, as Tuesday’s episode made clear, the baby isn’t Kev and Sophie’s: It’s Kate and Toby’s.

In the final moments of the hour, titled “Still There,” Kate gets an ultrasound. That’s when we learn that the pregnancy that Kate detected a little while ago (offscreen) is still present, and that she is about six weeks along. Kate is very happy to hear the news.

The reveal is a bit of a twist: The entire episode, Kate works out like a demon and brushes off Toby’s advice to slow down, and we’re led to believe it’s because she’s worried about fitting into a new dress that she wants to wear for her first paid singing gig. Even when she visits a drug store, it kinda seems like Kate is looking for some kind of miracle weight-loss supplement to help her achieve her goal. (Turns out, she’s just buying prenatal vitamins.)

The start of new life feels like like a very positive thing for Kate, who remarks to her doctor that she’s very aware of how her age and her weight can complicate matters. But all seems well, at least for now, except for the fact that Toby doesn’t know yet. But she’ll probably tell him soon… right?

Elsewhere, Deja opens up a little then closes off a lot, Kevin has surgery and Rebecca’s mom proves herself the absolute worst. Again.

A POX UPON YOUR HOUSE | Let’s start with the flashback, which takes place when The Big Three are 10-ish. The family is at a video store, prepping for an incoming snowstorm, when Kevin is even whinier and crankier than normal. Rebecca realizes he’s burning up, so they all head to the doctor, where the twins are diagnosed with chicken pox. Jack remembers having them as a child, and after a call to her mother, Rebecca confirms that she’s not susceptible to the virus, either. The doctor suggests that a still-healthy Randall try to get them, too, in order to knock out the illness all at once.

Kevin and Kate are scratching themselves silly at home when Janet, Rebecca’s mother, shows up to “help.” Rebecca and Jack aren’t pleased, given how she’s super judgmental and not all that accepting of Randall, but they bite their tongues, and Rebecca makes her husband promise to be a buffer between her and her mom. Things start out normally — Janet gives Kevin a football helmet, Kate a Little Mermaid dress that doesn’t fit (“You can use it as your goal dress,” Grandma horrifyingly advises her) and Randall a basketball (horrifying in a different way) — but get worse after Jack, who apparently didn’t have chicken pox as a child, comes down with the illness, too. 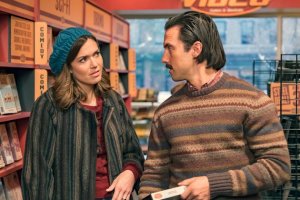 GRANDMA’S GOTTA GO | That leaves Rebecca and her mom with too much time together, and after Janet casually remarks “Who would’ve thought that Randall would’ve been the one to get into private school?,” Rebecca lays into her. She starts by saying that the reason she and her family don’t visit anymore is “because of you,” and goes on to point out that Janet has “made it alarmingly clear” that the reason she’s not as close with Randall as she is with Kate and Kevin is because he’s black.

“When the snow is gone, I want you gone, too. Because I will not expose Randall to any more of this crap. You’re a racist, mom,” Rebecca says, furious. “You’re a racist.” Too late, the women realize that Randall is standing behind his mother, ready to tell her that he’s finally contracted chicken pox, too. Wincing and holding back tears, she kisses him on the head and hustles him back upstairs.

And that’s where a still-ailing Jack and Rebecca try to explain subtle racism to their confused son. They remind him of when they were talking about Martin Luther King, Jr. “Someone shot him because he wanted to give black people equal rights,” Randall recalls, then adds in the best line reading ever, “Did Grandma shoot him?!” Ha! They set him straight as best they can, but it’s a rough talk, and Randall goes to bed dejected.

In the morning, Jack levers himself out of bed to shovel Janet’s car out so she can leave. And then, after a few halfhearted attempts at reconciliation, she does.

IN KNEED | In the present, Kevin limps around on his bum knee until Brian Grazer, who’s producing the film, forces him to get it looked at. The doc says he needs surgery, so that happens, and then Kev stays with Kate and Toby while he’s recovering. Or rather, he rips off his brace, skips the whole rest-ice-compression-elevation thing and decides that he’s going to rehab his busted joint in five minutes, then go back to work.

It’s a silly decision, but one fueled by Kevin’s past experiences: He was a football star in high school — as evidenced by some exuberant VHS tapes Jack made — but the initial knee injury put an end to the college-scout visits and such. And when Kev realizes that at least one of his lines in the big scene has been reassigned to another actor while he recuperates, he pops a pain pill, has some flashbacks to when Jack helped him man-up during the chicken-pox incident, and drives to work, pretending that everything is fine. (P.S. It won’t be.) 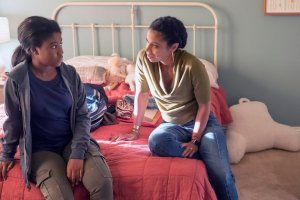 BAD HAIR DAY | No matter how fun Randall makes it look as he attends to Tess and Annie, Deja won’t submit to having her hair cleaned and styled. And it’s becoming a problem, as Beth points out, because the teen is beginning to smell. But Randall asks his wife to back off and let him handle the situation his way. “Look, for nine years, you got to be the lead parent,” he points out. “May I take the lead here, please?”

So she acquiesces… and it’s a disaster. First, some girls make snide comments about Deja’s ‘do during an outing to a bowling alley, and after Deja shoves one of the teens, the whole thing turns into Randall almost getting into a fistfight with the girls’ dad. After getting the green light, Beth steps in and has a quiet talk with Deja, who starts to open up to her foster mom. As Beth brushes the girl’s hair, she notices that patches are missing: She recognizes it as a condition known as alopecia and notes that one of her sisters has the same thing. Deja hesitantly admits that the hair loss gets worse in times of stress, and Beth — who implies that she’ll keep Deja’s secret — gently suggests that she can style the teen’s hair in a way that will cover the bald spots.

Later, in a moment of unguarded joy, Deja’s smiling and admiring her new braids. But then a well-meaning but utterly graceless Randall stops by and, in the space of a few breaths, goes from complimenting her to blurting out that he’s had two nervous breakdowns in his life, and that running helps him manage stress. He invites her along for a jog whenever she feels like it… but what an angry Deja quickly realizes is “She told you what I said?” Randall’s response: “Uhhhhhhhhh.”

At the next meal, Randall and Beth are horrified to notice that Deja has cut off all of her braids, and her hair looks like it was trimmed with a weedwacker. But she doesn’t acknowledge what she’s done, and the shocked Pearsons say nothing.