You know that feeling when you sense you’ve experienced something already, but there’s no way you could have? It’s a major theme in this week’s This Is Us, which draws parallels both heartwarming and more-than-vaguely troubling between the modern Pearson family and its forebears.

You know that feeling when you sense you’ve experienced something already, but there’s no way you could have? It’s a major theme in this week’s This Is Us, which draws parallels both heartwarming and more-than-vaguely troubling between the modern Pearson family and its forebears.

Read on for the highlights of “Déjà Vu.”

ARE YOU GOING TO THE BUFFALO TOM SHOW? | In the past, Jack is three weeks sober and finding living without alcohol tougher than he thought it would be. Mainly, he tells the crowd at his Alcoholics Anonymous meeting, that’s because he’s having to confront uncomfortable feelings he’s tamped down for years. He laments that he was raised to be a tough guy, even though now “guys like that sensitive kid on My So-Called Life are in, at least that’s what my daughter told me,” he says. (Because I’m no longer the naïve little girl I was when I lived, ate and breathed Angela Chase, I immediately think he’s referring to Krakow, aka the guy who really loved her. But of course Kate’s gotta be drooling over the dreamy-yet-stupid Jordan Catalano, right? Because that’s how teen girl brain usually works. Sigh.) Jack adds that he hopes his sons don’t turn out to be “cavemen like me.”

We see a few glimpses of Mama and Papa Pearson being weird around each other, and when Rebecca has lunch with Miguel’s ex-wife Shelly, she confesses that she and Jack haven’t had sex in quite a while. So on Shelly’s suggestion, Rebecca gets all gussied up and surprises Jack by picking him up at work and taking him on a recreation of one of their really great dates: burgers, the parking lot of a concert venue and — hopefully — car sex.

CAR TALK | But when she jumps on top of him, Jack tells her to slow down — not in the “I want to savor this” sense, but in the “I’m having a tough time making this happen” sense. And with both of them feeling a little embarrassed, Rebecca climbs off and they drive home. In the driveway, he confesses that he knows that getting better means he has to “sit in” the emotions that being in treatment is dredging up, but he didn’t want to feel that way while he and Rebecca were having sexytimes. Rebecca tells him that he’s the strongest person she knows and even if he’s not sure of it, “I know. I know.” A slightly more positive Jack suggests they get back in the car, because “I miss talking to you, and I’m not ready to stop yet.”

So he tells her about how he had to borrow money from his dad to buy their house, and he warns her that there are other secrets that he’ll tell her eventually… but not yet. “I’m ready when you are,” she says, all supportive and understanding, and then they kiss (and more) for real this time.

PEARSONS + 1 | Also in the past: Unbeknownst to his folks, teen Randall places a classified ad to look for his birth parents. And when a woman writes back saying that she’s his mom, they set up a time and place to meet. Kevin and Kate find out and accompany their brother, whose hope for a reunion is so earnest, it’s painful to watch. Randall’s alleged mom turns out to be a twitchy white woman who waits all of five seconds before bringing up the idea that his ad said he wasn’t looking for money, so that must mean he has some. Randall quickly flees.

In the present, Randall and Beth get the call they’ve been waiting for: A teenager named Deja is going to be their first foster child. She arrives soon after, but all of Randall’s well-meaning, Type-A prep doesn’t make much of an impression on the girl, who’s so out of sorts after her mother’s recent arrest, she just wants to go to bed. Randall freaks a little when the social worker, Linda, says her goodbyes and prepares to leave. Deja doesn’t seem OK, he notes. “That is correct. She is definitely not OK. She just got yanked out of her family and plopped down with a bunch of strangers,” Linda points out, reminding him that being a foster parent is an unpredictable ride, so he’ll have to take every day as it comes. Poor Randall — that is just about the scariest thing anyone can say to him. 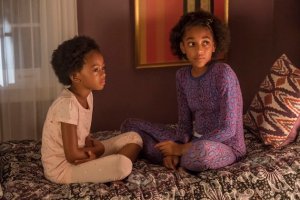 ANNIE = MVP | Upstairs, Beth is helping to put away Deja’s things when she sees a pack of cigarettes in the bag. An argument ensues, with the teen calling Beth a bitch, but Deja flinches and quiets down quickly when Randall enters the room. Shaken, everyone prepares to go to bed.

Later on, Deja wakes up Tess and Annie to ask who’s in charge in the house. They initially pay lip service to the idea that both parents share power equally, but when pressed, the girls admit that Beth is the true ruler of the family. (Ha!) And what happens when the girls get in trouble? Deja wonders. Annie and Tess tell her about talking it out and then losing iPad privileges; her face, as well as her shock that each Pearson daughter has her own tablet, speak volumes about the disparity in their upbringings. “This house is crazy,” Deja muses, prompting Annie to flashback to when she talked William out of leaving their house the first night Randall brought him home. She remembers leaving a sleepover early because she was scared, then having FOMO after she got home. “Maybe if you stay here, you’ll have fun. And if you go home, you’ll be sad,” she reasons. He stays. (Side note: Good lord, little Faithe Herman is darling.)

In the present, Annie says Deja can stay in the room with them if she’s scared. She asserts that she’s not… but then stays, anyway. Randall and Beth, listening via a baby monitor Beth put in the girls’ bedroom, let out the tense breaths they’ve been holding.

The next morning, Deja apologizes to Beth for calling her names, and Randall very soothingly tells her the story of his own adoption and how he thinks her living with them can work out in a similarly fortuitous manner for her. It seems like she’s coming around, if only a little. But then he gently breaks the news that her mother may be going to jail for a long time, and the girl — who’d explained that she’d just taken the cigarettes with her so she could return them to her mom when they were reunited — angrily breaks a photo frame and stomps out of the room. 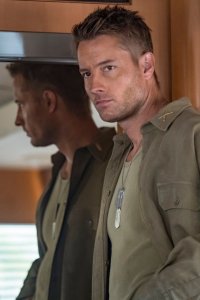 STYMIED BY SLY | Meanwhile, Kate visits Kevin on the set of his Ron Howard war movie. The pair geek out about how awesome it is, especially compared to The Manny, and he’s in the middle of an impression of co-star Sylvester Stallone when Sly himself interrupts. Stallone is gracious and friendly, handling Kate’s starstruck ramblings with aplomb. “I’m going to go check out the frittata situation,” he says as means of exit, and please understand: You have not lived until you’ve heard Rambo pronounce “frittata.”

Kate laments that Jack isn’t there. “Stallone was his hero! He would’ve been so proud of you, Kev,” she says, but her twin brushes off the conversation. Later, as Kevin is running lines in his trailer, Kate fangirls a little more to Stallone at craft services. She says that Jack would watch movies like Rocky when he was sick or otherwise not doing so great, and “I just want to thank you for making my dad feel good.”

As lovely as Stallone is to Kate, their conversation prompts the action star to mention his condolences about Jack to Kevin right before Kev’s big scene. And when Kevin tries to shut down the emotional talk, saying that Jack died a long time ago, Sly nearly reduces the younger man to tears with a monologue about the elasticity of time. “In my experience, kevin, there’s no such thing as a long time ago. There’s only memories that mean something, and memories that don’t.”

So when Howard calls for them to shoot the scene, Kevin can’t pull it together. He’s so inundated with memories of Jack that he forgets his lines, is easily distracted by movement behind the camera, etc. Afterward, Kev lashes out at Kate in his trailer, angrily wondering why she had to bring up Jack’s death with Stallone and saying that it threw him. “It kind of seems that it throws you no matter who brings it up, or when,” she softly points out. So Kevin, who’s clearly having a hard time, gets mean.

“I don’t need to walk around and be sad and damaged just because you are,” he spits, and Chrissy Metz’s facial expression as Kate reacts is so honest, it makes my stomach hurt: It’s the face you make when the one person in the world you thought could never hurt you that way, does.

THE CIRCLE GAME | The memories of Jack continue as Kevin shoots his next scene, the pivotal battle in which Kevin’s character has to save Stallone’s character. Kev flashes back to when Kate told him about Jack’s death — it’s fleeting, so we don’t hear what she said — and in the present, something goes wrong during the scene and Kevin ends up hurting his knee.

“Your bad knee?” Kate asks when he calls her at home, apologizing for what he said earlier. (The answer is yes.) He plays down her concern over his injury, then chokes out what he should’ve said earlier. “Kate, it’s really hard for me with dad,” he says, throat thick with tears, adding that he can’t talk about it now, but maybe one day. “Yeah, maybe one day,” Kate says before they hang up. (Side note: Justin Hartley is on fire in this scene. FIRE.)

At home, Kate looks at Jack’s urn and says, “He’s just like you…” while we watch Kevin hesitantly pop a prescription pain pill in his trailer. Oh no.