This Is Us co-showrunner Isaac Aptaker is the master of understatement.

“Randall had a big year last year,” he says, referring to the hit NBC drama’s first season, in which Sterling K. Brown’s character found his biological father, learned that the older man was dying, invited him into his home, realized that his adoptive mother had been lying to him for most of his life, buried his biological father and then quit his job. Most of the decisions involved in those developments, the EP reminds TVLine, were made by Randall alone — with wife Beth gamely going along for the ride.

So now that Randall has dropped “a huge bomb in Beth’s lap” by announcing that he wants to adopt a child, Aptaker says, prepare to see Susan Kelechi Watson’s character perhaps not be as accommodating as she has been in the recent past.

“We pick up Season 2 with their relationship and how Beth is getting her head around the notion of potentially bringing in a new, adopted child into their relatively already perfect little nuclear family,” the EP adds. The path to another Pearson sibling may not be quite as easy as Randall hopes: You’ll recall that Beth was really relieved when her pregnancy test turned negative in Season 1. “They’re going to have to find common ground and figure out how to get on board with each other’s dreams.”

Ahead of the series’ return Tuesday (9/8c), we grilled Aptaker on all things Big Three-related. Below, read his thoughts on the aftermath of Jack and Rebecca’s big season-ending blowout, Kevin’s long-distance love and Kate’s exciting/scary new career. 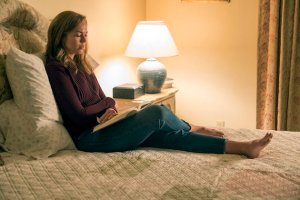 TVLINE | Jon Huertas and Alexandra Breckenridge have been promoted to series regulars. I assume that means we’ll see them in more episodes this season?
Yeah… It’s so much fun writing [the Kevin-Sophie] relationship when you have this really cool history to cut to, with them played by teenage actors and then 10-year-old actors. So once we saw what [Justin Hartley and Breckenridge]  had, we said, ‘Absolutely, she’s amazing…’ As we set up at the end of last season, Kevin has this huge career and he’s this rising star. He’s been offered this huge opportunity of this movie that does not shoot in Brooklyn, where his girlfriend has his busy life of her own… [They’re] trying to navigate how to be together the second time around.

TVLINE | Are there plans to write Breckenridge’s real-life pregnancy into the show?
I don’t want to talk about that.

TVLINE | What shape will Kate’s singing career take as the season gets underway?
She has an amazing voice, as you heard last year. And Chrissy [Metz] — it’s so crazy, actually, how many of our cast have incredible voices. We all knew Mandy Moore, because she had this huge career. But Chrissy, and Chris Sullivan who plays Toby, has a pitch-perfect voice, and Sterling… It’s like our whole cast. We could do The Partridge Family if we wanted to. [Laughs] She wants to be a singer. She wants to follow into the footsteps of her mother and the career that she never totally got to have… It’s going to be a challenge for her, and it’s going to be about how she navigates starting on this new path in life while she’s engaged and wants to make her relationship a priority. Kate’s trying to have it all, and it’s definitely going to be a long road for her, but man, is she a good singer.

TVLINE | There was a line in the Season 1 finale about Sophie wanting to avoid Kevin’s family, especially Kate. That sounds like there might be good stuff coming up between Alexandra and Chrissy in the coming season. Is there?
Perhaps! [Laughs] You are a savvy viewer.