Warning: Spoilers for Season 3 of Outlander ahead. If you haven’t read Diana Gabaldon’s Voyager, skip down to where it says IT’S SAFE.

Sometimes, when you want a thing to happen verra badly, you see signs of it everywhere. Along those lines, I would really like to believe that a new Outlander Season 3 video, released at the show’s Television Critics Association summer press tour Friday, gives us proof that Black Jack Randall is finally dead.

Those who’ve read Voyager, the third book in the Outlander series and the novel on which Season 3 is based, know that Frank’s distant relative winds up dead on the Culloden battlefield. And we know that because, when Jamie comes to and realizes he’s somehow survived the bloody skirmish, he has to push Randall’s heavy corpse off his chest: Though it’s unclear exactly how it comes about, Black Jack dies on top of Jamie. (Talk about adding insult to grievous, long-lasting and psyche-altering injury, eh?)

Now look at this shot from the new footage above and tell me that’s not what’s happening here: 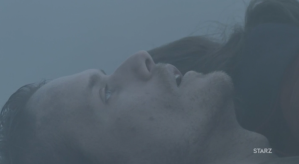 Do we see Black Jack’s evil face? No. But there’s clearly someone invading James Alexander Malcolm MacKenzie Fraser’s personal space here, and that person is a dark brunette. While it’s entirely possible that the body of another brown-haired soldier fell on Jamie while he was unconscious, wouldn’t it be nice if this were our first indication that the sadistic rapist — who’s already cheated death once — indeed bites the big one in Season 3?

The rest of the video offers more peeks at what’s ahead when the Starz drama returns on Sunday, Sept. 10 (8/7c), including:

* A hairy, despondent Jamie collapsing in Jenny’s arms at Lallybroch

* Claire appearing to a despondent Jamie in the aftermath of Culloden

* Jamie taking a verbal beating from Fergus, who says, “Just because you’re a coward now doesn’t mean I am.”

“This is a couple that lasts a lifetime,” series star Caitriona Balfe says in the video, adding that the season is “incredibly romantic.” (Alas, neither she nor Sam Heughan offer up any hint about how long it’ll be before we get to the couple’s infamous print-shop reunion.)

Press PLAY on the video above to watch it all for yourself, then hit the comments with your thoughts!