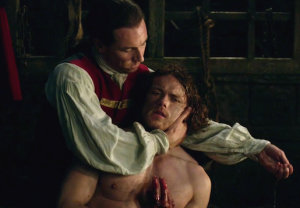 For months now, Outlander‘s Black Jack Randall, a sadistic Redcoat who makes Jeffrey Dahmer look like a mewling kitten in comparison, has had Jamie Fraser in his sights. In the season finale, Randall slakes his desire by taking command of not only the Scot’s body but also his soul.

I was gonna write, “The latter is harder to watch,” but that’s just not true. Both Jamie’s rape and its psychological aftereffects are horrifying, compelling, awful and expertly acted, and they provoke so many reactions/conversations, it’s a good thing we have the rest of the recap — and a summer in the Twitterverse — to hash it all out. So take a shot of whatever whiskey is handy, and let’s review “To Ransom a Man’s Soul.”

BOVINE INTERVENTION | We return to Jamie, lying on the cot, looking like some past-its-prime haggis. Whatever was going to happen at the end of the previous episode seems like it’s already taken place — and for a moment, I thank God and Ron Moore that we’ve been spared the scene that those familiar with the book have dreaded all season. (I’ll be rescinding that gratitude later on.) When the camera moves, we see that Randall is stretched out on the cot behind Jamie; a wide shot reveals that they’re both naked, and when Black Jack gets up and begins to dress, we get the Full Menzies.

The first sign we get that Jamie hasn’t succumbed to the absolute horror that are his circumstances is when he rasps, “You owe me a debt.” Oh right — Randall promised to give Fraser a quick, desirable death in exchange for their terrible night in the cell. The captain seems like he’s willing to keep his word, because he grabs a knife and starts toward the bloody, beat-down Scot but pauses when he hears noise in the hallway. What’s that strange sound? Could it be… hoofbeats?

It is! And no sooner has a curious Randall opened a wooden door than MacRannoch’s entire herd of cattle trample him like someone just called out, “Who wants a burger?” I’m pretty sure that my nerves are just shot from the anticipation of what might’ve happened in the scene before, but the moment he goes down makes me giggle uncontrollably. “Knock, knock.” “Who’s there?” “Interrupting cow.” “Interrupting cow wh–” “MOOOOOOOOOO, JACKASS.”

Anyway, Murtagh, Angus and Rupert are right on the cows’ heels, and once the path is cleared, the three men find Jamie face-down in the cell. The sounds Fraser makes as they cover him and roll him over are inhuman, but the cows are making enough noise to distract the guards. So the trio manages to hoist Jamie over a shoulder and hurry him out the door Claire left open in the previous episode. Yay, right? So why do I not feel relieved one bit?

NO THANKS FOR THE MEMORIES | Maybe it’s because when Jamie comes to in the back of a wagon and sees Claire, dressed in her traveling bard clothes, he thinks she’s Randall and tries to choke her to death. Poor Claire is happy her husband is alive but shocked at how badly he’s hurt and worried that maybe she can’t fix him — and all of that plays across Caitriona Balfe’s face (well, in the moments that Claire’s not gasping for breath like a grounded grouper).

The entire party makes haste to a monastery in Scotland — this is a change from the book, which has Jamie endure a sea voyage to France at this point — where Fraser does his best roadkill impression while retreating further and further into himself. He sullenly refuses to help his healing along. He won’t make eye contact with Claire. When he does speak, it’s full of despair at best and vitriol at worst. Finally, an at-her-wits’-end Claire says Jesus H. Roosevelt Christ to the whole thing and demands to know what Randall did to her husband.

“Too much and not enough,” Jamie replies, eyes averted as he starts a halting description of his rape.

THE HORRID DETAILS | In flashback, we’re right back at the moment Randall returned to the cell after kicking Claire out of Wentworth Prison. When Black Jack removes the nail he pounded into Jamie’s hand earlier, the wounded man vomits and falls off his chair. Randall takes the opportunity to play gentle nurse —

“The worst of it is over,” he lies — cradling Jamie in his arms and touching him lightly, but it’s all lead-up to him demanding that Fraser take a more enthusiastic role in the proceedings.

“So that’s your plan, to submit like Christ on the cross. Well, we’ll see about that,” Randall muses, forcing Jamie to sit and then prying open the Scot’s thighs. Everything he does is in shadow — thank God — but you don’t need to see details to know exactly what’s going on… and how it’s killing Jamie. When Randall ducks his head down to Fraser’s lap, Jamie looks away but, as promised, puts up no fight. I write in my notes: “This is awful.”

Eventually, Randall drops the other man’s kilt, bends him over the table and rapes Jamie while we watch every appalling moment. Later, when a very-out-of-it Jamie has a vision of his Sassenach and reaches for her, Randall demands to know, “What is her secret? Tell me.” Jamie’s dream fades in and out, which causes him to weep and deliriously tell Randall, whose face blends with Claire’s, “There’s only you.”

Because I fear for all of our psyches after so much emotional trauma, howzabout we take a little break while Claire sets Jamie’s hand (oh God, bone through skin bone through skin!) and spends some quality time in the monastery chapel, eh? When Father Anselm hears her entire story — time travel and everything — and believes her, I want to hug him. (Also possible: After Jamie’s recitation, I just need a hug.) 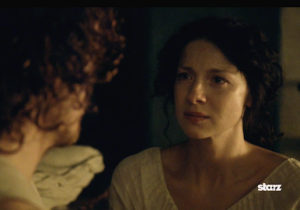 IN WHICH CLAIRE TAKES CHARGE | This wouldn’t be Outlander if danger weren’t rapidly approaching, and Murtagh pops up to say that they need to get Jamie out of Scotland before the British — who by how must’ve realized he’s missing — can find him. He suggests a boat to France, where the Frasers have relatives. (Jared shout-out!)

Jamie has another plan: He wants to die, though both Murtagh and Willie refuse to help him with it. “He’s been tortured. Raped. Isn’t that reason enough?” Murtagh asks Claire, who quickly responds, “No.” One of the monks suggests that Jamie, who’s refusing to eat and burning up with fever, needs “someone to step into the darkness with him” and lead him back to himself. And when we see Claire picking and grinding lavender — a smell from which Jamie recoiled earlier because it reminded him of Randall — it’s on.

VIDEO Power Season 2 Trailer: Ghost Tries to Keep His Affairs in Order — But Can He?

(A brief aside for those who haven’t read the novel: In the book, the scene where Claire goes to Jamie’s room and rescues him from his very dark place is much more surreal than it plays out here. It’s insane and over-the-top in the best way — it introduced me to the word “berserker” — and, much like with Claire’s trip through the stones, the TV series chose to go a more realistic route by showing less rather than more. I’m good with that decision. If you’re not, feel free to let loose in the comments.)

Armed with the lavender, a very tough-love-minded Claire goes to Jamie’s room to get to the bottom of why he wants to die; pretty soon, they’re throwing punches at each other, shouting and crying. Finally, he shows her a brand on his chest and ashamedly admits that, “Randall didn’t just use force to get what he wanted from me… He made love to me, Claire.”

THE LAST OF IT (I PROMISE) | Oh, it’s time for another really disturbing flashback? Thanks, Outlander. In the cell, we see Randall make Jamie brand his own chest with Randall’s mark, then run lavender oil into the burn. There’s a lot of messed-up business that goes on with Randall fluffing out his hair and pretending to be Claire, and Jamie’s aroused and confused and when things reach their inevitable end, Randall makes sure his victim is aware enough to feel guilt about what’s just happened. “How could she ever forgive you?” the Brit muses as Jamie weeps. (Side note: Of all the gut-punches in this episode, for me, watching Heughan play Jamie’s realization and subsequent sorrow here was the worst.)

Back at the abbey, Jamie flatly notes that he couldn’t help his body’s reaction to Randall’s ministrations. “It felt so good not to be in pain,” he says flatly. Claire sobs and assures Jamie there’s nothing to forgive, but he’s not hearing it. “I cannot be your husband any longer, and I’ll not be anything less,” he vows, causing her to lament that they must be together — it’s the only thing that can explain all of the fantastic things that have happened to her/them since she first touched Craig na Dun. Completely undone, Claire as-close-to-ugly-cries-as-Balfe-can-get and says she’ll die if he does, then throws her arms around him. Little by little, Jamie finds himself able to touch her, eventually returning her hug. And when he summons Murtagh to slice Randall’s brand from his skin, you know that he’s on his way back to normal.

VIDEO Flesh and Bone: Trailer for Starz Ballet Drama Shows the Dark Side of Dance

ANCHORS AWEIGH (AND THE FRASERS FAR AWAY) | But those British are still likely to give chase, so Jamie, Claire and Murtagh say their farewells and board the Cristabel, bound for France. Pretty soon, Claire is puking over the side, and as Jamie gently teases her about it, he sounds more like himself than he has since he entered Wentworth.

They chat about the future. Claire raises the idea that, because they have the advantage of knowing what lies ahead in history, they might be able to stop the catastrophic stuff like the 1745 Jacobite Rising and its decimating Battle of Culloden. Oh, and “there’s something else,” she adds. “I’m pregnant.” So that’s why the normally stalwart Mrs. Fraser has been fainting and vomiting her way through the past two episodes! Jamie’s face is a revelation. “I’m verra happy indeed, Sassenach,” he assures her, and they kiss. Bon voyage until next season, Outlanders!

Now it’s your turn. Rate Outlander‘s finale via the poll below, hit the comments with your thoughts on the season — and don’t forget to check out my post mortem interview/Season 2 look-ahead chat with Moore!