Warning: The following contains spoilers for the series finale of The Leftovers. Proceed at your own risk.

As executive producer Damon Lindelof promised TVLine back in April, The Leftovers’ series finale Sunday did resolve the big Nora twist with which the Season 3 premiere concluded. But how did the episode do with regard to answering our other questions (and we had plenty!)? And did you find it as satisfying as portrayer Carrie Coon told us she did? Read on, then you can grade the ending in our poll below and discuss/debate in the comments.

‘SHE’S THE BRAVEST GIRL ON EARTH’ | As “The Book of Nora” began, Nora was challenged by the Swiss physicists to give a more believable testimonial than she had in Take 1 by including in it the names of her departed kids. “I’m leaving to be with my children, Erin and Jeremy,” she said, growing misty-eyed. “I’m ready to go now.” Not so fast. First, the doctors wanted to explain to her what was about to happen: After disrobing, she’d enter the event chamber, seal it from the inside, pull her knees to her chest, then hold her breath for 30 seconds while the machine — which looked like it could easily produce a Brundlefly — filled with liquid metal that, once radiated, would solidify around her. (All of which sounded a helluva lot scarier than the lie-in-a-crate test that Nora passed back in “G’Day Melbourne.”) While waiting for the all-clear to proceed, Nora did a Mad Lib with Matt, who admitted that he was scared — not for her but for himself. Scared of dying and, even more so, of living, because if he managed to pull through, he didn’t know how he’d ever again preach that he had answers when he now knew he had bupkis.

‘I LIKE TO GET A LITTLE LOST’ | When at last we arrived at the moment of truth, Nora — flashing back every step of the way to her last moments with her family — went through with it, and we cut to… white homing pigeons landing on her doppelgänger Sarah’s roof. Aha — it was a whole replay of the mind-bending scene from “The Book of Kevin” in which the look-alike told her nun friend that the name Kevin meant nothing to her. Only this time, we went further with the scene, allowing the nun to inform Sarah that a man by that name had come by with a photo of her. The nun hadn’t told him anything, she swore. But she also suspected he knew that she was lying. After Sarah biked home and found herself unable to not freak out, she hastily packed a bag and all of her pigeon money to fly the coop. Before she could leave, however, there was a knock at the door: an older Kevin, saying that they’d only met a couple of times back in Mapleton, like at that school dance. Still, he’d recognized her when she’d pedaled by during his Australian vacation, and since he’d always wished he’d asked her to dance all those years ago… well, he just had to invite her to the dance in town that evening. Knowing full well thanks to the nun that that wasn’t what happened, Sarah sent him away. OK, he said. But he’d be there if she changed her mind. 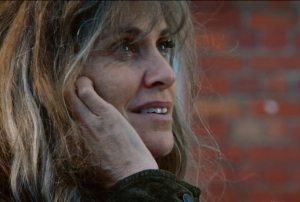 ‘SAME TIME NEXT WEEK?’ | If anyone didn’t know by this point that this was our Nora, not some Sarah, the matter was absolutely settled when she biked to a pay phone to call… Laurie. Wait, Laurie?!? (Guess she didn’t kill herself in “Certified” after all.) The shrink, a toddler in tow, promised that she hadn’t told and wouldn’t ever tell Kevin where she was. Yet, in spite of Nora’s insistence that she wanted her ex to leave her alone, Laurie suspected that what her patient really wanted was to go to that dance with him. In fact, she thought Nora had called her to get some kind of official OK to do so — which so irritated Nora that it had to be true. Back home, she took a bath and was so unnerved when the bathroom door stuck, trapping her inside, that she literally beat it down. (Clearly, she still had some feelings for Kevin!) Upon arriving at the dance, Nora was surprised to discover that it was actually a wedding. Had Kevin even been invited? Sure, he said. The bride and groom had met him at a hotel bar and insisted he come. And that was about it for small talk. Nora then pressed Kevin to reveal how he’d found her, and he continued to insist that, visiting his dad on holiday, he’d just happened to see her bicycling by. So he didn’t remember them getting their divorces on the same day and her inviting him to go to Miami with her? “You must have me confused with someone else,” he said, charming her. Because he for sure would have gone to Miami with her.

‘WILL YOU DANCE WITH ME?’ | If Kevin had been in Mapleton all this time, Nora suggested, he must know Matt. Yup, he did. He had been hoping that that woman he’d met at that dance would come to her brother’s well-attended funeral. (Other updates: Mary had wound up eulogizing the husband she’d dearly loved, Jill had gotten married and had a baby, and Tommy’s marriage… er, that hadn’t gone as well.) Had Kevin remarried? No, ”cause I’m still holding a candle for you,” he said, pointing out that, after his mom’s death, his dad had never remarried. “People hold candles, Nora.” Speaking of Kevin Sr., he was still alive and kicking at 91, prompting Nora to crack that, like his son, he must be immortal. Oh, but Kevin was quite mortal. He’d had a heart attack and now rocked a pacemaker, he revealed. When the bride popped by their table to collect the messages of love that guests were to write on tiny scraps of paper so that the nun’s white homing pigeons could spread them around the world, Kevin wouldn’t tell Nora what he’d put down. “That’s for me to know,” he said, “and some lonely Eskimo to find out.” Next, guests put their Mardi Gras beads around the neck of a goat, which would serve as an actual scapegoat, carrying into the desert the beads which represented their sins. Finally, Kevin asked Nora to dance, and as they held one another, it was like watching a broken heart being pieced back together. The moment affected them both deeply, yet, since he stuck to his story of how he’d found her, she pulled away. “I can’t do this,” she said, “because it’s not true”

‘THIS PIGEON LOVES YOU’ | Arriving home to find that her carrier pigeons hadn’t returned after the wedding, Nora biked off to confront the nun and found a, er, gentleman caller sneaking out of her place. The nun insisted that she hadn’t fed the birds anything different or done anything differently than she always did when Nora delivered her fine-feathered friends. Maybe, she suggested, they were just off delivering their messages of love. Naturally, Nora didn’t want to be sold that line of bull. But the nun wasn’t trying to sell her anything, she said. “It’s just a nicer story.” Headed back home, Nora wiped out when her bike rolled over some beads from the wedding, leading her to discover the poor goat stuck to a fence by more beads. After rescuing the distressed animal, she led it back to her place and gave it some veggies to eat instead of the bucket of notes from past bird runs that it seemed perfectly content to have as breakfast. As Nora sat down and read a few of the notes herself, Kevin showed up ready to tell her the truth: When Matt had told him she was gone, he hadn’t been able to believe it. Even after she was a no-show at her brother’s funeral, he couldn’t believe it. So every year since, he’d used his two weeks of vacation to return to the place where he’d lost her in hopes of finding her again. When he’d shown her picture to the nun, he’d seen it in her eyes — she knew Nora. Then, when at last he found her, he hadn’t known what to say, so he’d erased their past so that maybe they could have another chance. In response to this passionate outpouring, Nora offered Kevin tea. 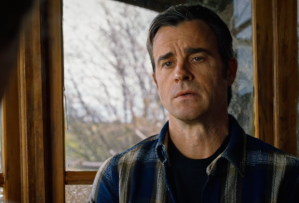 ‘I WAS A GHOST’ | Sitting down over tea, Nora had Kevin clarify which parts of his story had been true — his heart attack, Matt’s funeral, everything about his family. He wasn’t still in Mapleton, he was in Jarden “in our house,” with Laurie and John next door, Michael more or less running the church, and Erika visiting now and then. At the mention of Laurie, Nora admitted that she talked with her occasionally. But “don’t be mad at her” for not cluing him in, she added. “She’s my therapist.” Why didn’t Nora tell him herself where she was? Because, she replied, the last time they’d seen each other, he’d been right: “I needed to be with my kids.” Simple as that. She was never going to heal, so she needed a way to get them back. And she found it. She’d gone through to the other side, which had been exactly like this side, only without the trucks and the people. “I was in the [same] parking lot naked, curled up like a baby,” she recalled. At first, everything seemed so deserted, she wondered if there was no one anywhere on the other side. Eventually, she saw lights, and met a kind man and woman, who told her that seven years earlier, they’d been left behind. “That’s when I understood,” Nora said. “Over here, we lost some of them. But over there, they lost all of us.” Eventually, she made her way back to Mapleton and observed from a distance her children… and her husband… and his new wife. “They were all smiling. They were… happy,” she said. “In a world full of orphans, they still had each other.” As for her, she “had no place there.”

So, as the Swiss had jokingly suggested, Nora looked up the first person to use the teleporter, its inventor, and asked him to make another machine to send her back where she belonged. By and by, he did exactly that, and back to the other side, she came. Had she thought about Kevin in the interim? Of course. But she couldn’t contact him when she returned. Too much time had passed, she argued. It was too late. And, more importantly, she didn’t think he would believe what had happened. “I believe you,” he said. She then took his hand, they smiled at one another, her homing pigeons began returning, and — miracle of miracles — their story had not only a happy ending but the most romantic of endings. Now then, what did you think of their reunion and the series’ finale?

Grade the conclusion in the poll below, then hit the comments. Were there any questions left unanswered that are going to drive you crazy?