Warning: The following contains spoilers for Sunday’s heart-shredding episode of The Leftovers. If you want to be surprised, watch first, read later.

We should have known. There was too much talk about the most elegant way to kill oneself in Sunday’s beautiful episode of The Leftovers for everybody to survive the hour. Yet, maybe because we so fervently hope for the best for these characters, the suicide still came as a heart-tearing surprise. Who made their final exit on the anniversary of the Sudden Departure? Read on, tissues at hand…

‘TELL ME WHAT TO DO’ | As “Certified” began, we flashed back to Mapleton, where, three years after the Sudden Departure, Laurie was counseling the young mother whose baby had vanished in the opening moments of the series’ pilot. Or, rather, she was supposed to be counseling the young mother. Unfortunately, Laurie was so lost herself that the woman angrily noted that there were two members of the Guilty Remnant hanging around outside, and “if I ask them what to do, they’d at least write it down for me!” When the patient left, Laurie swallowed enough pills to stock a CVS, then changed her mind about committing suicide, threw up her medicine cabinet, donned an all-white ensemble and asked the GR members outside for guidance.

From there, we flashed to present-day Australia, where Laurie arrived at Grace’s house with a black eye and an apology for Kevin Sr. from Matt for the elder Garvey’s exclusion from the new New Testament. When she asked where her former husband was, “Pop” told her that he was off having a think, as he and the Kevin-is-Jesus gang had “asked him to die… again.” With John and Michael already at Casa Grace, Laurie said that “whatever is happening here, I want to be a part of it.” Next, we jumped — we did a lotta jumping in this episode! — to nighttime and Laurie spying with Nora and Matt on Drs. Aiden and Bekker (who, it turned out, were a couple). Amusingly, the reverend didn’t think they looked like physicists. “Shouldn’t they be wearing lab coats or something?” 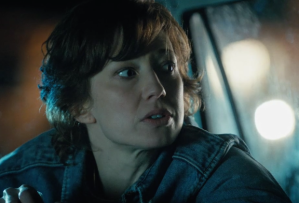 ‘TELL US WE’RE LUNATICS’ | Picking up back at Grace’s, Kevin Sr. was filling in Laurie on how “dicomf—-ingbobulated” he’d been when he arrived, especially after sampling the dog’s pain pills. Now the chief of police was wrapped in a tarp under the Playfords’ church, and the plan was for Kevin to be drowned so that he could cross over to the other side, then return having learned from Christopher Sunday the final song that Kevin Sr. had to sing to stop the Biblical flood. As for John, he believed that Evie would be in the hangout of the dead. So basically, everybody wanted something — a heart, a brain, courage. “Kevin’s in the Emerald City,” Laurie said. And yes, it was all crazy. But “these are crazy times,” she acknowledged. Therefore, when Kevin returned, she wouldn’t “jam them up.”

Cutting back to Laurie, Nora and Matt’s stakeout, Nora insisted that the docs’ invention wasn’t a suicide machine. Neither was she suicidal. “If I was going to kill myself, I’d just go scuba diving,” she said, because there were lots of ways to die down there. Plus, if, say, Laurie went that route, John, Tommy and Michael would be protected — they’d never realize it was a suicide. “Now that’s f—ing elegant,” Nora added. Throughout the scene, there seemed to be a lot of tension between the women, in particular when Nora asked what Laurie would say in a “reading” if she asked to speak with her children. Laurie and John didn’t do Departures, she reminded Nora, because their families didn’t want closure. “I want f—ing closure,” Nora countered. Which was why they were there. 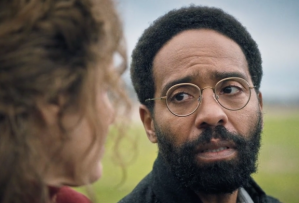 ‘STORM’S COMIN” | Back at Grace’s, Laurie’s catch-up with Kevin Sr. was interrupted by the arrival of a cop. While Grace showed him around her property, steering clear of the church, Laurie told John that she “can’t disclose” Nora’s whereabouts. She was also understandably ticked that her husband, after being told by Kevin where he was, left her behind. At least he had a goodish reason: He hadn’t brought her because she didn’t believe in Project Kevin. Could she disclose how she got her black eye, at least? From Nora, she said. But wasn’t she helping Nora? “I did help her,” Laurie replied. Just then, the duo saw Kevin Sr. whack the cop with a shovel. After bandaging the unconscious policeman’s head, Kevin Sr. drove off, intending to leave “Officer Koala Fart” far enough from civilization for them to see their mission through without further interference.

Once Kevin Sr. had left, John admitted to Laurie that, when they first went on a coffee date, he’d felt like he could tell her anything — except for the fact that, unlike Erika, he believed Evie might be alive. Furthermore, he didn’t want Kevin to ask Evie why she left, if he found her on the other side, he wanted his friend to bring his daughter a message: “I want her to know that she was loved.” Still, he invited his wife to “tell me we’ve gone too far… and we can go home and forget about all this.” She didn’t, though. She thought he needed to see it through. “You’re so close.” 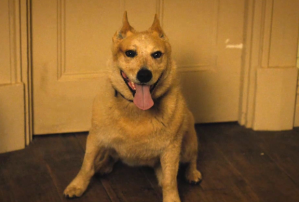 ‘I BORROWED YOUR PILLS’ | Jumping back to the stakeout, Laurie and Nora fought over Laurie’s lighter — the one that Jill had given her back in Season 1 — resulting in that accidental black eye. When the doctors at last left their home, the women and Matt tailed them. During the pursuit, Michael phoned Laurie to tell her where he and his father — and Kevin — were. Hearing that Kevin was with his dad, Nora remarked that, since tomorrow was such a big day, he — and they all — should be with family. When at last the trio arrived at their destination — and the machine actually looked believable — Nora, her intentions clear, told Laurie and Matt, “You can take the van. I don’t need it anymore.” Matt decided that instead, he’d stay with Nora — his family. Did Laurie have to, you know, tell everybody what Nora was doing? In response, the shrink asked for her cigarettes and told her, “Congratulations, Nora Durst, you are now officially my patient.” In that case, “Same time next week?” Nora asked. Oh, if only.

Rejoining the action at Grace’s, as Mrs. Playford prepared dinner, she revealed to Laurie that her children’s shoes had been missing when their bodies were found. They weren’t on them, or in the house, or nearby. So when Kevin crossed over, she was going to have him ask the kids where they’d put their shoes. When the gang sat down to “the Last Supper,” Kevin Sr. assigned them all roles. Would Laurie be Mary Magdalen? she asked. No, he replied, she was obviously doubting Thomas. After he recalled that, in Mapleton, she’d been the only person to say the voices he heard were really there — and, the next thing he’d known, he’d been institutionalized — she suggested that was actually Judas. He believed everyone was wrong about Jesus and had acted on that belief. And then killed himself, Michael noted. Just then, Kevin Sr. keeled over in his dinner, and Michael, then John, nodded off. “I’m sorry,” Laurie told her mate. But she’d dosed them all with the dog’s pain medication so that, when Kevin returned, she could speak to him alone. 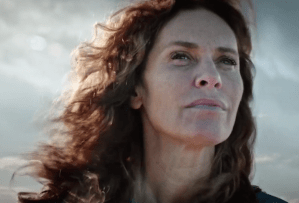 ‘ENJOY YOUR SOLITUDE’ | When Kevin showed up, Laurie admitted what she’d done and said that she thought she’d helped Nora find what she was looking for. Was she going to talk Kevin out of dying again? No, she just wanted to say goodbye. After an alternately humorous and heartfelt game of true confessions — once upon a time, he’d killed Jill’s hamster; she’d been 16 weeks pregnant on the day of the Sudden Departure — she asked if he was scared. The last time he’d crossed over, he remembered, “Maybe I was dead, but I had never felt so alive.” If he wasn’t scared, then neither would she be. Nonetheless, she couldn’t stay for his death and resurrection. As she left, she told him he could keep Jill’s lighter — the one with the “Don’t forget me” engraving — and he asked if Nora was gone. “We’re all gone,” she responded. The next day, Laurie took one last call from Jill and Tom, then plunged into the ocean… scuba-diving.

Which scene wrecked you more — Nora’s recollection of that baseball game she and Matt had been taken to after their parents’ deaths, or Kevin and Laurie’s goodbye? Hit the comments.