By the time Sunday’s episode of The Leftovers was finished, the apocalypse couldn’t come soon enough for Kevin, Nora and anyone not enamored of a-ha. He chased a ghost, she chased, in a way, a couple of her own, “Take On Me” lodged itself in our heads anew, and, in the end, there was a sudden departure of the lowercase S and D variety that I don’t think any of us saw coming. Who split? Read on.

‘ANYTHING ELSE YOU WANT TO TELL ME ABOUT?’ | No sooner had Kevin and Nora made it through airport security in “G’Day Melbourne” than he insisted on knowing why she’d used her global-entry pass instead of wait an extra five minutes in line and stay with him. Turned out, she had duct-taped $20,000 around her waist since it was illegal to take more than 10k out of the country and it tellingly hadn’t occurred to her to ask her boyfriend to hold half. After the couple had sex in the restroom where Kevin had untaped Nora, they boarded, and she explained that no one in any of the testimonials she’d watched was around anymore. Therefore, she was sure the Swiss scientists were scam artists who were just performing really costly cremations on unwitting victims. Wasn’t she way out of her DSD jurisdiction? Technically, yes. And what would she say if they asked why she’d brought along her significant other? The two of them are in a toxic, codependent relationship, she answered perhaps a little too quickly, and Kevin had come to see her off.

Upon checking in to their hotel room in Australia, Nora asked if Kevin was going to look up his father while they were Down Under. No, he replied. He’d come to be with her. And besides, his father hadn’t even told him where he was. When Nora noticed that Kevin had brought Matt’s book, he said he’d read it on the plane while she was asleep. Whether he really had, he was still able to answer correctly when she quizzed him about what he’d done once he had the little girl (Young Patti) on the edge of the well. (Hilariously, she noted that “Matt capitalizes your H’s” and wondered, “Where does Matt come up with this stuff?”) Just then, the phone rang. Nora was to take a bus across the street to the last stop to meet her party. Kevin wanted to go with her, but she insisted on going alone. “Just take your nap,” she said. While she ran downstairs, he discovered that he couldn’t turn off the TV in the room and called the front desk clerk, who said he’d reset it remotely. Before the TV was shut off, Kevin heard on G’Day Melbourne that two Kevins were missing — one, the Kevin that Grace had drowned; the other, his father. And, in the background, when the hosts stood before a Today style glass window showing fans standing outside, he saw… holy crap! Evie! “Can you hear me?” he asked. Naturally, that was the moment at which the TV was reset. Since it would take a few minutes to reboot, Kevin hauled ass to the studio, where the show was being broadcast live. 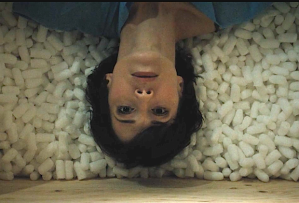 ‘IT’S A LITTLE BIT CREEPY, NO?’ | Meanwhile, Nora nearly missed her bus because she agreed to hold the baby of a young woman interviewing for a job at a nearby cafe. When at last Nora arrived at her destination, a desolate warehouse, she found Drs. Aiden and Bekker playing Name That Tune on a piano. (The tune in question: “Take On Me,” of course.) Before the three really talked, the docs wanted their associate Bernard to perform a medical exam, which included placing Nora in a crate full of packing peanuts to simulate the intense period of confinement she’d have to endure in the event chamber. Passing the test with flying colors, Nora then got to have a little Q&A with the docs. Why hadn’t they used the machine to go through? she wanted to know. Bekker, for her part, didn’t like the odds. They knew they were sending people to the same place as the departed but had no idea whether it was a sustainable environment. And why was Bekker always giving Nora side-eye? The doc predicted she’d get cold feet. Then it was their turn to question Nora. But they had no interest in why Kevin was there. They wanted to know: If twins were born, one of whom would grow up to cure cancer but only if the other one died right then, would she nod her head to green-light the baby’s quick and painless killing? Since kids die every day, and this would cure cancer, “Of course I nod,” said Nora. In response, the docs crushed her by saying they would proceed no further. And no, they didn’t want her money. 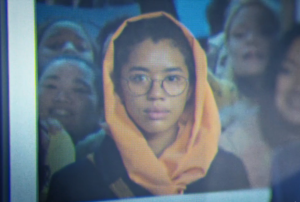 ‘I AM EVIE MURPHY’ | Outside the G’Day Melbourne studio, Kevin spotted Evie and finally got her to speak with him in a spectacularly colorful alley. What does she want? he asked. Did Patti send her? When she replied, “Who is Patti?” it was with a Middle Eastern accent. Since Kevin seemed frenzied and Evie seemed scared, a man approached to see if she was OK. Although relieved that someone besides himself could see Evie, Kevin really wanted the guy to shove off. After being told that the girl’s name was Daniah Moabizzi and snapping her picture with his cell, Kevin was head-butted by the good Samaritan who’d come to the young woman’s aid. Next thing we knew, Kevin was calling Laurie and having her hunt down Daniah on the Web, like she does the deceased when she and John are doing “readings.” After Kevin sent Laurie the photo he took to prove that Daniah was really Evie, she made the mistake of asking if he’d seen her at the library. Though she warned him not to scare off Evie by approaching her, he naturally made a beeline for the place his ex had accidentally mentioned discovering through her Web search the girl might be. At first, it looked like Kevin was only going to get himself kicked out of the library. But then Daniah said she knew him, took him to a private room and admitted that she was Evie, she’d started a new life, and she didn’t want him to tell anyone he’d seen her. But if she was Evie, why was she still using the accent? At that, the girl started to pray in a foreign tongue. “I have compassion for you,” she said, “because you are ill.” She added that “she” had told her to say she was Evie to make Kevin go away. She who? Laurie!

‘THIS ISN’T REAL’ | Furious, Kevin phoned his former wife, who ultimately made him look again at the picture he’d sent her. It wasn’t Evie. Not even close. Laurie suspected that Kevin had called her and not Nora or anyone else, because he felt she could help him. She’d initially gone along with his delusion, because, as she’d told him before, one should never tell somebody who’s having a psychotic break that they are having a psychotic break; they might harm themselves. Furthermore, she theorized that he’d chosen Evie to “see” because he understood on some level why she had left her family and escaped. “I think a part of you wants to escape,” too, she said. Why else would Jarden’s chief of police be in Australia a week before the anniversary of the Sudden Departure? When he said he was there for Nora, Laurie asked if they were, you know… OK? Angry, Kevin told her to “ask John about the f—ing book he wrote about me!” and hung up. 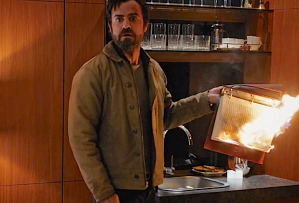 ‘WHAT DO YOU WANT TO TALK ABOUT?’ | Back at the hotel, a manic Nora was calling her boss at the DSD to report the Swiss as frauds when Kevin came in clearly worse for wear. He could tell her anything, she assured him. Only no, he couldn’t, he reminded her. The last time he had, he’d awakened handcuffed to their bed, and she’d been gone. In no time, the couple was fighting. She was pissed that he could tell Laurie who he’d seen but not her, and suggested that he actually liked that Matt had written a book about him. To prove that he didn’t like it one bit, Kevin set the book on fire. Now, he said, they didn’t have to talk about it again — their favorite pastime: not talking about anything. When finally they got down to what they really wanted to discuss, she asked why he hadn’t kept her from giving Lily back to Christine and accused him of being relieved she was gone. In turn, he accused her of not wanting to have a baby with him, because if she did, she couldn’t play the victim anymore. When she insisted that she didn’t want anyone to feel sorry for her, he asked when she was going to get over losing her kids. “My kids are not dead,” she clarified, “they are just gone.” Here, Kevin delivered possibly the hour’s meanest line — “Then you should go be with them” — before grabbing his bag and leaving a devastated Nora behind. Downstairs, Kevin couldn’t get a cab because of an explosion. But it didn’t matter for long, because up rolled Kevin Sr. and Grace. He’d seen his son on TV, and now, “here you goddamn are.” Are you here alone? Kevin Sr. asked. Yes, Kevin answered. Well, he wasn’t anymore!

What did you think of “G’Day Melbourne”? How harrowing was that Kevin/Nora fight? Do you think the Swiss were legit? If so, where do you think they were sending people? Hit the comments.