The following story contains spoilers from The Leftovers‘ third-season premiere. If you haven’t watched yet, depart yourself suddenly!

Oh, The Leftovers, you twisty little bastard, you.

In the closing seconds of the inscrutably divine HBO drama’s final-season premiere (read our recap here), the action shifted from Texas to Australia, where we were introduced to a gray-haired woman named Sarah who was the spitting image of Carrie Coon’s Nora (just a decade or two her senior). When a nun asked Nora’s doppelgänger if she’s ever heard of a dude named Kevin, she said no.

The narrative turn packed a helluva punch, and that’s saying something considering whiplash-causing curveballs are steeped in The Leftovers‘ DNA. But while some of the series’ larger mysteries, most notably the whereabouts of The Departed, are destined to remain unanswered, exec producer Damon Lindelof 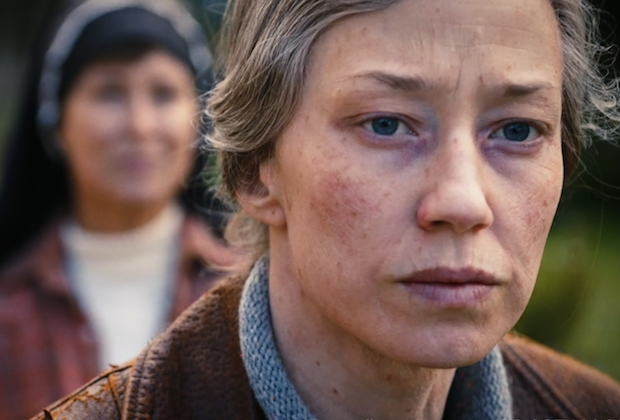 assures me that the Nora/Sarah humdinger will be explained before the show signs off for good on June 4. In fact, Lindelof reveals that the premiere’s climactic scene is actually a quasi-spoiler from the finale.

“One of the things we wanted to do in choosing to end the first episode the way that we did was create a little bit of comfort for the audience and show them where we were going,” Lindelof tells TVLine. “There’s no desire to actively troll the audience. So our intention of ending Episode 1 the way that we did was to alleviate a little of the tension of, ‘How is the series going to end?’ by beginning the ending in that very first episode.”

Lindelof adds, “I can say without spoiling anything that, yes, we will be resolving that mysterious ending of Episode 1. It’s not just hanging out there to never be resolved. We will be giving it a greater and broader context later in the season.”

Coon first got an inkling of Nora 2.0 shortly after shooting began on the eight-episode farewell season (the Sarah scenes were shot out of sequence and towards the end of production). “I heard that we had to start working on a makeup test, but I didn’t know why and they wouldn’t tell me why,” she recalls. “I knew about the [Sarah] reveal from reading the script, but I didn’t know who she was, what she was doing there, what the hell was going on with the pigeons and why she was old. But Damon and I have always had a relationship wherein we don’t talk about everything, so we didn’t have a big conversation about it.”

And when Coon did learn what it all meant, she says she was pleased. Generally speaking, the finale “gets very personal,” Coon teases. “And to me that is satisfying. And because Nora got to be a part of the final season and the final episode, I was personally very satisfied. So, hopefully, my satisfaction is very meaningful to fans out in the world.”