Warning: The following contains spoilers for Sunday’s Season 3 premiere of The Leftovers. If you’ve yet to watch, you might want to make a Sudden Departure from this page.

Heaven help him. In The Leftovers’ stunning third and final season premiere, Kevin learned that not only was he seen by Matt as a kind of Jesus 2.0, but the reverend was secretly writing a new gospel to that effect. And miraculously, neither of those twists was the biggest shock in “The Book of Kevin.” What was? Read on and find out…

’14 DAYS TO GO’ | The hour began with a vignette that brought to mind the Season 2 premiere‘s cave mom. In it, we flashed back to 1844, where a family of three over and over dressed in white a la the Guilty Remnant and climbed onto a rooftop in preparation for a Rapture predicted by a preacher taking his cues from notes delivered by carrier pigeons. (Got all that?) Eventually, the patriarch of the family lost his faith and refused to let the son participate in the folly anymore. And, when a third time, the mother wasn’t taken, she climbed down to go to sleep in the church among her fellow believers… a shot that smoothly transitioned into the GR slumbering in Jarden’s visitor center. When Evie awakened, she asked Meg what they were waiting for. In response, the GR leader talked about Siegfried and Roy, and how it had only been a matter of time before one of their tigers bit their face off. Next thing we knew, the military was dropping a bomb on the visitors center, the insanity of Evie’s actions (maybe) resonating at the last second in her eyes.

Three years later, Kevin was Jarden’s chief of police; Tom, a deputy; and the town was by then open to the public — wristbands were no longer needed. However, with October 14 fast approaching, “Miracle” still attracted the kind of crazies who’d blow up an inflatable Gary Busey to let him know where to land when he returned from heaven on the anniversary of the Sudden Departure. Kevin seemed to have the kookiness well in hand, but Matt for sure wasn’t helping. After finding a flier warning that there were “14 days to go” till the 14th — and giving the address of Matt’s church — Kevin listened in as he gave a vaguely rabble-rousing sermon. Later, he caught Michael hiding you-know-what on his computer — “Watching porn?” — and accused Matt of distributing the fliers. C’mon, “no one loves handing out fliers more than you do,” Kevin noted. And though the reverend insisted that his sermon had been innocent, his pal summed it up nicely: “You said nothing’s gonna happen on the 14th unless everything happens on the 14th… Tone it down.” 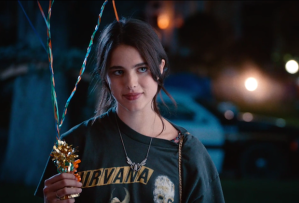 ‘WHAT YOU’RE THINKING IS HAPPENING… ISN’T’ | At the police station, Kevin warned his cops that they were expecting up to 10,000 “pilgrims” before the 14th. If a suspect asked for a lawyer, they were to get one. But, per Agent Durst from the DSD, if they used “the D word,” they were to get her. Of note: Nora and Kevin seemed as happy and together as ever they’d been, she was insisting on throwing Tom a surprise party even though the birthday boy knew about it, and she was sporting a cast on her arm (which seemed like nothing except that nothing on this show is ever actually nothing). Once she left, Kevin found in his office… Dean. “I tried to keep you out of this,” he said, “but our prey, previously unsophisticated and killable, has adapted.” Translation: Dean believed that the mad dogs he and Kevin had hunted in Mapleton had begun taking human form in order to ultimately get their hands — er, paws — on the nuclear button. His proof: a peanut butter and jelly sandwich ordered by a politician at a fundraiser Dean helped cater. Dogs love peanut butter, he noted. So he wanted the sandwich tested for canine DNA. Kevin’s response: in essence, yeah, no.

Later, we learned that Laurie was now offering therapy sessions to Jarden’s residents by having her lover John (!) pretend to do palm-print readings on them while she told him what to say through his earpiece. Weird, but it worked. As she told Kevin, “They won’t believe it unless it’s horse s—.” Once the session was done, Kevin asked his ex if she’d talk to Dean, who was so clearly, er, troubled. That night, while Tom’s surprise birthday party might not have surprised him, he was shocked that Jill drove to Jarden from college to celebrate. “Is this the house where all the f—ed-up people live?” she playfully asked her dad when he opened the door. As the bash wound down, Matt, John and Kevin recalled where they were at Tom’s age. Kevin sweetly remembered that, at 25, his police cruiser was hit by a woman whose 2-year-old remained, in spite of the shake-up, as calm as could be — Laurie and Tom. As Jill headed back to school, she asked Kevin if Nora ever talked about Lily… Holy crap! Where is Lily?!? No, Nora didn’t talk about the little girl she and Kevin had adopted and who was now nowhere to be seen. “Should I try to get her to?” 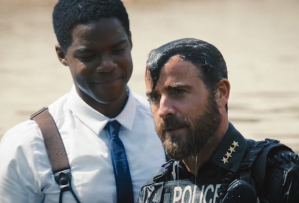 ‘YOU CHANGED, YOU SON OF A BITCH!’ | At bedtime, Kevin mentioned to Nora that he’d watched her at the party with Matt and Mary’s son, Noah. And though the couple began to make love, and Lily’s name was never mentioned, she was clearly the elephant in the room. The following morning, after Nora went out, Kevin duct-taped a plastic bag to his head as if trying to asphyxiate himself. (To get to the other side to reach Lily? Just guessing there… ) Next thing we knew, he was leaving the house right as rain, and being called to the spring where Matt was performing baptisms. Kids protesting the drone strike on the GR three years ago — and wearing Evie T-shirts — had poisoned the water! By the time Kevin arrived, things were getting seriously ugly — there was even stone-casting. As bedlam erupted, Kevin jumped into the spring and deduced that the water hadn’t been poisoned at all, it was just a prank. Taking advantage of the situation, Michael insisted that Kevin be baptized on the spot. “That didn’t count,” Garvey whispered afterward.

Driving back into town, Tom was arguing that the protesters had been telling the truth, and Kevin was saying that the explosion that had killed Meg, Evie and more had been the result of a gas leak and a cigarette being lit by a GR member. “That’s the story.” That’s BS, Tom maintained. How had Kevin known it was safe to jump into the “poisoned” spring? He’d just known, he insisted. Also BS, Tom said. Just then, Dean started shooting at them. After the police cruiser crashed, Dean, yelling that Kevin had changed, was about to kill him when… blam! Tom shot the gunman. Later, before Dean’s body could be taken away, a dog ran up and stole his peanut-butter evidence. (Really?) At home, Kevin found Nora visiting with Mary, who revealed that, unable to take Matt’s zealousness — he wouldn’t even let her cross the city limits for fear that she’d be rendered comatose again — she was moving back to Mapleton with Noah. Oh, and Matt’s writing a book about Kevin. “He thinks the New Testament is getting old,” she explained, adding that the reverend had gotten pretty excited when Kevin rose from the dead. 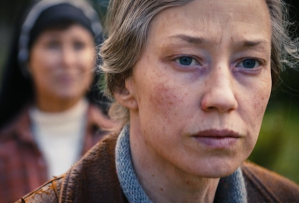 ‘I’M NOT F—-ING JESUS!’ | Immediately, Kevin made a beeline for the church, where Matt refused to give him his only copy of the book (written by hand!) and argued that everything in it was true. “It all happened,” he said. “It’s still happening!” When John entered, Kevin was stunned to learn that he believed in this “gospel” as much as Michael did. After all, John had shot Kevin, he pointed out — and then Garvey had walked back to town. Kevin did try to drown himself — and was saved by an earthquake. And Kevin drank poison and came back, Michael added. Face it, “you can’t die here in Miracle,” Matt suggested. When Kevin protested that he wasn’t Jesus, Matt made the mistake of cracking a joke: “I’m not saying you are [Jesus], but the beard looks good on you.” At that, Kevin attacked his friend, and finally, Matt handed over the book. Strangely, Kevin couldn’t bring himself to burn it. As he looked up at the sky — “13 days to go” being written by a plane — the camera followed a bird from the clouds above Jarden to… Australia, where white carrier-pigeon-type birds (doves?) landed and were put in cages by a gray-haired woman for delivery to a nun at the community garden. “Sarah,” the nun said, “does the name Kevin mean anything to you?” No, replied the woman… and when we saw her face, WTF?!? She was a dead ringer for an older Nora.

What did you think of “The Book of Kevin”? Theories about Nora’s lookalike? Dog people? Lily’s whereabouts? Are Meg and Evie really dead? Grade the episode below, then hit the comments.