Need to catch up? Check out last week’s Nashville recap.

Nashville’s Rayna Jaymes was such a force of nature, it takes not one, not two but a whole recording booth full of people to replace her.

(On her final album, at least.)

This week’s episode of the CMT drama — its midseason finale — allows for some closure following Rayna’s unexpected death two episodes back; where last week’s hour was all about the surreal numbness that permeates immediately following a huge loss, “Fire and Rain” sets the series back in its groove.

The question of how (or whether) Rayna’s final songs will be released is addressed. The Exes line up a tour. Maddie has a taste of what her career might be like. And Scarlett ends the hour with quite the bombshell:

She’s pregnant (!). And that’s only half of it, so prepare to clutch your Minnie Pearls. Read on for the episode’s highlights.

BACK TO WORK | Rayna’s family is doing the thing that families do in the wake of a death: numbly stumbling along, going through the motions of banal activities like breakfast, waiting to feel better again. Deacon’s not quite as checked-out as he was in the previous episode; he balks when Scarlett hesitates to agree to a tour, gruffly-yet-tacitly suggesting that he doesn’t need her to stick around to mother him and the girls. And he’s irate when Zach suggests that they need to release Rayna’s final album pronto — even Bucky’s reasoning that they need cash, and fast, to pay for Wheelin’ Dealin’ Records, as well as the easy-out clause means Zach and his money could walk any day, doesn’t move Deke one inch.

Luckily, Rayna recorded her scratch vocals for all of the songs before she died. So all that’s left is for Deacon to lay down his vocals, then for some production magic to whip the whole thing into sellable shape. And that’ll happen…? “Never,” Deacon vows, countering Zach’s argument that he owes it to Big Red’s fans by saying, “The only person I owe anything to is Rayna.”

Also, because it seems important to raise this point early: Isn’t Zach richer than God? Couldn’t he just float Highway 65 until the album sales start rolling in?

JU STEPS IN | Meanwhile, Maddie and Scarlett have been steadfastly refusing the myriad media requests that have come in since Mads, Daphne and Deacon performed “Sanctuary” at the CMT Awards. And when Juliette happens to be around as Scarlett hangs up on “one of the Jimmys” — Fallon? Kimmel? The world may never know! — she is incensed.

“The girl is having a moment, whether it’s good timing or bad,” Juliette reasons, but Scarlett is very frowny/judgy about Ju’s offer to chaperone Maddie during a media tour of New York. “I am a different person than whatever that look you just gave me implied,” Juliette quips, and GUYS, I LOVE HOW SELF-AWARE JULIETTE IS THIS SEASON. Ahem. Sorry, I just get really excited about character growth.

After talking it over with Deacon, Maddie decides that she will do a few talk shows, so she and Juliette fly to the Big Apple. First up is The Daily Show, where host Trevor Noah is incredibly nice to a very uncomfortable Maddie. (Side note: I was going to snark about how odd it seems to hear Noah play himself as a Mads fan, but then I remembered when we were stuck with Good Morning America or bust for every. single. media. thing. and I decided to just chill.)

“Why did they want Maddie and not both of us?”  Daphne asks Scarlett after they watch at home, and Scar’s answer — ”because the world is obsessed with beautiful young women, which is good for you, because you are fast becoming one” —  is maybe not the most graceful way of explaining it?

DEACON’S DARK HOUR | In case you’re wondering what Deacon is up to, he’s holed up in the bedroom, sniffing Rayna’s sweaters and trawling through her trove of old videos, journals and memorabilia. Nashville apparently has finally given up on trying to CGI-back the years and/or shoot Connie Britton and Charles Esten through gauze/scrim/trees or whatever they did the last time we were supposed to be seeing Deke and Rayna in their younger years. This time, different actors play the pair in 1991, and we watch a shaky amateur video of them kissing and goofing around in the recording studio. (For what it’s worth, I approve of the change.)

As Deacon digs through the memories, he unearths video of one of Maddie’s first birthday parties, and watches Rayna on their wedding day as he reads her thoughts about finally, FINALLY becoming his wife. Then he cues up the behind-the-scenes footage that Zach’s camera guy shot for the making-of-the-duets-album video. It’s all too much for the cowboy, who has a full-body breakdown and winds up crouching and sobbing in the corner of the room. I feel for you, Deacon, I really do, but you’ll forgive me for a sec if I’m distracted by the shots of you and Rayna going at it like teenagers against the bowling alley wall a few episodes back… which means Camera Guy Gene succeeded in stalking you like a creepy creepster who creeps. Eew. (Does this revelation affect the hotness of the clip, though? No, it does not.) 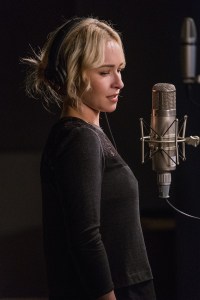 STRIKING WHILE THE IRON IS HOT (SAD, BUT HOT)  | In New York, Maddie is more comfortable during a stop at Harry!. Unfortunately, that means that she speaks without thinking, which leads her to glibly blurt that “I’m not all like, ‘Thanks, Mom, for all the attention I’m getting” in the aftermath of Rayna’s death.

She’s horrified to see that entertainment blogs are running with the “thanks, Mom,” quote, and she cries to Scarlett on the phone the next morning that she wants to come home. Scarlett very quickly says that her cousin shouldn’t care what Juliette thinks, because “Look at her life, look at some of the choices she’s made.” Oh, I’m sorry, Scarlett, you put on a strand of pearls and suddenly you’re the Queen of Perfect Decision-Making? Because I’m standing here with Damien and Liam and Caleb, and they’re all making faces similar to the one you shot at Juliette earlier in the episode.

So Juliette cancels the Today appearance, but once they’re back in Nashville, she makes it clear “that I am disappointed by your lack of professionalism in New York,” adding that if the teen doesn’t take advantage of the opportunity afforded her by Rayna’s death, “you will regret it for the rest of your life.” And when Scarlett vehemently objects, Ju wheels on her, asking, “How would you know? Just because you’re afraid of success?” OUCH. Also? Kinda TRUE.

They eventually all make nice, and Juliette goes a step farther by offering to guide Maddie’s career, because “I want to take you all the way to the top.” Ooh, I like where this is going…

OOPS!  | Meanwhile, Avery is torn up about not being able to help Deacon when he needs it most. So Avery organizes everyone — Gunnar, Scarlett, Juliette, Will and the girls — and assembles them all in Rayna’s home studio. When Deacon finds them there, they reveal that they’re going to help him finish the album by singing some of the tracks with Rayna, “in a way she would’ve loved,” Avery says gently.

It’s a feel-good way to end the episode, and seeing/hearing everyone pitch in finally gets Deacon to the point where he can record some vocals of his own. A casual listening party at Highway 65 indicates that Zach and Bucky are pleased with the result, which is great and all… but I’m a jerk, because all I keep wondering is: Are Rayna’s fans really going to be into this? Especially if they had any indication that the original concept was an entire album of Rayna and Deacon duets? In short: Is this album going to sell?

But don’t ponder that too deeply, because we’ve got bigger problems in the immediate future. After everyone leaves Rayna’s record company in a good mood, Scarlett hangs back to tell Gunnar that she will go on tour with him. But there’s one thing: “I’m pregnant.” And nope, she doesn’t know whether he or video director Damien is the father. See ya in a few months, y’all!

Now it’s your turn. What did you think of the midseason finale? Sound off in the comments!