It’s all over but the cryin’… but there’s a lot of cryin’ left to do in this week’s Nashville.

That’s to be expected, of course: While we’ve had a week to process Rayna’s unexpected death thanks to complications from a car accident, her loved ones have had just a few days. So when we check back into Music City, it’s a somber place, indeed. Deacon’s a mess. The girls aren’t much better. And the unholy alliance of Teddy and Tandy whirl into town to cause more potential heartache for Rayna’s grieving immediate family.

Let’s take a look at what goes down in “I’ll Fly Away.”

RAIN FOR RAYNA | The hour begins during Rayna’s graveside service, where Deacon is reading W.H. Auden’s “Funeral Blues” aloud in the pouring rain. He’s flanked by Maddie and Daphne; Tandy, Gunnar, Scarlett, Will, Bucky, Avery, Juliette (oh honey, are Bjork buns really the most appropriate funeral hairdo? Or is that just the grief talking?) and Clay are all there, too. Teddy’s there, too, let out of the clink for three days’ bereavement leave. For those of you who might be new to the show this season and are unacquainted with Rayna’s ex-husband, allow me to bring you up to speed: He married Rayna when she was pregnant with Deacon’s kid, did some shady things with money, covered them up, became mayor, got involved with a few really unsavory women (aw, remember Ol’ Leopard Panties?), had fisticuffs with Deacon, and eventually went to federal prison for embezzlement and other assorted ridiculousness.

Deacon holds it together pretty well, considering, but he’s incapable of dealing with anyone during the post-ceremony reception at Rayna’s house. (And I’m incapable of not noticing that majestic entryway — have we ever seen it before?) He staggers up to the bedroom and stays there for the duration of the day.

GRIEF TALKING | And that’s probably for the best, because Zach is downstairs doing his darndest to be the most socially awkward person at an inherently socially awkward event. He pulls out his laptop and plays some of the behind-the-scenes video his guy shot; seeing Ray alive and happy literally sends Bucky running from the room in tears. Then Zach takes it upon himself to be the first to raise a toast to his fallen bestie (of all of a few weeks), saying that he “always felt a connection to her” WHICH IS EXACTLY WHAT HER STALKER SAID. It’s a good thing that Zach has Will nearby (“You meant well,” Lexington says by way of smoothing the rough moment) and Cadence in proximity, because a cute kid goes a long way toward easing lots of social gaffes.

Glenn grabs a quiet moment with Juliette to let her know that the CMT awards are looking to have Faith Hill perform a tribute to Rayna, but Ju is adamant that she do it instead, declaring she is ” absolutely damn well enough!” to perform. And when the network agrees, Juliette is overjoyed… for a moment, until she sees herself in a full-length mirror, limping down the hallway. (We’ll get back to this in a moment.)

GO AWAY, TANDY | Scarlett is super helpful — a phrase I never thought I’d write in relation to this show — and makes sure Tandy is supported and the girls are comforted and Deacon is as comfortable as possible. Of course, once the taking-care-of-everyone calms down a bit, she falls apart, too, sobbing in a hallway until Gunnar finds her and compiles with her sad request to “Please hold onto me.”

By the end of the evening, Rayna’s place looks like the site of the saddest house party ever: guests passed out on couches (Side note: Poor Bucky!), empty cups and plates all over, and Maddie — who wanted to lean on Clay but was disappointed when he couldn’t emotionally step up — tucking Deacon into bed. “I don’t know who I am without her,” Deke says. “You’re my dad,” Maddie replies, sitting with him, rubbing his back and seeming far more mature than she ever has before.

After most of the guests have left, Teddy and Tandy have a conversation in which she notes that Deacon is “barely functioning” and suggests that she and Rayna’s ex will need to step up in the days to come. And when they — as well as Scarlett and a very not-into-the-proceedings Deacon — meet with the lawyer the next day, the lawyer reveals that Rayna hadn’t determined who would have guardianship of her girls and her business (and the two are tied) in the event of her death.

The basics: Legally, both Daphne and Maddie are Teddy’s kids, because he adopted Maddie after she was born. And that can be contested, but it’ll mean a messy court battle in which the girls will have to testify. Deacon comes out of his fog for the first time when Teddy starts talking about how he’ll be out of jail in three months and will be around more in order to take care of things. And Tandy is on board with that, because she’s got millions invested in Highway 65 (oh right! Who else forgot about that little detail?), and she doesn’t think Deke is up to the task of managing the business and fathering two girls. (Side note: I kind of hate Tandy in this episode.)

A point I’d like to raise: Isn’t Maddie legally emancipated? Doesn’t that mean that she’s exempt from this custody war? (Anyone with actual legal expertise, feel free to chime in down in the comments. You can bill us later.)

DON’T DO IT, DEACON! | The next day, Will and Zach have a business meeting at an art museum. Except, “This isn’t a business meeting,” Zach notes, and Will sheepishly replies, “I know.” They wind up kissing against a column, then Zach brings up the inherent conundrum of life: You know you’re going to die, but you’ve got to keep going regardless. Then they hold hands. Maybe this is the grief talking, but I don’t hate this pairing, y’all.

Back at Rayna’s, Teddy and Deacon almost come to blows in the kitchen. It’s ugly. Later, Deke overhears Daphne crying to Scarlett that “either way I lose” if she has to choose between the two men. And by the time everyone arrives at Bridgestone Arena for the CMT awards, Deacon has decided to be the bigger man: He pulls Teddy aside and tells him that he won’t contest Teddy’s guardianship, if only to save the girls from a prolonged and painful fight. Noooooo! 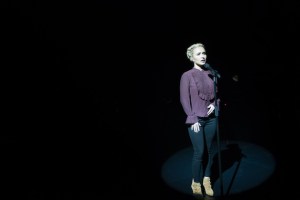 Will opens the awards ceremony by performing “By Your Side” while footage of Rayna flashes on the screens behind him. While that’s happening, Juliette — whom earlier we saw having a hard time in rehearsal — summons Maddie to her dressing room and suggests that Rayna’s older daughter take Ju’s place and sing during the show.

Maddie protests that her mother would be so happy to know that Juliette was singing her song, “Sanctuary,” as part of the tribute. “No she wouldn’t,” Ju replies (ha!), and the Line Reading of the Night Award goes to Hayden Panettiere for that one. Brilliant. Maddie still says no… until Juliette goes out on stage and starts talking about listening to Rayna’s music on the radio in the trailer park when she was growing up, and then the teen has a change of heart.

Juliette can somehow sense that, so she introduces Maddie, who walks out on stage. No rehearsal? No in-ear monitors? A super emotionally charged moment? WHAT COULD GO WRONG?

TOEPICK TO THE HEART! | At first, Maddie does really well. But then everything hits her and she just can’t make it through the quiet ballad. Deacon and Daphne rush up on stage to hug her, which makes the crowd erupt in applause. And then little Daphne steps up to the mic and continues her mom’s tune, a capella. Deke grabs another microphone and joins in, and pretty soon the band and Maddie are back, too. The audience is on its feet in moments, Juliette is in tears on the side of the stage, and the whole thing is enough to sway Teddy to do the right thing.

After Deacon and the girls exit the stage, Teddy meets him in the wings, calling his adversary “a good father” and adding, “I’d be obliged if you watched over them, be their guardian for now.” Deke gladly accepts, and the trio goes back out for a curtain call. The clapping? The tears? The triumphant reversal of something that seemed doomed just moments before? This is just like the end of The Cutting Edge, only sadder! And who would’ve thought Teddy, of all people, would land the emotional Pamchenko?

Now it’s your turn: What did you think of the episode? Sound off in the comments!