Warning: This post contains major spoilers from this week’s Nashville. And if you need to catch up, check out the previous Nashville recap here.

Connie Britton is, indeed, leaving Nashville. And this week’s episode chronicles in heartbreaking detail the tumultuous final hours of Rayna Jaymes’ life. (As it turns out, the hour isn’t Britton’s last with the show. More on that here.)

“If Tomorrow Never Comes” is a great — perhaps the best — episode of the country-music series. It is also the most heartbreaking. I have watched a lot of screeners during my time at TVLine, but this installment of Nashville was the first one that made me cry at my desk. And I won’t be able to hear “A Life That’s Good” the same way again.

PHEW! | From Rayna’s point of view, we experience her being wheeled into the emergency room. It’s not good: The car crash at the end of the previous episode left her with a crushed pelvis and hip and a broken leg. While Deacon speeds to the hospital, he calls Maddie and tells her to get there ASAP; Gunnar phones Scarlett, who’s still in bed with Damien, and relays the message that Deke needs her to pick up Daphne from choir practice at school.

Rayna is looking pretty beat-up (and understandably so) when Deacon arrives; she’s on a lot of morphine, and she needs surgery soon. But she wakes up and gives him a sheepish smile, asking, “Can you believe this?” The officer driving her car is fine, and Ray doesn’t remember much about the accident. But by the time Scarlett, Daphne and Maddie arrive at the hospital, Rayna is making loopy jokes — “What is it with me and car accidents?” — and teasing the doctor who wants to play her music during the operation to choose the playlist carefully, because “there were a couple of clunkers back in the ’90s.”

Maddie, meanwhile, takes a few panicked gulps of air and then runs out to throw up in the ladies’ room. Scarlett follows her and assures the guilty-feeling teen that her mom’s coming to see Clay play didn’t directly lead to the accident. While Rayna’s four-hour surgery is going on, Maddie retreats to Clay’s car — he’s dutifully waiting in the parking lot — and asks him to drive while she cries.

CRASH POSITIONS | Everyone else — Deke, Daph, Scarlett, Gunnar, Bucky and Will (oh hey, Will!) — hang out in the waiting room until Rayna’s surgeon comes in to say that everything went well and that, with rehab, Big Red should be OK. Yay! And when she wakes up, Rayna tells a relieved Deacon that she really wants a cheeseburger… and she’s starting to recall details about her ordeal. It’s a lot like the last time she woke up in a hospital bed after a crash, she says, except “What’s different now is that you’re right here next to me. That’s just the sweetest feeling in the whole world.” Then she holds a brief business meeting with Bucky and demands that Deacon get his guitar, because they’ve got some songwriting to do.

He gently says no, but she’s insistent that they write a coda to the album, one that makes it clear that their relationship hasn’t all been about pain: “We’ve got to write that beautiful story,” she says, drugged but sincere.

MOM TALK | Deacon texts Maddie to let her know everything is OK. She and Clay are walking on the bridge where her dad proposed to Rayna… y’know, the second time, not the drunk time that ended with the throwing of jewelry. Maddie muses about a day when she and Rayna were walking on the bridge together, and Maddie realized for the first time that her mom was a person outside of being her primary caretaker/punching bag. Clay chimes in that life with his mom was always a “rollercoaster.” (Side note: I realize this is so not the point of this episode, but I’m still not loving Clay. He feels like everything I thought was interesting about guys when I was 15… but later realized was either emo-boy posturing or gigantic red flags. Maybe that’s the point?)

JULIETTE ARRIVES | When Juliette learns what happened to Rayna, she pushes right past the nurses and barrels into Big Red’s room. The country divas engage in some gentle ribbing (JULIETTE: I don’t want to talk about me right now. RAYNA: But you’re so much better at it than I am.) before Rayna dreamily notes that her former frenemy has changed. “It’s like when you fell outta the sky, something shook out of you,” Rayna explains, wondering what will shake out of her when all is said and done. “Somethin’ good,” Juliette says quietly. What a gorgeous, intimate scene for the two of them. I wish we’d have had more of these.

The next morning, Deacon brings his beloved a smoothie and a cheeseburger, which she downs handily, and everything seems like it’s going to be OK… until Rayna starts seeing her dead mom — played by Carla Gugino (Wayward Pines)! — sitting in the chair next to her bed. “I’ve really missed you,” Rayna says, crying, then telling her mama that she and Deacon need to write another cut for their album. But VisionMom disagrees, saying, “Maybe this song is finished.” Guys, I don’t think she’s talking about music. Reba take the wheel!

After Deke comes in and sees Rayna talking to an empty chair like she’s Clint Eastwood at the 2012 Republican Convention, he freaks — but Rayna’s doctor says nothing is wrong. So other friends come to visit, like Scarlett who evokes one last burst of feminism in the feisty invalid when Rayna points out that women often find themselves the objects of relationships instead of equal partners in them. “We get to choose, too,” Ray says. “We get to choose to be happy, because we deserve it.”

I’D GO CRAWLING DOWN THE AVENUE | After a sweet interlude with Daphne — as they lay next to each other, Rayna reminisces about how she used to nap in the same bed as her younger daughter back when they were traveling on tour buses — Daph’s crush Finn organizes the school choir to sing in Rayna’s room so she can hear Daphne perform her solo. Their acapella version of Bob Dylan’s “Make You Feel My Love” is gorgeous. It’s perfect. And it also is the soundtrack of the beginning of the end.

While Daphne sings her heart out, Deacon notices that Rayna’s not doing OK. Soon, the medical staff is pushing the kids out of the way to get to Rayna, Deke is panicking, monitor alarms are going off and this? This is the exact moment that Michael Ausiello noticed my emotional state and messaged me, “Please don’t try to hug me.”

Rayna is immediately wheeled to the Intensive Care Unit. Deacon texts Maddie, who’s stuck in traffic after spending the night at Clay’s, and tells her to get back now. So she gets out of the car and runs toward the hospital. In the ICU, a doctor explains to Deacon that Rayna’s kidneys are shutting down because tissue from her bone marrow leaked into her circulatory system, and all they can do is wait and hope everything straightens itself out. He sneaks into her area when no one’s looking, and Rayna makes him promise he’ll be strong for the girls “if something happens.” He kisses her on the mouth as the nurses rush in to tell him to leave, and that’s when he breaks a little. “Don’t leave me!” he cries. And when Rayna replies not with “I won’t!” or “It’ll be OK” but “I’m sorry,” that’s when it becomes clear, at least to me: She’s dying. 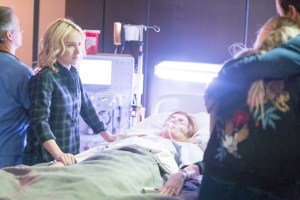 THE END | Daphne realizes the same thing when she winds up outside Rayna’s door, and Deacon just holds her as she completely falls apart. Juliette, who earlier in the episode complained that her leg felt like it was “rotting” but who just got good news that she’s fine, makes her way to the ICU with Avery in tow and figures now is as good a time as any to dump her crutches and walk on her own. So, she does. She kisses a comatose Rayna on her forehead and whispers, “All I ever wanted was for you to be proud of me,” which is sweet and all but which struck me as a very melodramatic moment in an episode that otherwise felt very real. Gunnar, Scarlett and Maddie also show up, and there are a whole lotta tears all around.

Later, it’s just Deacon, Maddie and Daphne sitting by Rayna’s bed. When the younger sister says she doesn’t know what to say to her mom, Maddie starts singing, “A Life That’s Good” in a cracked, teary voice. Daphne joins in, harmonizing. Deacon adds his voice on the line, “I don’t need faith.” IT IS GORGEOUS AND EXCRUCIATING AT THE SAME TIME. As they hit the part about “Two arms around me, Heaven to ground me,” Rayna opens her eyes and sees them for the last time. Then she closes her eyes, flatlines and dies.

The girls start sobbing, lying on top of their mom, and Deacon can’t do anything but collapse on top of them. The nurses come in to try to resuscitate, but it seems like a formality. The camera closes in on Deacon’s face, gripped in grief, as a tear slips out.

Now it’s your turn. Did you ever think Nashville would really kill Rayna? Hit the comments with your thoughts.