If you’ve got candles, Nashville fans, now would be a good time to light ’em.

Because Rayna Jaymes, the First Lady of Country Music and keeper of Deacon Claybourne’s heart, survives an attack by a crazed stalker in this week’s episode… only to be involved in a terrible car crash in the hour’s final moments.

It doesn’t look good for Rayna as the episode closes, and that preview of next week’s installment isn’t very comforting, either. And I don’t care how many Scarlett-boning-Damien scenes or teen-coming-of-age storylines you throw at me elsewhere in the episode to lighten it up, Nashville: I’m gonna be worried for the next six days and 23 hours, thank y’all very much.

Read on while we cover the highlights of “Stand Beside Me.”

UNWELCOME GUEST | Good news: Deacon and Rayna are about to start laying down tracks for their new album! Bad news: Carl Hockney, the crazy fan stalking Rayna (as opposed to the crazy fan who worked for her or the crazy fan who’s currently financing her record label) made bail and is a free man.

To guard against another incident, Rayna and Deacon hire body guards to shadow them and the girls (much to Maddie’s dismay). But beefing up security suddenly seems like a good idea when Hockney decides to stand outside Rayna’s front gates — which are just far enough from the house to be outside the distance dictated by the order of protection — and taunt the family with his presence.

Deacon is ready to shove his six-string where the sun don’t shine, but the security guards talk him down. “He wants your attention, and he’s getting it,” one of them says, assuring the worried couple that Hockney eventually will slip up, and when he does, they’ll have him arrested again. He advises Rayna and Deacon to go about their lives and “think of him like a terrorist.” Because I know I would be super able to focus on my daily life, knowing that there’s a terrorist parked outside my perimeter…

ARE YOU THERE GOD? IT’S ME, DAPHNE | Actually, scratch that: There’s at least one member of the household with more pressing issues on her mind. Daphne gets her period for the first time at school, and though she retreats to the girls’ room and makes a frantic call to Maddie, it’s Rayna who shows up at school with a change of clothes and a “my baby’s growing up!” look on her face.

Daph is mortified, later taking out her anger on Maddie, who couldn’t leave her internship and therefore called Rayna to sub in on the menstrual rescue mission. “I get that you’re having a tough day, but you can’t be treating me like this. I did nothing wrong!” Mads yells at her sister, and MY HOW THE WORM HAS TURNED.

And when Deacon is clued into what’s going on, his dad-ly discomfiture is quite cute. Rayna suggests that she somehow commemorate Daphne’s maturation, which prompts this discussion.

DEACON: Let’s throw her a party.
RAYNA: A period party?
DEACON: Is that not a thing?
RAYNA (with that “bless your heart, you silly man” look on her face): No, honey. That’s not a thing.

But then he pulls her close and says, “Good god, I love you” all low and growly, so they make out, then sneak off to shag.

Oh, and Rayna gets Daphne some jewelry as a “first moon gift,” because apparently this show is engaging in a Game of Thrones crossover of which I was not aware. Will the girl be promised to Tyrion on the morrow, then?

THE EXES LIVE UP TO THEIR NAME | Scarlett can’t figure out whether or not she should still be with Gunnar. Deacon tells her that she’s an adult, and she should do whatever the heck she wants. And apparently, she wants to do Damien. So after breaking up with Gunnar after telling him that she feels “numb” about him — yeah, it goes over about as well as you’d expect — she winds up at the British director’s hotel room, where they have sex and eat waffles. 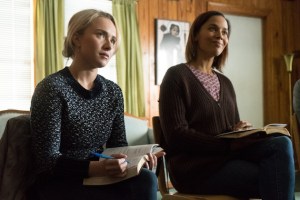 IN WHICH JU OVERSTEPS | Juliette approaches the choir at Hallie’s church about performing on her gospel album. And even though she’s been going to Bible study and is generally welcome at the house of worship, her request that the group sing with her rubs a few members the wrong way. When pressed, Ju admits that she’s only been attending services of any kind for the same amount of time that she’s been listening to gospel: just a few months. “I feel like I’m transported when I listen to your music,” she says, but she sounds way out of her depth, and one of the women calls her out on it: “You know this is black music, right?” It gets heated, and things go downhill fast.

When Ju goes back, much calmer and far more humbled, she shares that she’s sinned a lot in her life, and that Hallie and her faith community came along at a time when Juliette was at rock bottom. “I don’t want to steal from you, I want to honor you,” she says quietly. “I want to honor God and his mysterious ways.” And if they don’t want to record with her, she’ll still come back — but “I realize I’m just a guest here.”

Apparently, her repentance is enough to win over the holdouts. “Come on back, girl,” a choir member named Vonetta calls, smiling, as Juliette starts to limp away. “Don’t we gotta figure out what you want us to sing?”

WORST NIGHTMARE REALIZED | Maddie attends Clay’s show at The 5 Spot, and so does Rayna. After the show, Ray tells her daughter’s boyfriend that she’s impressed with his talent, and she invites him by Highway 65 for a conversation about his future (think advice, not a record contract). He’s happy, Maddie’s smiling, and they leave — with a security guy in tow — as Rayna goes to Highway 65 to do a little work before hitting the studio with Deacon.

Rayna’s security guy sweeps the building… but apparently misses the broom closet where Hockney has been hiding since the previous afternoon, because the insane-o walks right into Rayna’s office once she’s alone. (Side note: Worst. Security. Team. Ever.) Hockney is unhinged, rambling, red-eyed and twitchy, holding a kitchen knife and asking Rayna to call him “Wayne” — his middle name — while explaining that he knows from her music that she’s the only one who understands him.

Rayna is so, so scared as she tries to humor him, getting him to put away the knife as she says that Deacon goes by his middle name, too. (Totally-unimportant-at-this-moment side note: Did we know this? I feel like I did not know this.) It comes out that Hockney has abusive parents, so Rayna shares her own story about her sociopath dad who had her mom killed — oh yeaaaah, remember that? — but it’s mainly so she can cover pulling her phone from her purse and dialing 911.

Carl/Wayne flies into a rage when he realizes what she’s done. “I have two daughters who need me. That’s all I care about right now,” she says, dropping the sympathetic act. As he grabs her and pulls the knife out, the Nashville police department gives Ray’s security guys a heads-up that they might wanna check out what’s happening inside. The guards run in, guns drawn, and find Hockney with his knife to Rayna’s throat. It’s tense, but then Carl/Wayne apologizes and lets her go. The security dudes tackle him while Rayna bends in half and begins to sob.

ALL’S WELL THAT ENDS… | Next thing we know, she’s draped in a blanket and being loaded into a police cruiser that’s going to take her home. She pulls out her phone and calls Deacon, crying so hard that he can barely understand her. “Something terrible happened, but it’s OK. I’m OK. I’m coming home,” she says amid the gulps and wheezes. Deke, understandably, is confused and on the verge of losing his stuff. “Come home, baby,” he says, worried. And that’s when a pickup truck (oh god) T-bones (oh god oh god) Rayna’s car (oh god oh god oh god).

The accident is shocking, juxtaposed as it is with the end of the Hockney storyline: If anything bad were going to happen to the Red Queen, most of us assumed, surely it would’ve come at the crazy man’s hand, right? But because we’re lulled into a false sense of security — well, unless you were present for Vaughn’s extraction scene in Alias‘ fourth season finale — the moment of the crash is super jarring and quite upsetting and I would like someone to hold my hand until at least the midseason finale, please and thank you.