It’s time for The Exes to be exes again.

Look, it’s OK. Not every Nashville couple is going to be the second coming of Deacon and Rayna. And Scarlett and Gunnar have been trotting around the relationship ring so long, even the rodeo clowns are bored with their on-again, off-again romantic shenanigans. It’s time for those particular ponies to gallop off in different directions, because they’re no good together anymore.

Read on for the highlights of “Hurricane.”

TOO MUCH, TOO SOON? | Let’s start with those former Bluebird staffers, who can’t seem to connect after their very popular music video hits the Internet. While Gunnar and Scarlett are sitting at a diner, she gets a call from NBC and he gets one from AfterBuzz Nashville; both media outlets want them for big opportunities. (Side note: No way would either of those places call the artists directly. That’s what PR machines are for. But whatevs.)

I’m not going to wonder why the Today show’s fourth hour — that’s the Kathie Lee and Hoda section, for those of you scoring at home — would devote an entire segment to an up-and-coming country band’s first music video. I’m not going to ponder why they’d invite the director of that video in for the interview, as well. I’m going to assume that Damien’s publicist has some dirt on Kathie Lee, and I’m going to leave it at that. Anyway, Damien touches Scarlett’s bare shoulder during the interview, and while she doesn’t pay it much attention, Gunnar certainly does.

So when Damien asks them both out for dinner, Gunny does one of those, “Go if you want to I don’t even care whatever GOD!” things… and she goes. By the time they’re on dessert, it’s clear that Damien isn’t even trying to hide the fact that he’s totally coming on to the pixie-haired singer. Thing is: She’s totally into him, too. 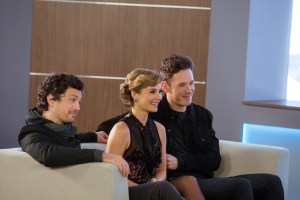 GLUTTON FOR PUNISHMENT | By the time they bump into each other outside Highway 65, where Damien is going to say goodbye to Rayna before he leaves for another gig, Scarlett has forgiven every single ridiculous, hurtful, assumptive thing the director said to her during the “All of Me” shoot. He kisses her. She likes it.

And she tells Gunnar about it soon after, adding that she has feelings for Damien. “That’s not exactly breaking news,” Gunnar says, hurt. “The question is: What are you going to do about it?” When she replies that it doesn’t matter, because Damien is gone, can you blame Gunny for getting all huffy?

“OK, I need you to grow up. I am with you. Does that mean anything to you?” Scar says, and eventually sexes him back into submission, but things are not OK between the two of them. (Based on the series of texts Damien sends to Scarlett while she and Gunnar are between the sheets, everything’s about to get more difficult: Damien is staying in town, and he “need[s] to see you.”)

Perhaps more problematic? When Scarlett is walking with Gunnar, a woman recognizes her from the video and asks her to sign a CD — yet completely ignores the male half of The Exes. Get ready, Gunnar: Scarlett is on her path to Gwen Stefani-dom, while you’re just that dude from No Doubt. (No, the other one.)

BETTER TOGETHER | Rayna and Deacon spend a lot of this week’s episode rehashing the “We should make an album based on our relationship!”/”That is the worst idea ever!” argument, but by the end, they make up and write a beautiful duet called “My Favorite Hurricane.” Really, the most important thing you should take away from the R&D portion of this week’s episode is that they have a stand-up makeout sesh up against the back of a bowling alley and it is [fire emoji]] [tabasco emoji] [cat with heart eyes emoji] [sriracha emoji] [recapper fanning herself emoji].

Meanwhile, Zach wants a filmmaker to document Rayna and Deacon’s songwriting process, with the footage to be used to promote their album. Once more, Rayna and Deacon act like the guy with the camera is somehow there to ruin their lives; at one point, Rayna literally yells at him to get out of the kitchen like he’s a dog with a dead cockroach in its mouth.

Too bad the filmmaker’s not there when Clay comes over, he and Maddie go upstairs and Daphne forgets to take a cake out of the oven: The burned pastry sets off the fire alarms, which causes the alarm system to call Rayna and Deke. They arrive to find fire trucks in their front yard and Maddie all, “What? It’s no big deal.” Clay also uses the awkward interaction to even more awkwardly tell Deacon what a fan he is. And poor little Daphne feels left out of the whole thing. Later, she laments that sometimes her folks don’t seem like they’re in love… while the filmmaker is shooting. When he presses, she clams up.

Now it’s your turn. Do you think Scarlett let Damien off the hook too easily? There’s no way that footage of Daphne isn’t going to bite Rayna in the buns later on, right? Did you miss Juliette, Avery and Will? And wasn’t it fun to see Rayna and Deacon actually singing together again? Sound off in the comments!