Question: Now that Rayna’s dead on Nashville, is Juliette going to be the show’s lead character? —Roopa
Ausiello: We asked co-showrunner Marshall Herskovitz whether the CMT series was planning to bring on another female to play opposite Deacon or to challenge Juliette. “Yes, the weather is nice today. I just can’t comment,” he responded, laughing. “This has always been an article of faith between [fellow showrunner] Ed Zwick and me, that we feel that the experience of watching a show is altered when you know what’s coming. The most important thing for us is the audience’s experience of the show itself.”

Question: What can you tell us about the new mystery man in Bernadette’s life on The Big Bang Theory? —Doug
Ausiello: He’s a handsome devil, for one. For two, he’s very easy on the eyes. And for three, I wouldn’t kick him out of my bed. All joking aside, he’s kinda cute, right?

Question: Loved the photos and video from your Big Bang Theory set visit. Did you happen to come upon any scoop while you were there? —Darren
Ausiello: As a matter of fact, I did. The episode I was observing — which is scheduled to air on Thursday, March 9 — marks the return of Christine Baranski as Leonard’s mom Beverly. Without giving too much away, the renowned shrink helps Sheldon navigate a personal issue and unwittingly lobs a grenade on her son’s marriage to Penny.

Question: Been wondering about this “theory”: Do you think The Big Bang Theory would ever make Raj and Stuart a couple? Why not… they have good “chemistry”! —Gina
Ausiello: Coincidentally, I observed the two of them getting very cozy on a couch during the aforementioned March 9 episode. (Also, if I catch you OD’ing on the puns like that again I’m going to ban you from TVLine for life.) 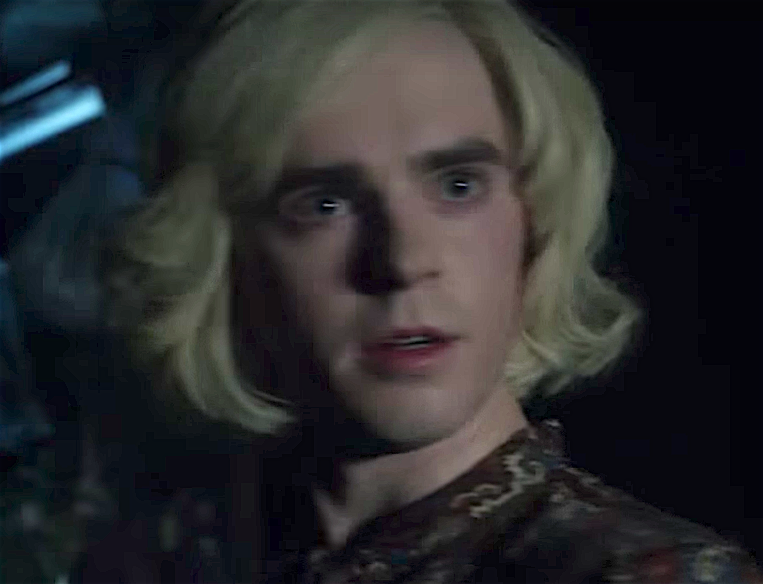 Question: How long will we have to wait before seeing Norman in full-tilt-Norma mode on Bates Motel? —Andrew
Ausiello: We got a little taste of it this week. And per EP Kerry Ehrin, there’s a “substantial amount” of Norman-as-Norma still to come. Speaking of which, how did she react upon seeing Freddie Highmore all decked out in wig and heels the first time? “It was a sheer delight,” she enthuses. “He looked so good and [channeled her] so perfectly literally every time. And when that shot [in the trailer] comes up of him in the wig, I just laugh. I just love it so much. It makes me so happy.”

Question: Any new song scoops for the Once Upon a Time musical episode? —Sheri
Ausiello: Someone has a solo number that is quite… wicked.

Question: I’m so excited to see Teri Hatcher on Supergirl! How much longer do I have to wait? –Camille
Ausiello: Not much longer, Camille! According to executive producer Andrew Kreisberg, Hatcher’s character — which remains shrouded in mystery — pops up in Episode 15. As for whether or not you can expect to see her sharing the screen with former Lois & Clark co-star Dean Cain, Kreisberg says that everyone involved wants it to happen, adding “there’s a plan” in the works.

Question: Any word yet on if/when Calista Flockhart might be reprising her role as Cat Grant on Supergirl? —Avery
Ausiello: I wouldn’t put money on seeing Cat again this season. But if you do, keep the wager under $1. 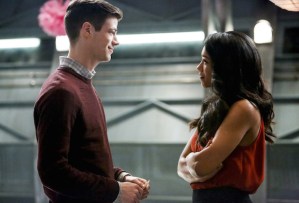 you can tease about Iris’ role in the Supergirl/The Flash musical crossover? —Fowsia
Ausiello: “She plays a pretty key role in the musical episode (airing Tuesday, March 21). The story really centers around Iris,” co-showrunner Aaron Helbing tells Matt Mitovich. He then reiterated, “Aside from Barry and Kara, Iris plays a huge role in the musical.”

Question: Got anything on The Walking Dead? —Sam
Ausiello: Although Morgan remains so committed to not killing that he advised Ezekiel not to involve the Kingdom in Alexandria’s looming war with the Saviors, his live-and-let-live policy is about to become even “more of a struggle for him,” showrunner Scott Gimple recently told TVLine. “He thought that he had found [in the Kingdom] a place that worked for him, where he didn’t have to worry about killing or not killing. But in this world, [that issue] always finds him.”

Question: You never give us spoilers on the show with the main character that’s shares a first name with you. Why not show some love to Suits. —Shanna Banks
Ausiello: It sounds like a certain redhead will be at the center of a cliffhanger in this week’s season finale. Teases Sarah Rafferty of Wednesday’s closer: “There’s an ambiguousness, in terms of Donna’s future, on many levels.” 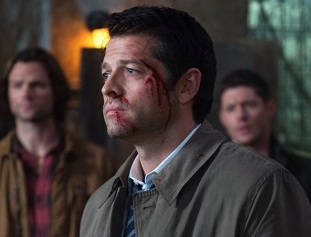 Question: It’s been a while since I asked, so do you have any scoop on Dean for the upcoming episodes of Supernatural? —Joanna
Ausiello: Would you settle for something Cas-related instead? No? Too bad, ’cause that’s all I got. If you’re wondering whether Cas killing Billie the Reaper will have cosmic consequences — specifically for the angel himself — you’re not the only one. “As I’m reading upcoming scripts and seeing what’s happening to the characters, I have been asking myself that question, as well,” Misha Collins tells TVLine. “As far as I’ve seen, it’s not resolved yet. But there are a lot of things that crop up that I interpret as possibly having been cosmic consequences of that action.”

Question: I’ve been loving Riverdale, a show which seems to be getting stronger with each passing episode. Any news you’d like to share about upcoming plot twists and turns? —Dave
Ausiello: Lili Reinhart isn’t kidding when she says this Thursday’s episode is a “big” one “for Betty in regards to finding out more about what happened with Polly.” Get ready for several juicy Cooper family twists when we finally get to meet Betty’s big sis. Meanwhile, the introduction of Josie’s overbearing father (played by Reese Alexander) leads the Pussycat to bond with Veronica over their mutual daddy issues. “It’s actually one of my favorite scenes in the show is me and Josie at Pop’s,” actress Camila Mendes shares. “It’s a really sweet girl talk.”

Question: Anything on the final batch of Bones episodes? —Claire
Ausiello: Even though General Radic’s son Kovac has been apprehended, it doesn’t mean Booth and Brennan are out of danger. “You’ll see how he wields his power,” co-showrunner Michael Peterson warns. “That’ll start in [Episode] 11 and really play out in a big way in [Episode] 12.”

Question: Can you give us a hint on when we can expect Felicity’s arc to ramp up on Arrow? —Jenny
Ausiello: Soon-ish. “We really started the season wanting to have her go through some version of her own island in some way,” explains EP Wendy Mericle. “We really wanted to take her to place where she would sort of understand Oliver in a more profound way.” BONUS SCOOP: “You definitely haven’t seen the last of Vigilante,” teases fellow EP Marc Guggenheim.

Question: I saw Blue Bloods‘ Will Estes posted a picture with Sarah Mezzanotte on Instagram captioned, “My new partner!” What is going on? Where is Eddie? —Trenton
Ausiello: Worry not. We checked into Mr. Estes’ provocative pic and learned that Mezzanotte (Royal Pains) is merely guesting in one episode.

Question: Should fans of Netflix’s One Day at a Time be worried about its renewal chances? I feel like Netflix is usually quick about renewals. —Jared
Ausiello: Netflix doesn’t play by traditional TV rules when it comes to renewals (or even cancellations for that matter). But as I’ve said before, One Day at a Time will be back for a second season. In fact, I’d wager a ten-spot that we’ll hear about a pickup before the next Ask Ausiello drops. (And no, I would never delay an AA column just to be proven right. How dare you.)

This AAnd That…
♦ We’re barely  out of February and already I have two insane entries for my May Sweeps Scorecard. I usually launch the spoilery beast of a cheat sheet in April, but I may pull the trigger on it sooner. What do you think?
♦ I just caught wind of what’s going down in the Grimm series finale and I’ve got six words for you. The first two are holy and frak, and the last four are The Wizard of Oz.
That’s a wrap! Please send questions, comments and anonymous tips to askausiello@tvline.com. (Additional reporting by Vlada Gelman, Kim Roots and Andy Swift)