Is Once Upon a Time staging a musical battle between good and evil? Will Bones ride off into the sunset? Will a robbery uncover an NCIS agent’s secret? Read on for answers to those questions plus teases from other shows.

Since you were first to share the news about Once Upon a Time’s musical episode, do you have more info? Is our Queen going to sing? —Lisa
Aww, flattery will get you everywhere, Lisa. It will also get you this confirmation that Lana Parrilla will be among those belting a tune. After all, what would a musical Once episode be without a clash between the show’s original rivals — in the form of a grand (and royally entertaining) sing-off between the Evil Queen and the Charmings? Because I hear that is happening, folks.

Can you please ask if Once Upon a Time‘s Archie will return in the second half of the season? —Becky
Yes, he will.

What can you tease about Eve/Juliette’s journey on Grimm? —Jen C.
Bitsie Tulloch tells us that Eve — who’s becoming more and more like Juliette these days, eh? — has “an intimate connection” with Adalind and Renard’s daughter, Diana, “that is unexpected.” 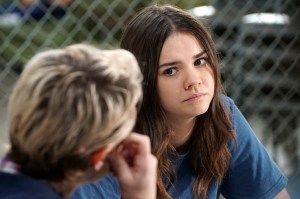 with The Fosters‘ Callie? —Marissa
You mean besides her big legal battle and potentially going to prison? An upcoming episode will find Callie getting involved with Girls United again. “Through Stef, we’re actually going to meet a new girl that gets into” the group home, executive producer Joanna Johnson previews. “We’ll go on a journey with this girl that will intertwine with Callie, as well, a bit.” The storyline also features the return of an old friend. “Daphne’s actually taken on a counselor role [at Girls United], and it’s amazing to see her progress,” star Maia Mitchell shares. “You’re going to see Callie supporting Daphne through that.”

I’ve been a fan of Bones from the beginning. Can you tease if Booth and Brennan will get a happy ending? —Elspeth
That does seem to be the million-dollar question, especially leading out of this week’s Episode 7. And it looks like you may be guessing until the final hour. “Episode 11 ends on a cliffhanger, I’ll say that much,” shares co-showrunner Michael Peterson. “The finale is a two-parter.” As for the happy ending fans seek, the EP offered this anecdote from his four-season binge upon joining the series. “After watching 67 episodes, my wife asked if [series creator] Hart [Hanson] was a hippie, because everything worked out. [For example, when] Wendell slept with Angela, Hodgins got along with Wendell by the end of the episode. Things work out. Hart’s very much a ‘people ride off into the sunset’ kind of guy, he’s an optimist, and we wanted to infuse that into the finale. We wanted to have them go through hell, but at the end, we want them to ride off.”

Any scoop on Quantico? –Sam
When we asked showrunner Joshua Safran for a clue about Hunter Parrish’s mysterious role, all he offered is this: “He is connected to this show in a way that is very obvious.” Make of that what you will.

Any scoop you can share on Season 2 of The Detour? –AOC
The family will be based in New York City this season, but at least one member is not looking forward to life in the Big Apple. “For Robin, at least, there are some maybe not-so-legal things that she has to grapple with, coming back to bite her in the ass,” Natalie Zea teases. 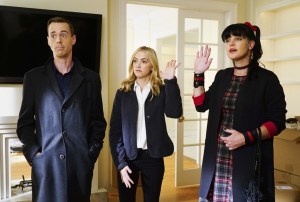 about NCIS‘ McGee and Delilah would be appreciated. —Larry
Oh, Delilah’s fiancé will have his hands full in the March 7 episode, when he returns home to the apartment he’s subletting from DiNozzo to find a robbery in progress. Turns out that the perpetrator of the triple-homicide that made the digs so nicely priced hid something of value there — and considering that McGee never looped Delilah in on the apartment’s “checkered” past, he’ll have much ‘splaining to do when she gets back from assignment in Dubai.

Will Adrian be back in Season 2 of TNT’s Animal Kingdom? —Davina
Yes, Spencer Treat Clark will be back as Deran’s… “ex”?

Do you know the name of the song that was played at the end of the Feb. 1 episode of Criminal Minds? —Maria
As Reid used a scarf to tether himself to his sleeping mother, that was “Amanda’s Song” playing, written, produced and sung by post supervisor Jason Koiter.

Got any scoop on Switched at Birth? — Kayla
As TVLine previously reported, Episode 100 (airing Tuesday, March 21) will feature the improbable return of Gilles Marini’s Angelo… as a ghost? Vision? Flashback? This is all executive producer Lizzy Weiss would share: “It is a very emotional episode in which Angelo revisits the family in a way.”

What’s up with new guy Riley on The 100? Everyone seems to know and love him. Will we find out more about his relationship with Clarke? —Kate
Funny you should ask about Riley and Clark’s relationship, because it definitely takes a turn in Wednesday’s episode — and not for the better. Without giving too much away, let’s just say Riley isn’t a fan of Clarke making life-or-death decisions on everyone else’s behalf. 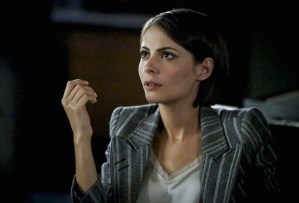 anything coming up on Arrow? —Justin
Finally returned from that dreaded conference (and with her sharp tongue wonderfully on display), Thea is “headed in a direction that’s very similar to where her mother was before she was killed in Season 2. We’re excited about it,” says co-showrunner Wendy Mericle. “She’s been dealing with all of these issues the same way Oliver has — with her bloodlust and with other elements of her past — and this season’s going to find her in a similar place but for very different reasons..” EP Marc Guggenheim promises “some really terrific Oliver/Thea scenes in next week’s episode and beyond,” including what Mericle deemed “one of my favorites on the show.”

Long time no Supernatural scoop! Care to remedy that? — T.J.
Hmm, that’s a fair cop. Next Thursday’s episode, which features the return of Crowley’s son Gavin, is “a big one” for the King of Hell and his mother Rowena, actress Ruth Connell says. “You finally get to see more of the familial relationship with the three of them” — as well as some “borderline shocking” moments.

Anything about Timeless‘ season finale? —Rory
I hear there’s a twist you’re gonna slap yourself for not seeing coming.

Do you have any information on when Starz’s American Gods, NBC’s Midnight, Texas and AMC’s The Terror make their debuts? —Knight of Ren
TBA, TBD and “absolutely in 2017.” Always here to help!

Real questions, real answers! If you need the Inside Line on a favorite show, email InsideLine@tvline.com! (With reporting by Vlada Gelman and Kim Roots)