Nope, Quantico, I’m not going there with you.

This week’s episode doubles as the fall finale, and there’s a rather large revelation in its final moments: During a fist fight with an anonymous member of the Citizens’ Liberation Front, Alex pulls off her aggressor’s mask only to find that she’s been beating up her onetime fiancé, Ryan.

What we will likely learn once the ABC drama returns in the new year: Ryan is still a white hat, and he’s either still under the deepest of covers for the CIA or FBI or PTA or whatever. What I would like to happen: Ryan is actually a bad guy, and he’s one with staying power.

Wouldn’t it be awesome if, all this time, Captain America with the pretty eyes was actually a nefarious agent working a very long, super dangerous con? And unlike Liam last season, he’s smart/sane enough not to get caught? That way, Alex would have to outwit an enemy who has intimate (bow-chicka-wow-wow pun intended) knowledge not only about every aspect of her life, but also about everything she knows — and everything the people she works for know.

Then again, I fell for the Drew-is-the-bad-guy fakeout last season, so what the heck do I know?

RELATED Once Upon a Time Recap: One Crazy Twist After a Mother!

Read on for the highlights of “ODENVY.”

THE UNKINDEST CUT | In The Farm timeline, Alex and Ryan are about to get it on at the safehouse. But their clandestine nookie is interrupted by a call for Ryan from Nimah, which irks Alex: Where’s Shelby been, and why are they now meeting separately with their handlers, she wonders? Nimah gives her no real answers; after Alex leaves, Ryan makes it clear that he wants to tell his lady that he’s been tapped for the AIC. But Nimah shuts that down and asks who else he thinks might’ve gotten recruited for the secret group. They discuss Sebastian (who, we learn, has been sleeping in Leigh’s old room), Harry, León and Dayana.

Meanwhile, the lesson of the week concerns cutting people you love out of your life if their inability to accept your cover story will endanger your mission. “Burn the bridge with the one person who never lets go,” Owen tells his students as he dismisses them for Thanksgiving. God bless us, every one! But Owen’s “one person” is about to burn a bridge with him: Though he pays lip service to wanting to be closer with Lydia, he takes the very first opportunity to sneak through her bag when he thinks that list of his enemies is on it. But it’s a trap, and she catches him in it. “You made your choice,” she tells him, preparing to leave The Farm. But before she goes, she gives him the answers he seeks: There was no conspiracy to oust him from the field, “You just got burned by something you did.” Ouch.

In a similar moment of Real Talk elsewhere, Alex confronts Shelby about avoiding her, and that’s when Parrish learns that Shelby is in the field and Alex is being yanked from the mission. “You didn’t cut it, Alex. You failed,” Shelby says to her “best friend,” a burn which is right up there with Clueless‘ “You’re a virgin who can’t drive.” When Miranda later assures Alex that she has a job at the FBI, Alex turns her down and says she’ll get to the bottom of AIC on her own, thanks.

AMERICA’S BLOODIEST HOME VIDEOS | Ryan gets a text that asks him to be at a certain place at a certain time. When he gets there, another text tells him to kidnap a man and take him to another location. He’s later beckoned to another meet-up, this one with Dayana and León. And that’s when we find out that they’ve all been recruited — and their test was to get that random guy to a secret location (Ryan), to kill him (León) and to clean up the mess (Dayana). But the AIC also took video of the whole thing. “Now we can trust you,” the group texts the trio, “because if you betray us, we will destroy you.”

Too bad that shortly before all of this, Ryan proposes to Alex at the safehouse, and she accepts. “Even if I have to lie for a living, I have to know I can come home to the truth, and that truth is you,” he tells her before sliding the ring on her finger. They kiss exuberantly. And there are so few moments of pure joy on this show, I roll around in Alex and Ryan’s happiness like a Labrador in a fresh rain puddle. 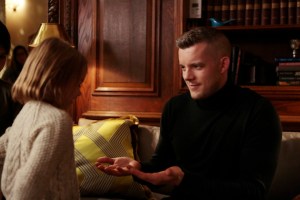 WHAT ELSE IS HARRY HIDING? | Harry spends the holiday with Charlotte, who is the sister of Elliott, the guy Harry told Sebastian about a while back. As it turns out, Charlotte is also Harry’s handler. They talk shop; it’s all very vague, and he gives her a coded message she tosses into the blazing fireplace when her husband comes back into the room.

Later, that husband catches Harry leaving it he middle of the night without saying goodbye. They make vague reference to something that happened involving Elliott. When the husband questions what Harry’s going to do about [whatever they’re talking about], he replies, “Your father-in-law is a very powerful man.” The husband responds, “Well, that doesn’t mean he should get away with it.” (Side note: It’s refreshing to see Harry a little more relaxed and maybe a little more truthful (?) than normal.)

FOOLED YA! | In the present, an Army general arrives at the FBI and makes a plan to bomb the building the terrorists are in. But Shelby asks her to hold off for a while, because Alex is in the building and can save the planet again. (Or something along those lines.)

Inside the building, Alex, Sebastian, Harry, León and a bleeding Dayana make their way to the roof, where they’re going to disarm the remote detonator for the biological weapon. But when a group of the terrorists gets in their way, the Farm team decides to crawl over them through the ventilation ducts. I know all of these people weigh 100 lbs., but the bad guys would still hear them, no? León stays with Dayana, and the other three get crawling. But Sebastian accidentally (or is it?) drops the canister of gas they’re going to use, and as it plummets down through the very tall building, Harry demands that Sebastian admit that he’s actually AIC and is sabotaging their mission on purpose.

Alex stops their arguing, and when they get to the roof, she realizes that the biological weapon is aimed inside the building, not outside. “It’s a suicide failsafe, not a WMD,” she says

TWIN PARADOX | If you’re wondering about the Nimah/Raina situation that started at the end of the previous episode, here’s how it resolves. Nimah spends most of the episode explaining how America is broken and freedom is a ruse, and how the CLF is the only way to get at the truth and lots of other very crazy-sounding militant speak. But even though it breaks her heart to do so, Raina cannot join her sister in the terrorist organization.

Nimah leaves her twin in one room and goes out to report to other CLF members in another: “She’s not one of them, I told you. Keep her in there until this is over.” Then Nimah sobs. I literally have no idea what is going on here.

DON’T WALK AWAY MAD | Alex and her group get outside, which naturally ends in hand-to-hand combat with CLF members. That’s when she realizes what’s up with Ryan, who takes advantage of her shock to toss her behind a laser barrier that’ll detonate the WMD if she crosses. “Everyone will die,” he says, just to drive it home, then puts his mask back on and walks away.