This week on ABC’s Once Upon a Time, Belle feared the lengths to which Rumple would go to snatch their son, while flashbacks to the duo’s Fairytale Land existence dropped one mother of a bombshell.

IN THE FAIRYTALE LAND THAT WAS…. | Rumplestiltskin returned to his castle one day and lobbed a random baby at Belle, saying the infant’s parents “no longer matter. The child is mine now.” In between reading Her Handsome Hero to the tot, Belle snoops around Rumple’s tower and finds an incantation written in fairy language, which she quickly translates. Turns out, Belle walked right into a trap, giving Rumple the translation he needed to summon the Black Fairy. After he storms off with the baby, the Blue Fairy shows up, introduces herself and charges Belle with stopping Rumple. Belle finds Rumple in the woods, where he summons 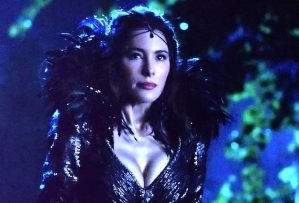 the Black Fairy (Hi, Jaime Murray!) and promptly immobilizes her with squid ink.

What’s his beef with the baby-snatching sprite? “Why did you abandon the one child that was actually yours.” And just as we start picking up what he is laying down, Black’s face goes pale: “It can’t be…” Oh, “It can be, mother,” Rumple assures. “You’d know [who I was] if you bothered to even give me a name!” As for the why of what she did, Black only gets as far as the old “choosing power over love” rigmarole before the ink wears off and she gains the upper hand. “No more answers for you today,” she gloats, before flitting away into the night, while Belle scurries off to return the boosted baby to its parents.

IN STORYBROOKE…. | Rumple sends a message to Belle & Co., by rapidly aging one of Mother Superior’s random sisters with a magical powder — intimating that he will use the same magic to fast-track his wife’s pregnancy/childbirth, allowing him the chance to sever their son’s tie to his destiny, to possibly love dear ol’ Dad instead. While poring over books/possible fixes, Belle finds herself back in the dream world, where her grown son cryptically informs her that the answer to saving him will be right in front of her, and she must be willing to see it.

Hook spots squid ink in one of Belle’s books, which he and Emma plan to use to immobilize Rumple and then rummage through his shop for the Shears of Destiny and/or the Dark One’s dagger. Alas, that plan goes south in a jiffy, when Emma is waylaid by a new vision of her bleak future, in which she can now spy the jeweled handle of the sword that will kill her.

Rumple meanwhile shakes off the squid ink’s effects and dashes to the library to confront Belle. “I cannot lose another son, not if I can help it,” he explains, dangling the magical aging dust before her. “With this son, I can start over, and maybe he can love me.” Belle warns that if he follows this path, isn’t he worried that he will lose her forever? That thought is enough to make him retreat, the aging dust left unused. The Evil Queen, though, suspected that warm, fuzzy words would dupe Rumple again, so she doses Belle’s conspicuously drunken tea at the diner, which in a flash puffs up her pregnant belly.

While in labor at the convent, Belle “visits” her grown son again, and he states, “You know what you must do.” Belle answers, “No, I can’t. There has to be another way,” but he laments that there isn’t. With a warm hug, she assures him, “I love you, more than anything in the world” — before then actually giving birth to him, and then tasking fairy godmother Blue with taking the newborn to somewhere “safe, and far, far away,” out of Rumple’s clutches “until this is all over.” Belle hands Blue the Handsome Hero book, before christening her son after its namesake: “My Gideon, strong and brave, a hero for all time.”

Rumple arrives shortly thereafter, only to see Blue flying away with his son. “I didn’t abandon him,” Belle attests. “I gave him the best chance at a good life, without you in it.”  Rumple asks their child’s name, but Belle’s lips are zipped. “I will never hurt you, Belle,” he makes clear. “But I will find our son.”

Later at the shop, Rumple warns the Evil Queen that he plays “a very long game,” and that she will pay for expediting Belle’s pregnancy against his wishes. But the queen has little concern for the man who has yet to avenge his first son’s murder without her help. #Burn

* After telling Snow about the magic lamp Aladdin found — and her concerns about unleashing a possibly problematic genie — Jasmine gives the treasure a rub. But instead of a genie popping out, all she gets is a pair of gaudy cuffs — which Aladdin slaps on, to serve as her wish-giver (enslavement to the lamp be damned).

* The Evil Queen went to kill her sister, but Regina intervened by crushing their shared heart some. Afterward, Regina dropped some truths on Zelena — that she was not there to make nice nor to save her, but to steal some magic. Turns out, she still very much holds Robin Hood’s death against her sister. “I could pity you, I could hate you, I could spare your life, but I could never forgive you,” Regina makes clear.

* After Rumple trashes his shop after the aforementioned confrontation with the Evil Queen, Emma and Hook arrive to look around for clues about her new vision — and immediately lay their eyes on the tell-tale sword, possessing a red glowing jewel in the handle. Now that they have the murder weapon, they intend to find out who will be using it — and if they can stop it.

What did you think of the episode “Changelings”?